The first eight years of a child’s life are not only the most important years of a child’s life, but also the most rapid period of human development throughout a human life. These years are critical to the emotional and physical growth of a child. By the age of four, half of a person’s intelligence potential has already been developed and early childhood experiences can have a lasting effect on personality, behavior, and learning. (Early, 2001) These first eight years of life are broken down into the first two years, early childhood, and middle childhood.

Turn in your highest-quality paper
Get a qualified writer to help you with
“ Brain Development ”
Get high-quality paper
NEW! AI matching with writers

Throughout these three stages of life, the brain does most of its developing and determines the life that person will lead. The developing of a child’s brain falls upon the interactions and experiences a child has with its parents and any other primary caregivers in the beginning of life. During the first two years of a child’s life, a lot occurs in their brain which is essential to their life.

When a child is born, about seventy percent of their neurons are located in their cortex. (Berger, 2010) In an infant, the cortex is made up of thin layers of tissues that cover the brain and make the thought process possible. The layers related to the basic senses tend to mature pretty early in an infant’s life, but the prefrontal cortex is one that matures late. The prefrontal cortex is responsible for anticipation, planning, and impulse control and is practically inoperative during the first few months of life.

It doesn’t start to mature until childhood and continues to through adolescence and adulthood. (Boyd, 2010)

Areas of the brain are very important for basic needs to live such as breathing and heartbeat deep in the skull. Emotions and impulses are controlled somewhere in the middle of the brain and perception and cognition are in the cortex. Even though at birth the brain contains more neurons than it needs, it contains fewer dendrites and synapses than it will obtain throughout life. In the cortex, the growth of synapses, axons, and dendrites takes place quickly in the first months and years of an infant’s life. This causes the brain weight to triple by the age of two. In addition, five times as many dendrites and one hundred trillion synapses are present by the age of two. This large growth of dendrites is followed by pruning. Pruning is the process by which unused connections in the brain atrophy and die, so that new ones can grow. (Berger, 2010) Pruning is very important in the development of a healthy brain. If there is too much or too little pruning going on, problems can occur. When there is too little pruning, children make have intellectual disabilities that makes thinking difficult, such as autism. When there is too much pruning, it can lead to a reduction of brain activity. (Berger, 2010) Infant brains to not develop correctly if they lack certain experiences that all humans need, such as stimulation. Babies need to be played with and talked to during their first years in order to encourage movement and allow sensations. If babies are not talked to or played with, it can stunt the brain. Infants are satisfied with even the most simple objects and facial expressions.

Human brains are designed to grow and adapt with whatever object they have available and whoever provides them with every day attention. Every baby will go through a stressful experience here and there, but it is patterns of mistreatment that harm their brain, not moments. (Berger, 2010) The most important parts of the brain develop during early childhood. Between the ages of two and six, planning, thinking, social awareness, and language occur in the cortex. It is during early childhood when the prefrontal cortex starts to mature. This allows young children to begin to plan ahead and even think about the past. (Berger, 2010) The biggest increase in brain weight after the first two years is because of myelination. Myelination continues for years and it is a life-long process, but is most apparent in early childhood. It speeds the transmission of nerve impulses between neurons and becomes pivotal when multiple thoughts and actions have to take place all at once. (Boyd, 2010) By time most children turn six, they can see object and name them, catch a ball and throw it, and write and say their ABC’s in order. It is important that when children are doing these things, that the adults in their lives are patient. The only way children are going to learn how to tie their shoes, write their name, or get dressed, is if they do it on their own with a little help from a parent. If a parent is constantly yelling at a child to hurry or take over, their child will always think that they can’t do it by themselves. (Berger, 2010)

In early childhood, children have the tendency to stick to a thought for a long time instead of switching to another. This is why children at this stage have difficulty sorting objects. Once a child is told to sort something by color and do it correctly, if they are told to next sort by shape, they try to sort by color again. However, something in the brain matures between ages three and five that allows children to grow out of perseveration. (Berger, 2010) The corpus callosum grows rapidly during early childhood. This long, thick band of nerve fibers that connects the left and right sides of the brain ,make communication between the hemispheres better and allows children to coordinate both sides of the brain and the body. (Boyd, 2010) If the corpus callosum does not mature, it could result in serious disorders such as autism. It is important that children can coordinate both sides of the brain because both sides are normally involved in every skill, even though both sides do different things. (Berger, 2010) The amygdala, the hippocampus, and the hypothalamus are crucial to emotional expression and regulation during early childhood. The amygdala registers positive and negative emotion, including fear. Increased activity in the amygdala can cause young children to have nightmares or phobias. (Berger, 2010) Located next to the amygdala, the hippocampus is in control of memory.

Children are able to remember memories they had at certain locations that will follow them through adulthood. The hypothalamus responds to symbols from both of these parts of the brain. The hypothalamus produces a hormone called cortisol to activate parts of the brain and body. As all three of these parts of the brain develop, children pay close attention to their parents’ emotions. If they sense that their parent is scared or worried, they will also develop fear. (Berger, 2010) Brain maturation in young children is advanced, but like in infants, experience and parental relationships has an impact too. Brain maturation only increases more throughout middle childhood. Since the brain has no areas specific for reading like it does for talking, gestures, and expressions, humans have to learn to read on their own. This is possible because of massive interconnections between the parts of the brain that deal with sounds, vision, and comprehending. (Berger, 2010) These “massive interconnections” are not only needed for reading but for many other social skills as well. Several parts of the brain connect to enable for many activities, reading, writing, logic, and social decisions. Children require more connections than adults because they often use more parts of their brain for activities than adults do. (Boyd, 2010) The older that children get, the quicker their reaction time gets. In middle childhood, children are more efficient learners because of their more speedy reactions.

In addition to thinking quickly, children are able to pay more attention in middle childhood. As children get older, they get better at concentrating on one stimuli and ignoring others. They are more able to focus on one thing and not get distracted by others. This usually happens by the age of seven. (Berger, 2010) In middle childhood children also learn how to do math. They adopt newer, better strategies to solve math problems. Although they aren’t always perfect, they can usually find the right answer. In children during middle adulthood they may know the answer one day, but it isn’t permanently in their brain and they may not know they answer the next day. (Berger, 2010) Another way children advance in middle childhood is through memory. They are better at connecting their past knowledge to what they are doing in that moment. Children realize that some things should be remembered and they begin to strategies like repeating themselves in order to remember them. They also use strategies like visual clues such as remember how a word looks or auditory clues like remembering how a word sounds. In middle childhood children’s memory becomes more adaptive and they are able to learn from their parents, teachers, and friends. (Berger, 2010) From the time children are born until they reach adolescence they are developing rapidly in their brain and bodies.

Although most of the development of the brain during childhood is genetic, it is so important for parents to interact with their children, be patient with them, teach them new things, and set the best example they can for their children so they can become healthy adults. Brain development doesn’t stop after childhood, but continues to develop throughout adulthood. Almost all of the brain development takes place during childhood and the first several years of a person’s life are the most important to their personality and their future. 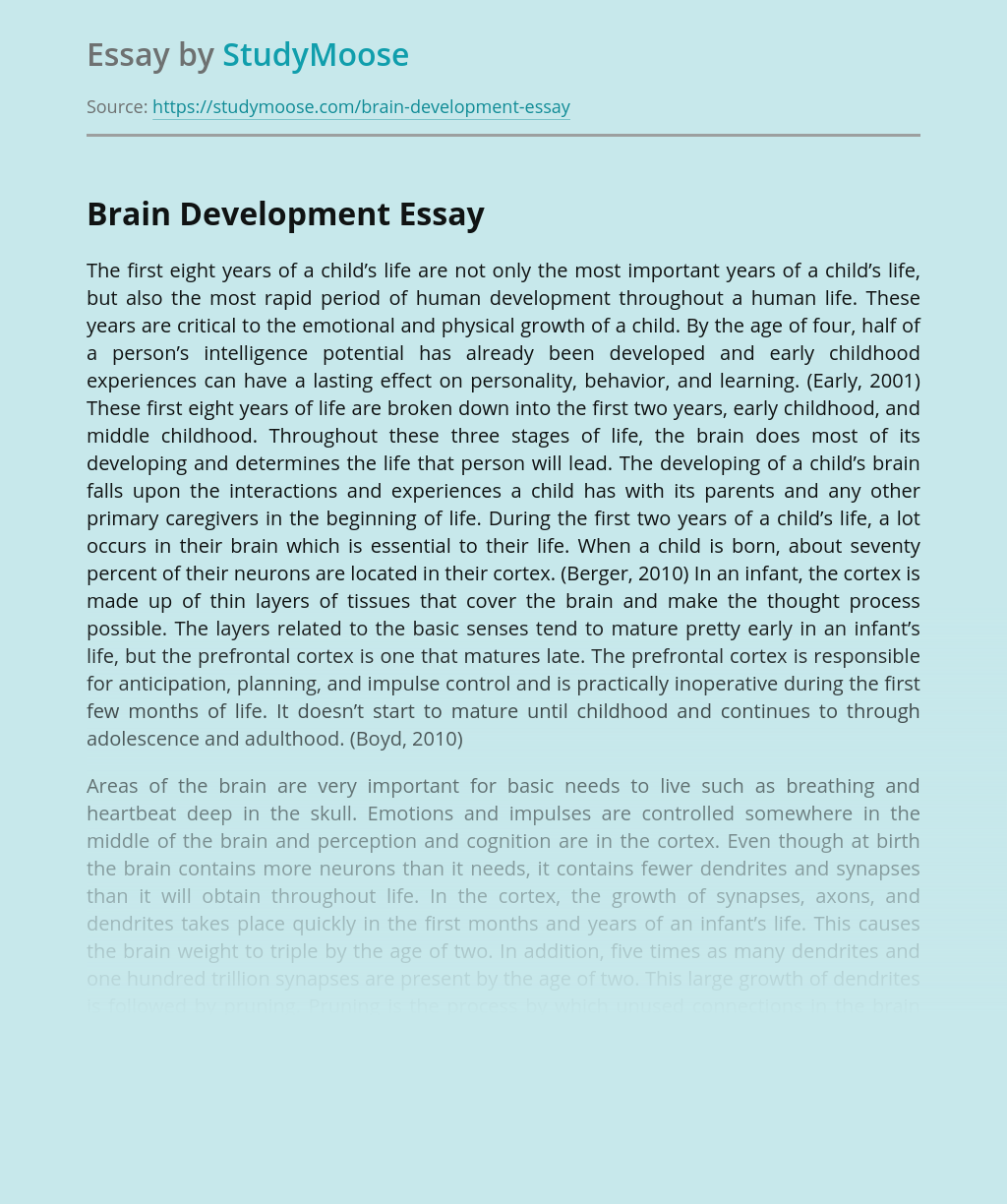 Turn in your highest-quality paper
Get a qualified writer to help you with
“ Brain Development ”
Get high-quality paper
Helping students since 2015
Stay Safe, Stay Original