?How is violence presented in Lord of the Flies?

William Golding explores the theme of violence throughout his novel ‘Lord of the Flies’. He believed that every individual has the potential to bring out their inner evil, and that every human being is flawed in their nature. Hence, he wrote a novel with an aim to employ characterisation of mankind’s essential sickness, after his time spent in war. He also aimed to challenge Ballantyne’s ‘Coral Island’. ‘Lord of the Flies’ presents the helpless and violent breakdown – along with devolution, of civilisation on the island by using authoritative symbolism, metaphorical imagery and biblical references to reinforce this loss of humanity in this corrupt regime.

Don’t waste time
Get a verified expert to help you with ?How is violence presented in Lord of the Flies?
Hire verified expert
$35.80 for a 2-page paper

In the exposition of the novel, we are familiarised with the setting of the island – which begins as a utopia for the boys, with “the shimmering water”. This has paradisiacal connotations, showing the island to be an obvious place of beauty, along with the “lagoon” and “young palm trees”, which again is an idyllic characteristic for a place of bliss.

However, this contrasts with the dark traits of the island also being depicted – which start becoming prominent and sets the theme of violence in Golding’s novel. The plane crash on the island is described as a “scar”, implying that the mark left has permanently damaged the island, which was once untouched and flawless.

The use of this intimidating and daunting word ‘scar’ shows the ruin and damage of the situation in which the plane has come from, thus portraying violent features. Furthermore, this reveals the background information to the plot – the boys are evacuees from the war who have landed on this island due to a plane crash; which connotes violence already.

Another example of violence on the island is expressed through Golding’s description of features generally associated with islands – “skull-like” and “decaying” coconuts. These adjectives have oppressive connotations. Furthermore, the “witch-like cry” symbolises evil, and this creates appositions with the previous optimistic impression of the island, which hints to the readers that this island may not really be as magical as deemed.

Another way the theme of violence is presented across the novel, is through the binary oppositions – principally the theme of civilisation versus savagery. The established division between the two groups of boys each represent a certain aspect to society. The characters (predominantly) Ralph, Piggy and Simon represent civilisation with the use of the conch to display order and control during the organised and contained meetings. On the other hand, there is Jack who leads his hunters (or his “tribe”), representing savagery. At first they work together, but disagreements shortly lead to to dehumanisation of their relationships – following progression from a “shy liking” between Jack and Ralph, to Jack trying to kill ralph towards the novel’s resolution. The fundamental peak of this opposition is present during the undeniable temptation of hunger, when Ralph and Piggy join the hunters as their desperation for food takes over.

The metaphorical imagery set by Golding of Simon’s death shows the height of this violence and how the boys let the evil inside of them win. Simon’s allegorical role or function in the novel includes biblical insinuations. “…and was covered with a coat of pearls…” these divine allusions emphasise the violence present, as they contrast with the angelic and Christ-like quality of Simon, whom the savages mercilessly murdered. Following this incident, the conch is shattered and when Piggy’s glasses are broken (along with the death of the fire that previously occurred), it foreshadows the total destruction of any possible civilisation ever returning back to the island, showing the demise but need of law, order and reason in society).

Hereafter, Ralph is left alone to face the savages. This all underlines Golding’s ideas that humans have evil and hatred deep inside of them, and could let the inner beast completely and violently take over if they be submissive to even a bit of temptation. The other binary opposition also prevailing in this novel is dictatorship versus democracy. This juxtaposition is also used to portray violence across the novel. For example, “………….” Here, we can see the development of the behaviour of the, as turning more and more violent as soon as they lose sight of the conch, and the sense of democracy is broken down or lost.

Violence is presented in the novel through the very diverse deaths of both Piggy and Simon. Prior to Simon’s murder, the boys had been chanting “Kill the beast! Cut his throat! Spill his blood!” in “complementary circles”. These are powerful phrases which Golding pervades using the rule of three, to highlight the viciousness of this violent, tribal practice. The actions of these young boys are also atrocious and horrifying. “At once, the crowd surged after it, poured down the rock, leapt on to the beast, scream, struck, bit and tore. There were no words, and no movements but the tearing of teeth and claws.” These animalistic verbs have connotations of zoomorphism; resonating humans with the likeness and behaviour of animals. This is also significant as humans are meant to be intelligent – with the capacity for decent communication through language and words.

However, here, the boys are so engulfed and consumed in their bestial actions of brutality, that they have lost touch with their ‘human’ sides, unable to differentiate between good and bad, that they have lost that capability to converse, and instead are resorting to un-civilised, barbaric means. “Teeth and claws” are widely associated with large predators, and so by using this, Golding is showing us that once you give aside to a little violence, you can turn into a complete ‘animal’. The verb “tearing” demonstrating ripping human is shocking and also portrays vehemence. This violence is further emphasized through Golding’s angelic description, post-death of the protagonist. “…was covered with a coat of pearls…” shows the purity reflected upon Simon, as well as “the line of his cheek silvered”, which has Christ-like implications. The phrase “silver shape” portrays a virtuous sheen and quality in Simon, as his “dead body moved out towards the open sea”, when he finally finds peace.

This is also contrasted with Piggy’s matter-of-fact, and scientific death. “Piggy’s arms and legs twitched, like a pig’s after it has been killed”. The lexical field used is gruesome and horrific, thus again portraying the violence, long with the use of sub-vocals, “zup”, noise, and clamour used to replace language, being used by the boys to express and connect with each other. Piggy’s death had been hinted from the very start of the novel, through small incidents of violence occurring. For example, it progressed from Roger at the beginning throwing stones at the little ones, aiming “to miss”, to him rolling the boulder that killed Piggy. Violence had also been present when Ralph “machine-gunned Piggy”. Moreover, jack’s violent actions of killing the pig at the start also foreshadows piggy’s death, as it led to him being killed in the end.

Towards the novel’s conclusion, we are brought back to reality and reminded that these ‘savages’, are in fact just a “group of painted boys”. This is another way that violence is presented in the novel; because we are shown that all these horrific actions in the novel, were in fact only performed by little, once innocent children. Indeed, the violence had been so strenuous, that is had caused dehumanisation of values and characters. For example, at the start Percival “recited” his name, whereas when help arrived, “there was no more to come. Percival Wemys Madison sought in his head for an incantation that had faded clean away”. This disintegration of speech, and the fact Percival as forgotten how to speak underlines the destruction caused by the violence. The ending has a deus-ex-machina factor to it – right at the peak of the violence, rescue had come. The officer asks the boys “what have you been doing? Having a war or something?” which is ironic because they were actually having a “war”. This could also be seen as a microcosm for the Cold war that had been occurring, during the time Golding wrote this novel.

?How is violence presented in Lord of the Flies?. (2016, Mar 23). Retrieved from http://studymoose.com/how-is-violence-presented-in-lord-of-the-flies-essay 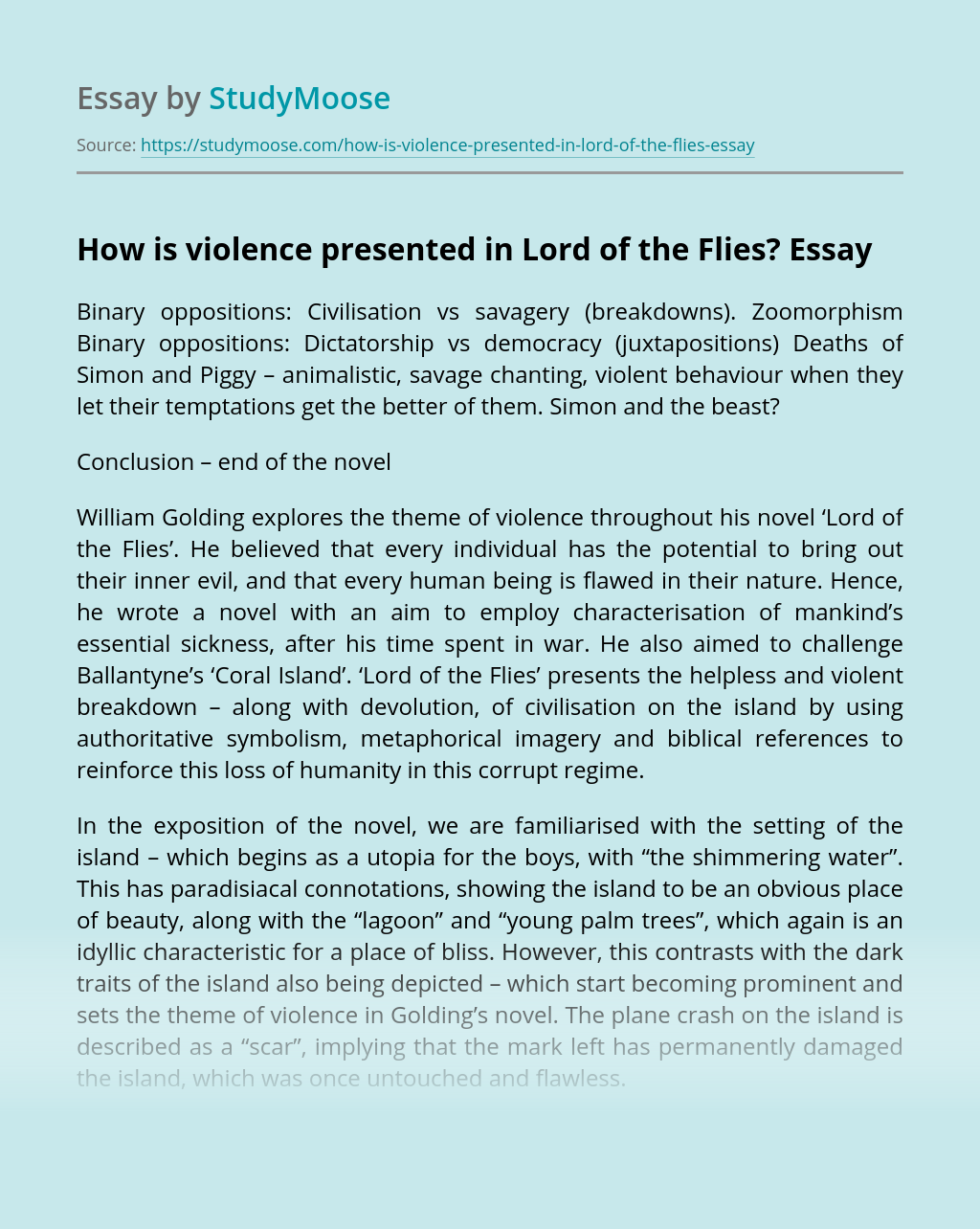 Don’t waste time
Get a verified expert to help you with ?How is violence presented in Lord of the Flies?
Hire verified expert
$35.80 for a 2-page paper
Stay Safe, Stay Original