In various ecosystems, negative changes have been seen as consequences of human activities. Specifically, these various activities of people have been observed to contribute directly and indirectly to the negative changes and implications in one of the major ecosystems, the marine ecosystem. This paper suggests that many of the human activities employed in the environment, specifically the marine ecosystem, yield multiplicative detrimental effects.

It is said that humans have a high influence over ecosystems, and the various activities they make alter the environment’s conditions (Millennium Ecosystem Assessment, 2003).

Don't use plagiarized sources. Get your custom essay on
“ How Human Activities Negatively Affect the Ecosystem? ”
Get custom paper
NEW! smart matching with writer

According to Hylland (2002), there are many different perspectives that could affirm the impact of human activities towards nature. However, in purely simplistic illustrations, human activities that involve physical disturbance, release of harmful chemicals, and other destructive forms cause serious effects such as a reduced biodiversity.

Physical disturbances such as trawling, large scale fishing, or coastal construction prevent fish and other marine species from staying in their original habitat. This means that these marine fauna are displaced from their habitat which may have been destroyed or changed beyond recovery by drastic fishing activities made by man.

Similarly, the marine ecosystem may not only be lessened because of the displaced marine organisms, but it is also possible that an eventual decrease in the population level of these organisms may happen.

This could trigger to a relatively damaging human activity wherein humans will aim for the fish nearer the coastal areas. Under many legislation proceedings, fishing near the coastal areas is prohibited because the act will strip the number of fish and other marine species into a minimal number.

Over-fishing could as well cause the decrease in the biodiversity of marine animals (Hylland, 2002). The use of chemicals in fishing could also destroy not only the marine species but also their habitat and where eventually, humans will also be affected.

This is a chain-like series of events that could lead into a negative effect, destruction even, among marine biological ecosystems. Cyanide and other dynamite fishing are often used by fishermen as an easier method of fishing that kill even the smaller fish. If these methods continue, the marine species will no longer be sustained. The chemical by products from these methods also destroy their natural ecosystem by contaminating changes that are harmful to the lives of these species.

Similarly, there are instances where pollutants and toxic materials from pesticides go as water run-off from residential and agricultural areas toward the seas and other water forms, thereby contaminating the seas and the living organisms in it with the toxic substances (Hylland, 2002). Another major implication that is currently of relevance is the aftereffect of negative human activities that characterize an indirect implication: climate change. Because of the ensuing pollution, forest denudation and other factors, climate change and global warming have been relatively causing damage. 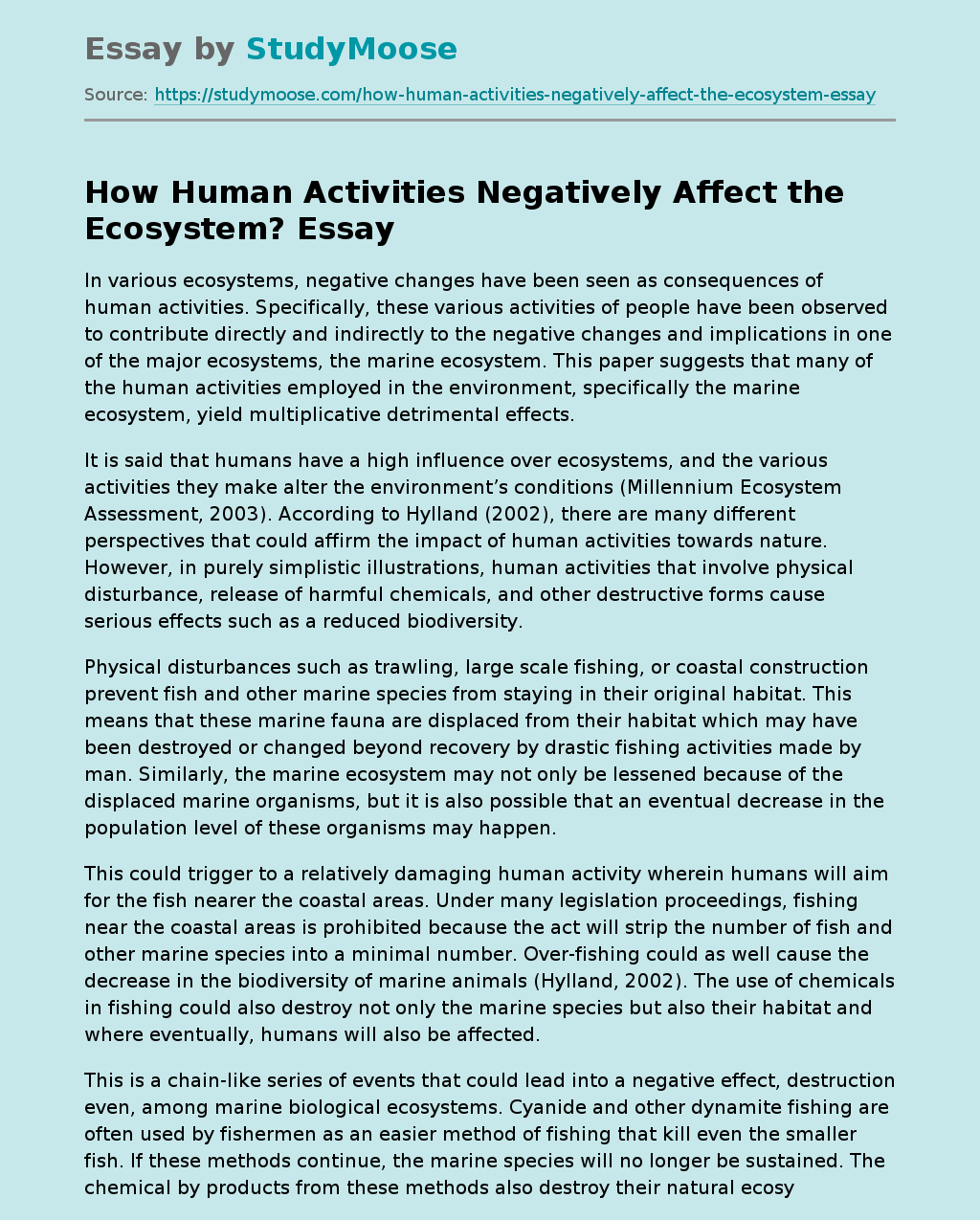