The Disadvantages of Television, Internet and Computers

Television, internet and computers have been great technological advances. We have been able to communicate beyond our dreams, through these mediums. Nowadays more and more teenagers spend twice as much time watching television, on the internet and using computers, instead of reading books and playing games outside. What exactly is a good way to spend time? Some say reading a book, others say playing a sport but many say that watching television or for example, online chatting are a great way to spend time.

Don't use plagiarized sources. Get your custom essay on
“ The Disadvantages of Television, Internet and Computers ”
Get custom paper
NEW! smart matching with writer

I disagree, because this creates an addiction, sometimes very difficult to eliminate. Before technology existed, a fun way to spend time would be painting, writing or playing sports and games, or even spending time with the family. But, things have changed…

Today, the Internet is one of the most powerful tools throughout the world. The Internet is a collection of various services and resources. Children using the Internet have become a big concern. Most parents do not realize the dangers involved when their children log onto the Internet.

Proficient in: Advantages And Disadvantages Of Computers

When children are online, they can easily be tempted into something dangerous.

When children talk to others online, they do not realize they could actually be talking to a harmful person. As a result, there have been many cases where children have been convinced to meet people they have talked with online. In fact, stories seem to come out every week, a child or teenager start talking to someone they don’t even know, and the unknown person starts convincing them that, the person is their friend.

Eventually, the person arranges for them to meet somewhere, and as foolish as this may sound, the child or teenager actually go.

This could bring severe consequences, for example: a kidnapping. In addition, children may also receive pornography online by mistake, therefore, causing concern among parents everywhere; whether surfing the Web, entering networks, or using email, children can be exposed to extremely inappropriate material. Pornographic sites tend to make sure they are the first sites to be listed in any search area, so, children come across those sites easily. Nowadays, 60% of all interpersonal relationships are through the internet. This is something that has caused serious concerns, since personal relationships through dating, conversations or casual encounters will disappear.

One of the most important forms of communication and entertainment is television. All too often, television is harmful because of the shows it broadcasts, the effect it has on people, and the way it is used in homes. Most Television broadcasters broadcast a variety of programs 24 hours a day, giving the viewers a 24 hour service, that some can’t resist. Programs that promote violence and murder, teach people the techniques of killing, raping, kidnapping, and stealing. You name it and they teach it. Censorship has been a major issue for the past few years but somehow people always find a way around it. Even cartoons, which everybody thinks are safe, aren’t! Television has been one of the successful destroyers of what we once knew as a happy family.

Children watch actors argue with their parents, leave the house and even harm their families. So what is TV really doing to our families and the people we love the most? It is making us grow apart. Families should spend more time together doing different activities that don’t include watching TV or any other movies. Television is an important form of communication but as everything else is it has its disadvantages. Another reason TV is affecting people is that more and more people are becoming obese, because instead of doing exercise and living a healthy life they sit and watch television.

Computers can also be dangerous, because you never know when you will get a devastating virus that could ruin your entire equipment and cause a high price for replacement. And for similar reasons computer games can be violent and can also give a false sense of family environment.

And these are some of many disadvantages of television, internet and computers. All of these mediums are wastes of time, money and energy. This is my opinion… How about yourself?

The Disadvantages of Television, Internet and Computers. (2020, Jun 01). Retrieved from https://studymoose.com/disadvantages-television-internet-computers-new-essay 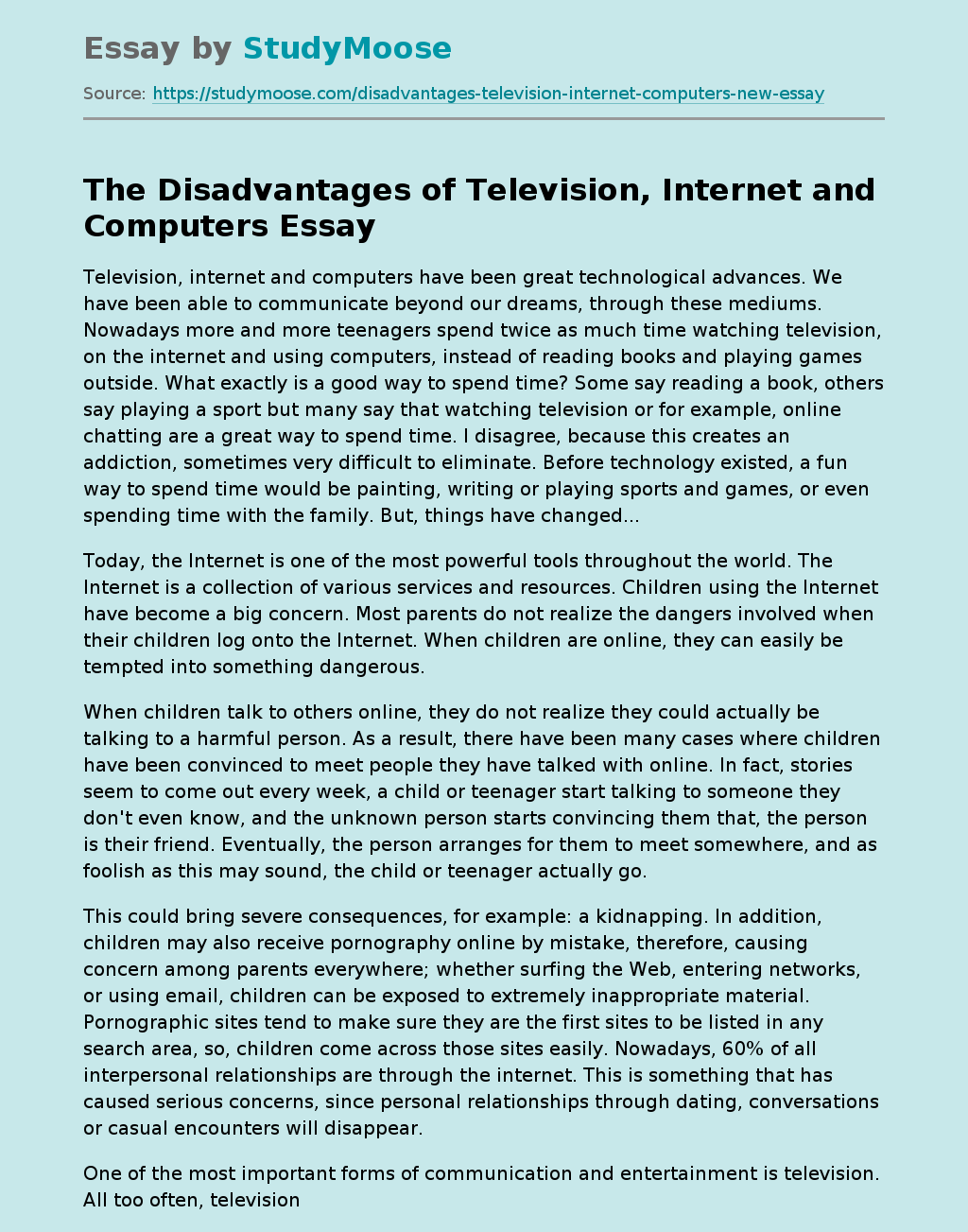