How Did the Constitution Guard Against Tyranny

Have you ever wondered what the US would be like if our government was a tyranny? Well, thanks to our founding fathers for creating a strong constitution, we don’t have to worry about that. The constitution was written in 1787 in Philadelphia. The problem was that the existing government that was under the Articles Of Confederation wasn’t very successful. Therefore, the fifty-five delegates representing twelve out of the thirteen states came together to tweak our constitution to create a strong government without allowing one person, or group of people to have too much power.

Don't use plagiarized sources.
Get Your Custom Essay on How Did the Constitution Guard Against Tyranny Just from $13,9/Page

The framers used the Constitution to protect against Tyranny in three ways federalism, separation of powers, and checks and balances. One way that the framers protected against Tyranny was through federalism. “The different governments will each control each other, at the same time will be controlled by itself. ” (Document A) By separating the two different governments ,it creates a double security to the rights of the people Commentary, and the two control each other and itself.

This guards from a tyranny because it keeps the power completely separated between central and state government but keeping the power even at the same time, so that one doesn’t inherit too much. Document A states that powers given to the central government include: regulate trade, conduct foreign relations, provide an army and navy, declare war, print and coin money, set up post offices, and make immigration laws. Powers given to the states include: set up local governments, hold elections, establish schools, pass marriage and divorce laws, and regulate in-state business.

The two different parts government hold their own different powers and responsibilities that are both limited and shared to keep it fair. This guards from tyranny because it splits up the rolls between the central and state government but still keeps them even. Federalism is one of the main ways framers used to protect against tyranny. Another way the framers used the Constitution to protect against tyranny was separation of powers. “(L)iberty requires that the three great departments of power should be separate and distinct. (Document B) For our government to be successful we much create three main levels of government where powers are distributed. This guards from tyranny because it makes sure that no branch has more power than one another because they check each other. Document B states that in the Constitution article 1 section 1, article 2 section 1 clause 1, and article 3 section are about the three separate branches in our government and what responsibilities that each one holds.

With our government having three different branches each one has its own limited powers that make a democracy possible. This guards against tyranny because no branch overpowers each other, nobody gets too much power, and the powers are evenly distributed. Separation of powers is one of the main things framers used to protect against tyranny. A third way that the framers used the Constitution protects against tyranny was checks and balances. “… The constant aim is to divide and arrange the several offices in such a manner as that they check on the other… The main goal is to make sure that each of the three branches have control over each other but still separated. This protects against tyranny because each branch has powers the control one another. In document C it states how each level of government limits and balances each other out to keep the powers even, and how our government is constitutional. Each different part of the government has three separate branches the uses the Method checks and balances to keep power even and to have control over each other.

This guards from tyranny because by keeping all of them limited with what they can do and in control of each other keeps it from one branch getting more power than another. Checks and balances is one of the main things the framers used to protect against tyranny. Federalism, Separation of powers, and checks and balances were the three ways that the framers used the constitution to protects our government against a tyranny. Paragraph 1 came from document A stating how federalism played a part in protecting against tyranny by creating double security for the people.

Paragraph 2 came from document B stating how the separation of powers played a part in protecting against tyranny by creating three branches of government with separate powers. Paragraph 3 came from document c stating how checks and balances played a part in protecting against tyranny by making sure each branch had certain powers and also controlled each other at the same time. The founding fathers took advantage of the holes in the Articles of Confederation and used their knowledge to create a stronger constitution that today still guards from tyranny affecting our government.

How Did the Constitution Guard Against Tyranny. (2016, Sep 10). Retrieved from https://studymoose.com/how-did-the-constitution-guard-against-tyranny-2-essay 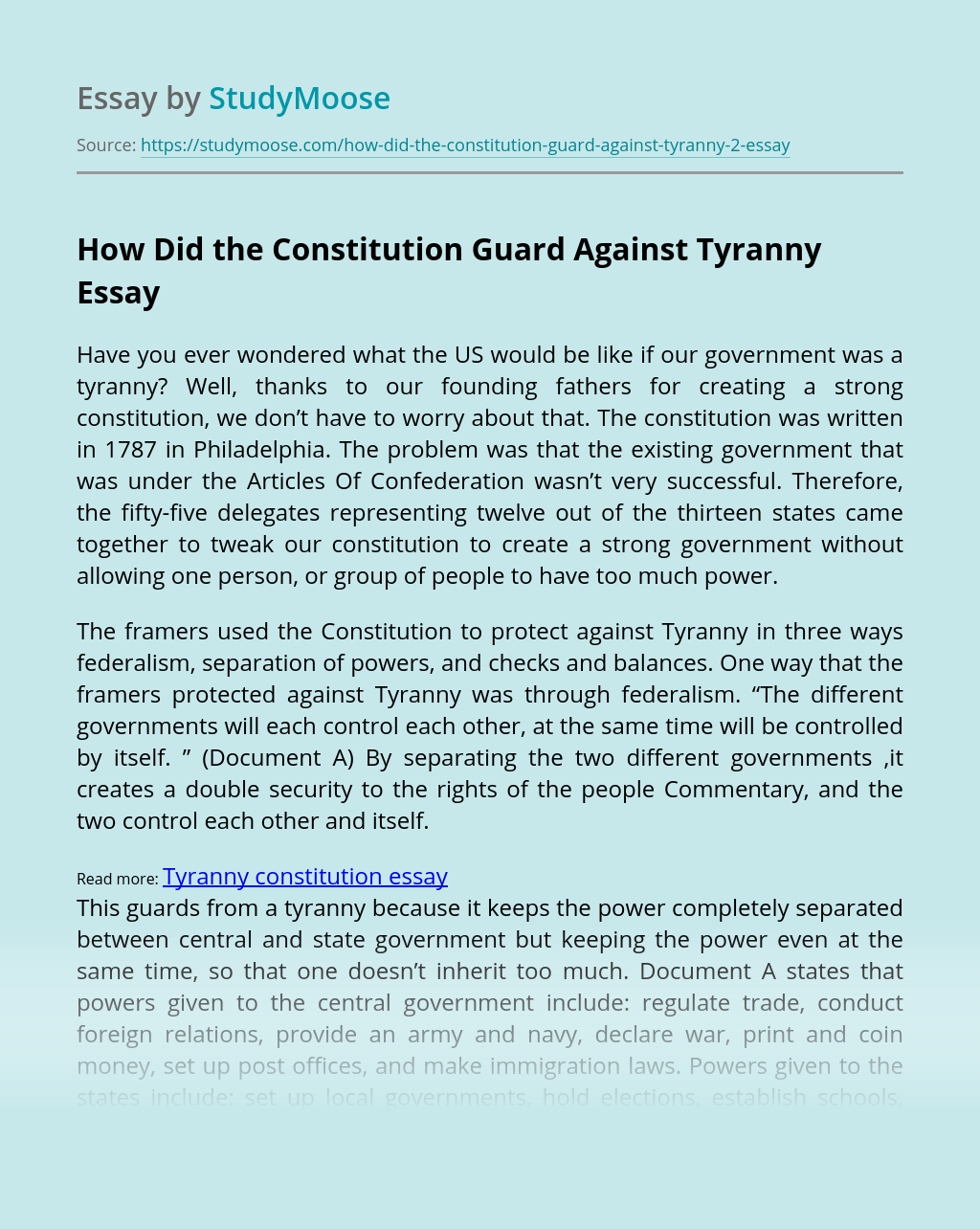 A Case of Cerebrovascular Accident

Define the Terms Ischemia and Infarction Ischemia- local decrease in blood supply Infarction- death & deterioration of tissue resulting from lack of blood supply. What is a stroke? Name the two main types of strokes and describe the mechanism(s) by which each type occurs. Cerebrovascular Accident- condition in which brain tissue is deprived of blood...

Get Essay
Skills For Computing

Introduction In the scenario given, I have been picked as an IT manager for a company which is based in the UK. My task is to create an IT system to link the head office, factory and warehouses which will need to deal with demand of from shops who sell the clothes, stock control for...

Importance of A Village Fair

A village fair is a gathering of guys, females and kids of villages at a central and hassle-free location either on the banks of the river or at the marketplace place. Generally throughout Hindu festivals reasonable are held near the Hindu temples. Fairs are held on Eid days, on the 10th day of Muharram and...