How Courage Shown in To Kill a Mockingbird by Harper Lee

To Kill a Mockingbird demonstrates courage by certain characters’ willingness to defend and sustain their own perspective. Also, true courage involves boldness and strength to resist other opinions, disregarding the pressure of others and their morals. False courage would include hypocrisy. Throughout the novel, Atticus and Mrs. Dubose are courageous in their acts, while Aunt Alexandra and the other hypocrites like Miss Gates, possess false courage.

Atticus has his own philosophies that often contradict the tacit philosophy of his society. He believes that African-Americans are no different from other intelligent human beings.

Don't use plagiarized sources. Get your custom essay on
“ How Courage Shown in To Kill a Mockingbird by Harper Lee ”
Get custom paper
NEW! smart matching with writer

He believed that in Maycomb, whites are excessively brutal to blacks, and this should stop. He defended his beliefs and strengthened them day after day. With the courage possessed, Atticus did not take the description “nigger-lover” as a discouragement, but as a support to his value system. He fought for his beliefs, not physically, but morally.

Even when the actions were not beneficial, he would act courageously. He sat in front of the jailhouse facing a mob, only to protect the rights of a Negro, Tom Robinson.

This event clearly illustrates the courageous deeds of Atticus, as he acted toward his moral stability. Another character that demonstrated courage was Mrs. Dubose. “She said she was going to leave this world beholden to nothing and nobody. (p.111)” She expressed her opinion repetitively, ignoring the opposing force. Unlike the society, she claimed that Atticus was trash, “lawing for niggers.”

Only a man with courage could stay calm and sturdy with the public atmosphere against him.

Atticus did not take the insults as denouncing him; instead, he though them to be encouragement to his courageous demonstrations. Mrs. Dubose also fought morally for her value systems, supporting the segregation of blacks and whites. She did not have a “cowardice” attitude towards the idea that one race is superior to another. Although Hitler’s example later disillusioned the racist beliefs, Dubose had expended multitudes of effort to live up to her value system. She was a morphine addict, and she forced herself to quit; she clearly specified the full meaning of her life. These actions also took courage.

Another part to courage is the ability to rise in power as the opposing morals criticize one’s actions. The white society of Maycomb had an immoral bias against blacks; whites looked down on blacks and took many privileges away from them. Atticus had enough wisdom and courage to point out that this system was wrong. By defending Tom Robinson, Atticus had fought against the society courageously and righteously. Although he lost the case, he lived up to his standard that he claimed. Mrs. Dubose also had her value system, but she could not do much fighting given her conditions. Atticus aimed to defend Tom Robinson, and Mrs. Dubose aimed to restrict and stop him. When two courageous people with strong value systems clash, they do not cancel, but would rise in conflict.

In the same novel, there also were people with false courage: people who pretend to have courage, and know that they are pretending. This is relative to hypocrisy, since they pretend to possess a value system, but do not take action. Miss Gates pretends to have a strong value system but does not take any action. “She printed DEMOCRACY in large letters (p.245),” but she lets the society be unconstitutional towards their “democratic” acts. She claims to believe “Equal rights for all, special privileges for none (p.245),” but she does nothing about the unfair treating of blacks, and the artificial superiority of the whites in Maycomb.

Miss Gates therefore does not possess true courage with strong virtues, but rather false courage. Another figure in the novel with false courage was Aunt Alexandra. She was morally instable: “Let any moral come along and she would uphold it (p.129).” She claims to uphold morals, but in reality, she just lets them pass by her, and she never takes much action. The hypocrites in the Missionary Society dissembled under a shield of false courage. They pretend to be courageous in the sense that they act so devoutly for the Christians, but only so in an illusion of achievement. They point out other’s mistakes that they commit themselves, and think themselves to be so good and pure. Overall, false courage would occur when a person pretends that others think them to be courageous.

Courage was a main theme that bound this novel together. The author conveyed a message that people with courage would succeed in real life. Atticus was depicted as a courageous man who succeeded in living up to his philosophy. Mark Twain once said, “Courage is resistance to fear, mastery of fear – not absence of fear.” This statement seems to stay consistent throughout this novel.

How Courage Shown in To Kill a Mockingbird by Harper Lee. (2021, Dec 13). Retrieved from https://studymoose.com/how-courage-shown-in-to-kill-a-mockingbird-by-harper-lee-essay 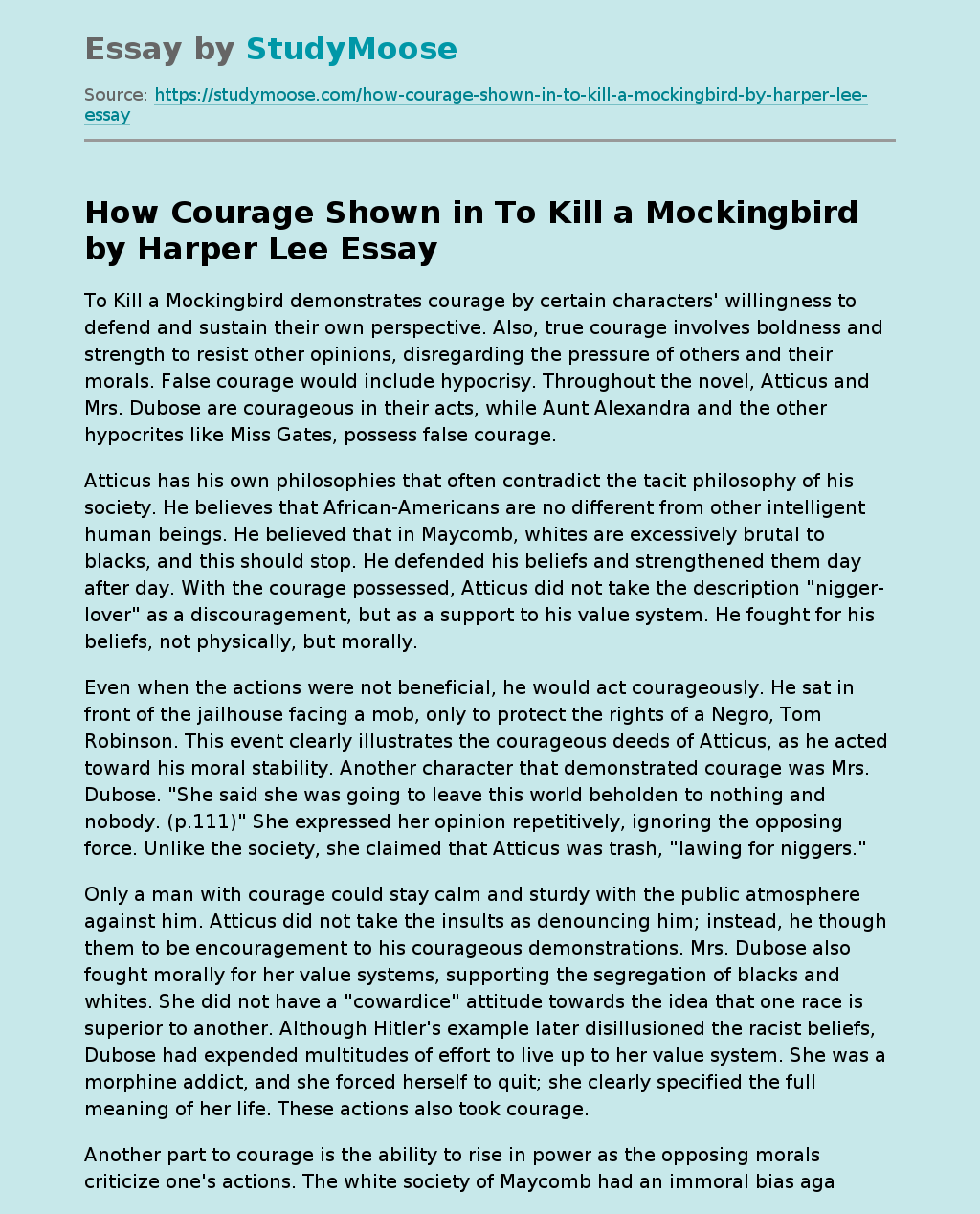