How and why does Changez change?

Mohsin Hamid’s “The Reluctant Fundamentalist” focuses on the consequences of the “9/11” attack in America on individuals and society as a whole. The main character, Changez, changes significantly as the story unfolds. At the beginning, he is depicted as a ‘lover’ of America and is determined to become wealthy, even though he is not entirely at ease. After the destruction of the World Trade Centre and the subsequent racist assaults, his attitude changes dramatically and he becomes embittered and disillusioned.

Eventually he abandons his career and returns to Lahore, becoming an anti-American activist but still appearing to hanker after the capitalist lifestyle.

Despite his skin colour, he is “confident” he will obtain “any job (he) wanted”. He is thrilled to work at Underwood Samson which represents “the achievements of the most technologically advanced civilisation our species had ever known”. This company represents as the epitome of capitalism as it profits at the expense of other businesses. Hamid also uses its name to signify that it represents the United States. At this point, Changez believes this employer “had the potential to transform [his] life [and] [make] [his] concerns about money and status things of distant past”.

He feels “empowered” working “on the forty-first and forty-second floors” of Underwood Samson, which is significant since tall towers and sky-scrapers are used by Hamid as a symbol of America’s supreme self-confidence about the success of capitalism, and its right to dominate the world. For Changez, it is a “revelation” to possess an “expense account”, as he earns “more than [his] father in a day”. The fact that he perceives himself as “James Bond, only younger, darker and possibly better paid,” illustrates how Changez is able to excel over the typical American regardless of his race.

As her name indicates, Erica is used to symbolise America to illustrate the obsession that Changez has with the country. He describes her as “so stunningly regal was she” to show that he is impressed by America’s superficial attractiveness. The fact that “her hair was piled up like a tiara” symbolises the power that America holds “firm”. The way Erica “shimmers” provides Changez with an “enormous satisfaction” as it exemplifies his fascination not only with her, but also the country itself. Hence, Hamid creates a character who is infatuated with Erica and the American capitalist system as a whole.

Despite Changez’ adoration of America, he still manages to see the faults within the country. At Princeton, he “was one of the only two Pakistanis in [his] entering class”, which shows he realises how there is subtle racism, especially since “the Americans faced much less daunting odds” than foreigners. The fact that the students “parted with money” as “meals [were] costing perhaps fifty dollars a head”, is used to underscore Changez’ shock at Americans’ profligacy and the important of wealth in this country. Changez also feels concerned at the way the students are rude to the Greek elders.

The fact that Changez recognises there were “many of whom [he] would have regarded as upstarts in [his] country”, illustrates the people living in America are automatically granted a higher status than other races regardless of wealth. Even at Underwood Samson, Changez sees the flaws in his adopted society. At the Royalton Bar, he thinks his colleagues are “marvellously diverse”, and “yet [they] were all not”, it indicates that not only Underwood Samson but also America is not multicultural. Changez is also “annoyed” at the way Jim condescendingly assumes he is poor because he is Pakistani.

He notes that Jim’s house reminds him of “The Great Gatsby”, indicating that Jim believes that wealth can make him accepted and successful in America. Changez is also “ashamed” of how the “cities were largely unplanned” which displays how disorganised an advanced and developed country is. Compared to Pakistan, where “four thousand years ago, the people of Indus River basin, had cities that were laid out on grids and boasted underground sewers, while the ancestors of those who would invade and colonize America were illiterate barbarians”.

Thus, this illustrates how Changez feels resentful at how America possesses power while Pakistan has fallen behind. Furthermore, Changez “bridled” when Erica’s father criticises Pakistan has “got some serious problems with fundamentalism”. The fact that her father uses a condescending tone “struck a negative chord with [him]”. He also notices something “broken” inside Erica, just “like a crack in a diamond” which subtly implies how not only she herself is flawed, but also America. Ultimately, even though Changez is infatuated with America, he is still capable of seeing it weaknesses.

After the “9/11” attack on The World Trade Centre, Changez’s doubts intensify. His change is shown when he “smiled” and is “remarkably pleased” as he watched the twin towers collapse, because America’s arrogance is being challenged and the country is “brought to its knees”. Changez “was not at war with America”, but a “part of [him] [desired] to see America harmed”, which shows he is slowly becoming anti-American. Leaving his trip in Manila, Changez is upset that he is the only target at the airport, and at this point he “was made to strip down to [his] boxer shorts”.

The fact that he also feels “uncomfortable in [his] own face” indicates that Changez is slowly drifting away from his America identity. Changez is inspected at the airport while his colleagues abandon him, and eventually he rides home alone. The fact he is to ride home “very much alone” illustrates that his relationship with Underwood Samson as well as America is deteriorating and he is headed in a different direction. He also hears rumours about “Pakistani cabdrivers being beaten to within an inch of their lives”, which enrages him. He then becomes increasingly shocked at the racism.

Changez is verbally abused by a man in a car park which eventually causes him to “[unlock] [his] boot” and “[retrieve] a tire iron, and [he] felt, at the moment, fully capable of wielding it with sufficient violence to shatter the bones of his skull”. Ultimately, Hamid portrays Changez becoming violent against America. When he witnesses footage of America troops attacking Afghanistan, “a fellow neighbour and friend of Pakistan”, he begins to “tremble[s] with fury”. In Pakistan, he worried about the welfare of his family, and shocked and angered by the poverty he now sees in his own country.

Changez realises that there has always been a “crack” lying in Pakistan, but he never noticed it until he returned from the American lifestyle. His beard, a symbol of Islamic fundamentalism “was, perhaps, a form of protest on [his] part” or “a symbol of [his] identity”. Thus, Hamid illustrates that Changez is gravitating away from America, towards Pakistan. His growing rejection of capitalism is further highlighted when he is “late for work” one day for the “first time”. In Chile, Changez becomes increasingly uncomfortable exploiting the Chile people.

Meeting Juan Bautista is a turning point. This man, who represents John the Baptist who recognised Jesus’ true destiny, points out that Changez is a “modern-day janissary”, who is betraying his own people. Therefore, the protagonist leaves Underwood Samson and returns to Pakistan. Ultimately, Changez creates a dramatic change in his life after the “9/11”attack. At the end, Changez is ambivalent about his attitudes to America. In Pakistan, Changez becomes a radical lecturer who advocates for a separation between Pakistan and America.

The way he encourages his students to “[participate] in demonstrations for greater independence in Pakistan’s domestic and international affairs” shows how he is attempting to create a generation which is proud of its country. As shown by the inclusion of the stranger, he is being watched by the Americans as a potential terrorist but he is ambivalent about his position. Changez downplays his role as an activist, but suggesting the American media exaggerated his protests, as his “brief interview was played for days” and now concede that his remark was “intemperate”.

He still seems to admire America and have nostalgia for his life back there as he maintains his “subscription” to the “Princeton Magazine” in the hope of seeing Erica’s “blurred image”, and tries to communicate with her. Here we see that “[his] inhabitation of [America] had not entirely ceased”. The fact that the text is structured around the conversation with a silent stranger creates suspense because it is not clear who is endangered or if there is anybody in danger as there was a time for both of them to “dirty [their] hands”.

Hamid uses this structure to show that Changez is ambivalent about America. Clearly, “The Reluctant Fundamentalist” presents a protagonist who is initially infatuated with his country despite the “cracks” he can see. However, later on he realises the flaws that the country possesses and eventually abandons it, but is still left vacillating hatred and admiration. Readers can see how difficult it is for someone in Changez’s position seemingly caught between two worlds.

How and why does Changez change?. (2016, Jul 22). Retrieved from http://studymoose.com/how-and-why-does-changez-change-essay 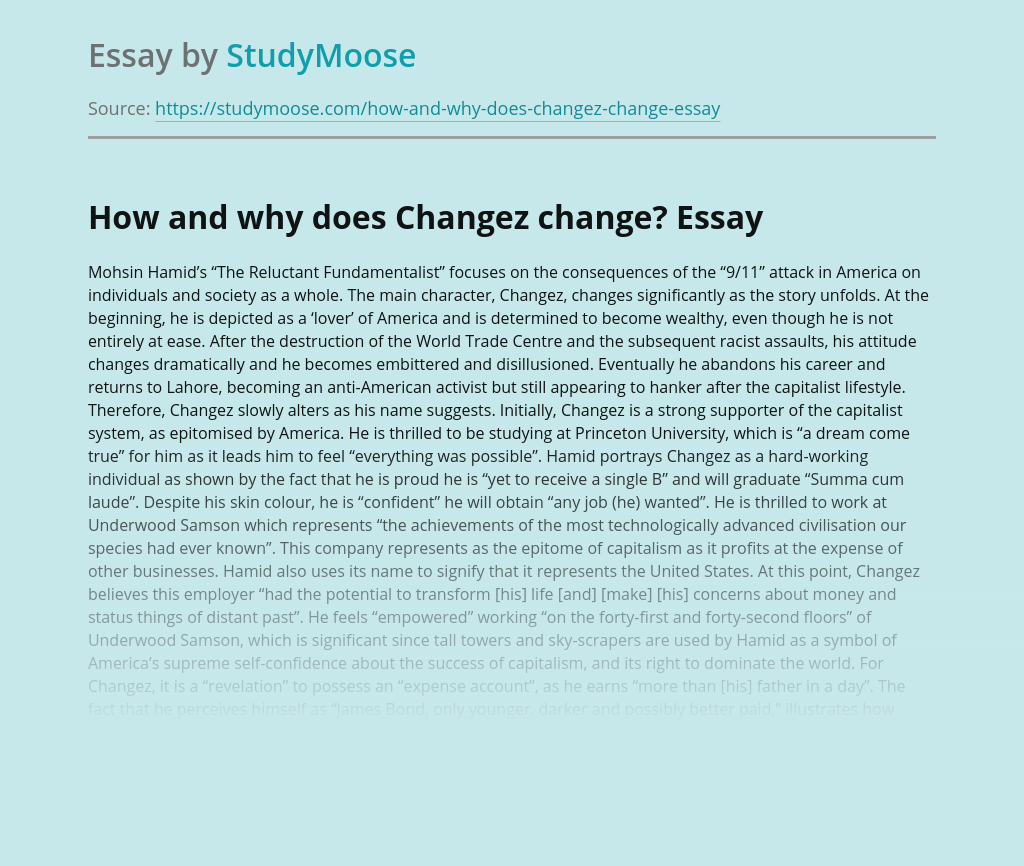 Don’t waste time
Get a verified writer to help you with How and why does Changez change?
Hire verified writer
$35.80 for a 2-page paper
Stay Safe, Stay Original