How America Became a Superpower?

To understand how the United states rose to its current state of being a superpower, we have to understand it colonization years. O’Brien (1999), in details, analyzed the years when the United States was under the rule of the Great Britain. According to O’Brien, it all started in 1780s. The Great Britain was set to reduce and subdue America by all means. The Americans wanted to deliver themselves from this. First they had to try to abolish slavery which was one of the causes of the problems facing the United States.

Don't use plagiarized sources. Get your custom essay on
“ How America Became a Superpower? ”
Get custom paper
NEW! smart matching with writer

He asserts that, the first attempt to abolish slavery was made in the year 1780 in Pennsylvania.  This split the United States of America into two groups. One group supported slavery and the other opposed it.

O’Brien (1999) further noted that, when the two groups failed to agree, the American Colonization Society was formed in 1816 by Robert Finley. The aim of the society was to reconcile the two warring groups.

This separated the country into two, the North and the South. The North supported the abolition of slavery and the South opposed it. This was the onset of the American Civil war. The Civil war weakened America so much. The first steps towards the healing of the United States were to be made. The challenge was taken up by Senator John J. Crittenden who in December 18, 1860 proposed amendments to congress that saw the abolition of slavery in Northern countries, but the South continued to uphold it. More amendments were made on the constitution of the United States that later saw complete abolition of slavery (Ford& Paul Leicester, 1898).

After the abolition of slavery, the other challenges that faced the United States was to unite its people, build its economy which was greatly affected during the civil war, build it military power and find peace with the outside world. According to O’Brien (1999), the first step towards the achievement of the above was the drawing of the Atlantic Charter in August 14, 1941. The charter was drawn between the two great nations of that time, the United States and the United Kingdom. The charter sought to establish a rapport between the two nations through which a better future of the world will be realized. The charter did not only serve the interests of the United States and the United Kingdom but also it catered for the interest of the rest of the world. The two nations addressed among others the respect of territorial boundaries among all nations of the world, the people to be given freedom to choose the government that will govern them, they committed themselves to help improve the living standards of people in the rest of the world, the destruction of tyrannical Nazi regime and the eventual establishment of a worldwide peace and finally the abolition of use of force worldwide   O’Brien (1999).

Mearsheimer J. (1990) outlines how the cold war weakened the Soviet Union. After  almost four decades ( 1945-1991), the Soviet Union finally withdrew its forces Eastern Europe. The United States followed suit and withdrew its forces from Germany. This led to the dissolution of the Warsaw Pact. This marked the end of the Cold War and so the Soviet Union. Some of its member states withdrew from the Union due to its economic principles( communism) . Mearsheimer J. (1990) further points out that,  some of the members were influenced by the American capitalist principles which allowed private entrepreneurship. From this time the United States of America become the sole world superpower.

The United States of America continued to build its financial and military power. Due  to her  immense power , the United States earned herself a lot of enemies. This made her  a target to a lot of terrorist groups in the world. After the 9/11 assault of the World Trade Center, they came up with the Anti-Terrorism, Crime and Security Bill (2001). This was drafted as a response to the 9/11 bombing. It was to protect the United States from any future attack. To date the United States maintains her position as the world superpower despite opposition from many countries especially those from the East .

How America Became a Superpower?. (2016, Sep 23). Retrieved from https://studymoose.com/how-america-became-a-superpower-essay 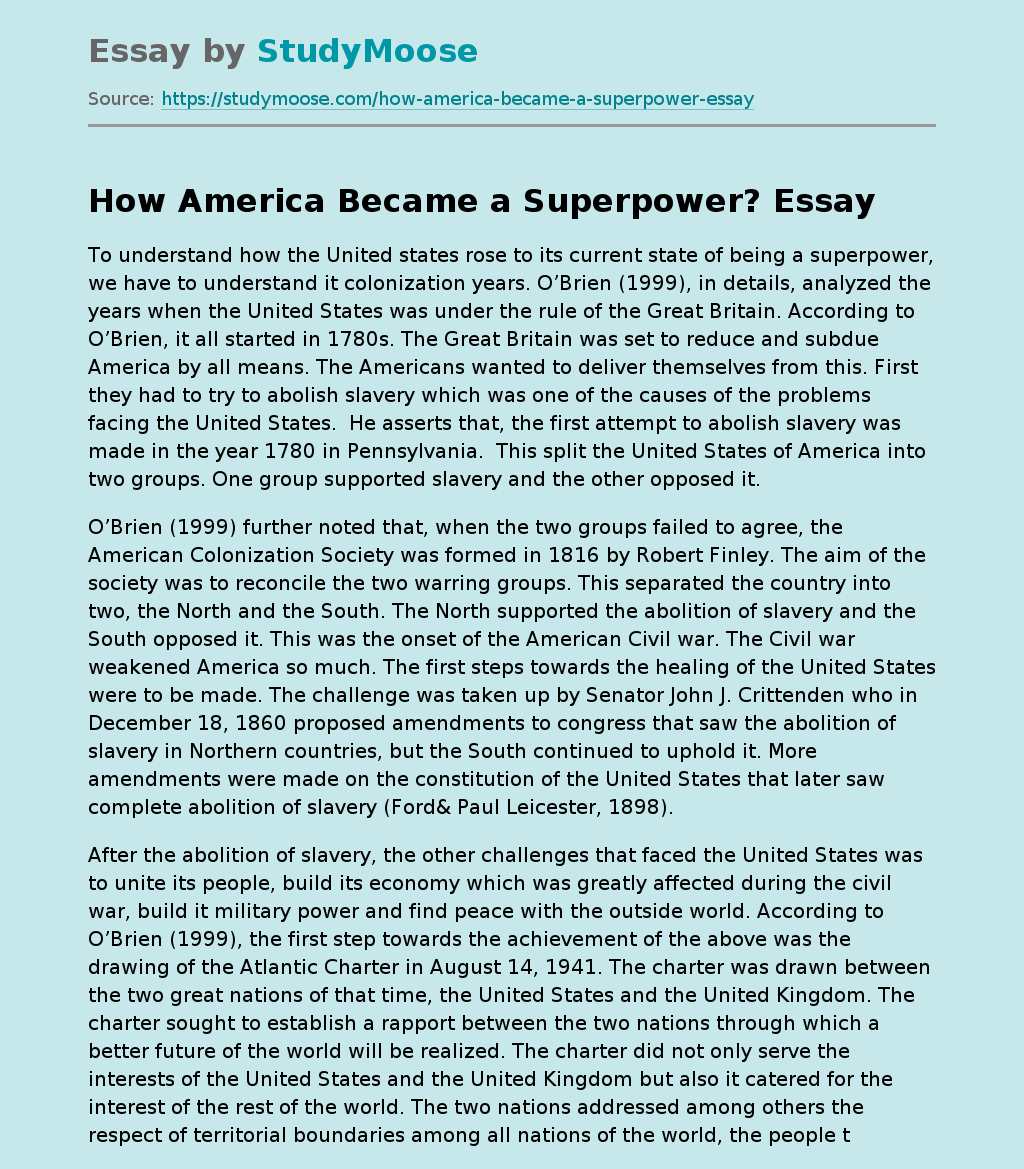