Once I finished watching the movie Hotel Rwanda, the first thought that came up to me was that the structure and the lesson of the story seems to be similar with the very well-known movie Schindeler’s List: A very average, wise man with a motive that emerged from nowhere to risk all that he has to save the lives of a couple hundred people with the same destiny, death. Hotel Rwanda is based on the genocide during the early 1990s where the Tutsis were being exterminated by the Hutu.

Don't use plagiarized sources.
Get Your Custom Essay on Hotel Rwanda Film Analysis Just from $13,9/Page

As the reporter even pointed out, the massacre might be seen from the TV sets around the world, and they would say ” ‘Oh my God, that’s terrible’, and they’ll go on eating their dinners,” he declares.. Instead of basing the movie on a larger view, it is enclosed to a small location just in the hotel, focused more on a less known, less understood horror, on one man who made a difference.

Paul Rusesabagina, manager of a five-star hotel in Kigali. A smart man who ingratiates rich guests, using bribes to obtain a smooth business in the hotel. Other than his wife and children, he is careless about the outer world. His character is revealed through the early scene as the political tension increases all over the country and the soldiers storming through his neighbors home’s at night. Paul coldly declines to help his neighbor by saying, “He isn’t family. Family is all that matters.

As a Hutu himself with a Tutsi wife (Tatiana), he becomes a hero accidently when helping the people that stayed in his house. Yet later using his hotel to keep the refugees, he realises that it was almost his duty to save lives of the Tutsi. Using all the skills he had gained from the past experiences of hotel management such as giving beers to the Hutu soldiers to buy time, flawlessly convincing an American General in order to keep the Tutsis in his hotel alive. Faced with bizzare circumstances, and becoming more soft-hearted, at the end of the film he is in grief and apologizing to the refugees: “I wish I could have done more”.

Relating this movie to the current event we have discussed about in class: the genocide perpetuated on the non-Arab by the Arabs extremists in Sudan, Darfur. We can see that the difference from the massacre in Rwanda and Darfur is that the conflict between the Tutsi and Hutus only lasted for a couple of weeks. While on the other hand, the genocide in Darfur has begun since Feburary, 2003 and is still ongoing conflict. Due to violence form the militia in Sudan (known as the Janjaweed), disease and starvation, 400,000 lives has already been taken away. Another one million are still stranded in their villages suffering from torture, rape, bombings and raids. We can know that the conditions are similar to the movie Hotel Rwanda and are able to imagine the conditions of the people in Darfur.

I have learned from watching this movie that one person can make a difference. Even if we aren’t there to witness the events we are still able to give a hand to those who aren’t able to help themselves. Even if we can’t become a hero for hundreds as Paul did, being able to save one person is making a difference. 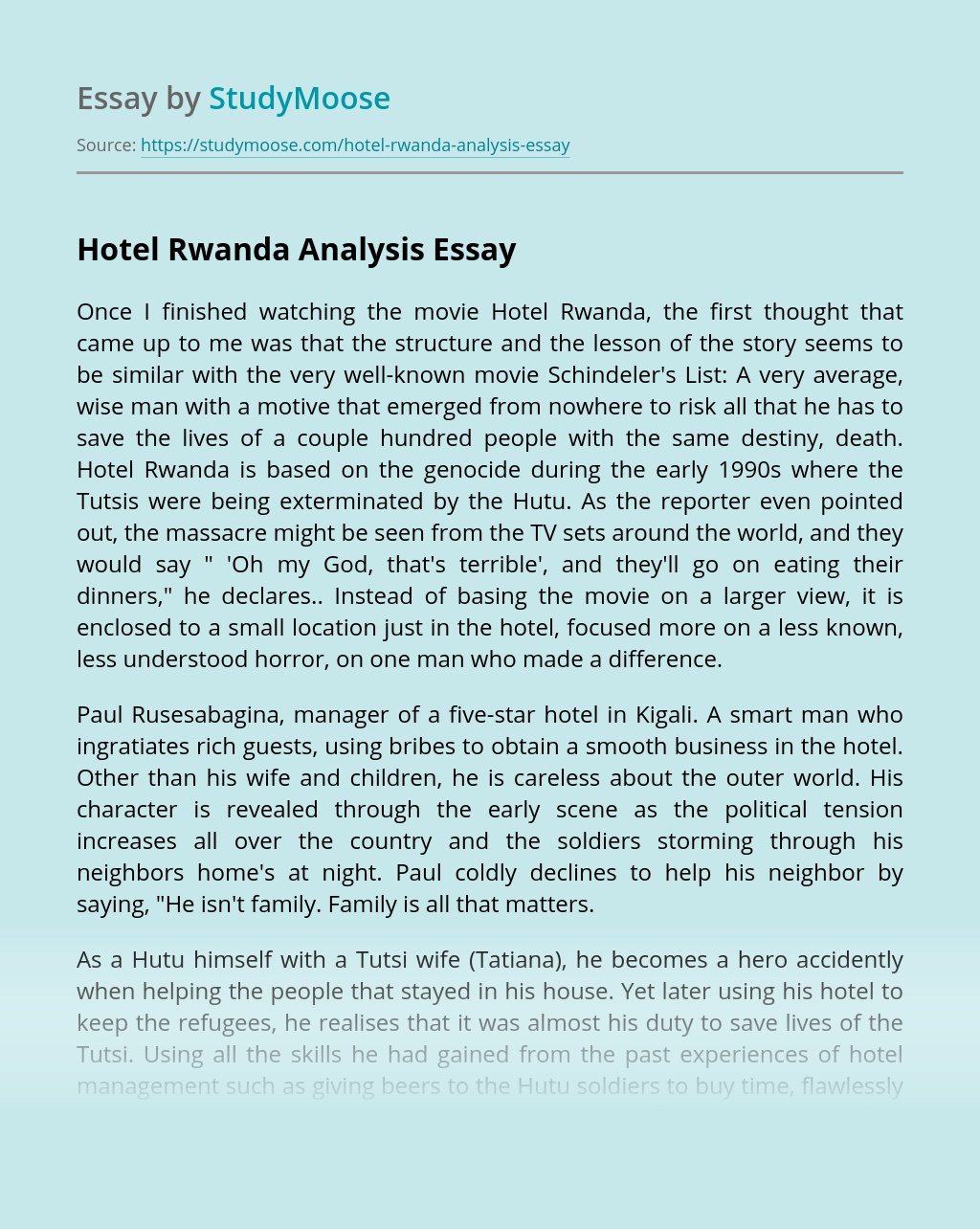 Inspired by the theme Birds of Paradise , St. Agatha Resort is your Haven to Experience a Unique Relaxing and Fun Vacation with your Friends & Family. Indulge yourself with our 11 Waves Wave Pool ,25 Meter Lap Pool & Kiddie Pool, Plus our Licensed and Skilled Lifeguards which are very happy to assist you....

Abstract The function of this paper is to check out Case Research study # 10 – Good Hotel: Doing Great, Doing Well?excerpted from Strategic Management: Planning for Domestic and Global Competitors Thirteenth Edition authored by John A. Pearce II and Richard B. Robinson published 2013 by The McGraw – Hill Companies New York City, NY....

Get Essay
Troubleshooting Information Systems at the Royal Hotel

This is a case of Blake, a young, inexperienced professional, taking on an internship with a consulting company, who assigns him to manage the Royal Hotel in New York City, a luxury hotel which catered to businesses and had a large number of repeat guests. This case emphasizes the difficulties Blake faces in helping the...

Competition among hotel and hospitality business has increased enormously as customers are getting more educated and fashionable. They’ve been demanding more luxurious services and products which urge organisations to focus on better marketing and strategic planning. Hotels and firms now believe that personal and strong relationships with potential customers is key to competitive advantage in...

Hotel industries are faced with a unique challenge in providing a constant level of service throughout many diverse countries. The time companies spend in creating a solid business plan will help them anticipate the tough spots, modify their approach and climb to the peak of success in the international marketplace (Brown & Gutterman, 2009). One...