Hotel Rwanda, directed by Terry George, is a 2004 film made depicting the Rwandan genocides. The historical context of the film is in 1994 in Rwanda, when the extremist Interahamwe militias were gathering forces to kill Tutsi tribe’s people. They succeeded for the most part, killing more than 800,000 innocent people within a hundred days. The film is shown entirely from the point of view of Paul Rusesabagina, who hosted over 1200 Rwandan refugees in his Hotel Mille Collines.

Don't use plagiarized sources.
Get Your Custom Essay on Hotel Rwanda and United 93 Analysis of Film Techniques Just from $13,9/Page

The camera only leaves Paul’s situation very rarely. The effect that this has on the veracity of the film is that it shows that this story is only his story. It recreates all the emotions of unpredictability, suspense and unsureness of what’s going to happen next. For example, in one of the scenes after Paul and his family enjoy a safe night together, the next morning he wakes up with a gun to his head. However, following Paul’s situation is used more than just for dramatic value.

The audience is drawn in to the film, as if they are right there with Paul, and this creates a very “real” experience.

United 93 uses second-skin camera placement to achieve effectively the same result. For example, during the hijacking, you would have all noticed the jerky motion of the camera and the “imperfect”, out-of-focus shots. They illustrate the confusion in the atmosphere. Again the audience feels as if they are the person watching through the lens of the camera and that they are actually involved in the situation, thus recreating reality for the viewers.

In Hotel Rwanda, footage shot of the Interahamwe beating their victims is shown. It is footage that a news reporter catches on tape in the film, but is a replica of that which another man found in reality. Additionally, Paul says that after people see the footage they will intervene. The reporter replies to him that “People will watch the footage and say, ‘Oh my god that’s horrible,’ and then they’ll go back to eating their dinners.” This quote sums up the harsh and ugly reality of the Rwandan people’s situation – that it was seen as insignificant and trivial.

Similarly United 93 uses a lot of broadcasted material in the film. For example, the coverage of the trade centres being attacked enhances the genuine nature of the film and allows the audience to remember the news coverage of the day as well.

In some of the scenes in Hotel Rwanda, real Rwandan soldiers are used. Their experience brings an authenticity to the film. However, in United 93, the professionals re enact their role on the day of the attacks. For example, after the second attack, in the military, the woman had to continue giving coordinates despite the emotional turmoil and shock that she was feeling. Using real people deters from the drama of the film and brings it back to the real world where they must continue their duties in spite of whatever may happen.

During almost all of Hotel Rwanda, there is the diegetic sound of gunfire in the background. Sometimes, gunfire disturbs even the most beautiful and peaceful of scenes. For example, when Paul and his wife are on the roof of the hotel enjoying a talk, they can hear and see the gunfire as they look out into the city. These kinds of intrusions constantly remind the audience of the graveness of the situation, and engage them in the atmosphere, creating a constant fear and paranoia of what will happen next.

United 93 sometimes has talking in the background and never focuses on one person’s speech either. Especially in the scenes with Ben Sliney, it was sometimes difficult to tell who was talking. The people working in the background even had voices to answer to. That’s exactly what it would be like if we were there – there would be people talking over people and constant confusion. This texture of sound again adds to how genuine the film is perceived to be.

Terry George and Paul Greengrass employ similar and different techniques to achieve verisimilitude in their films. Greengrass kept his movie as true to the events as possible. Terry George added in a few extra bits to add to its entertainment value, yet managed to capture the scope of the genocides very well, tell the story of Paul Rusesabagina in a credible manner, and maintain historical veracity. 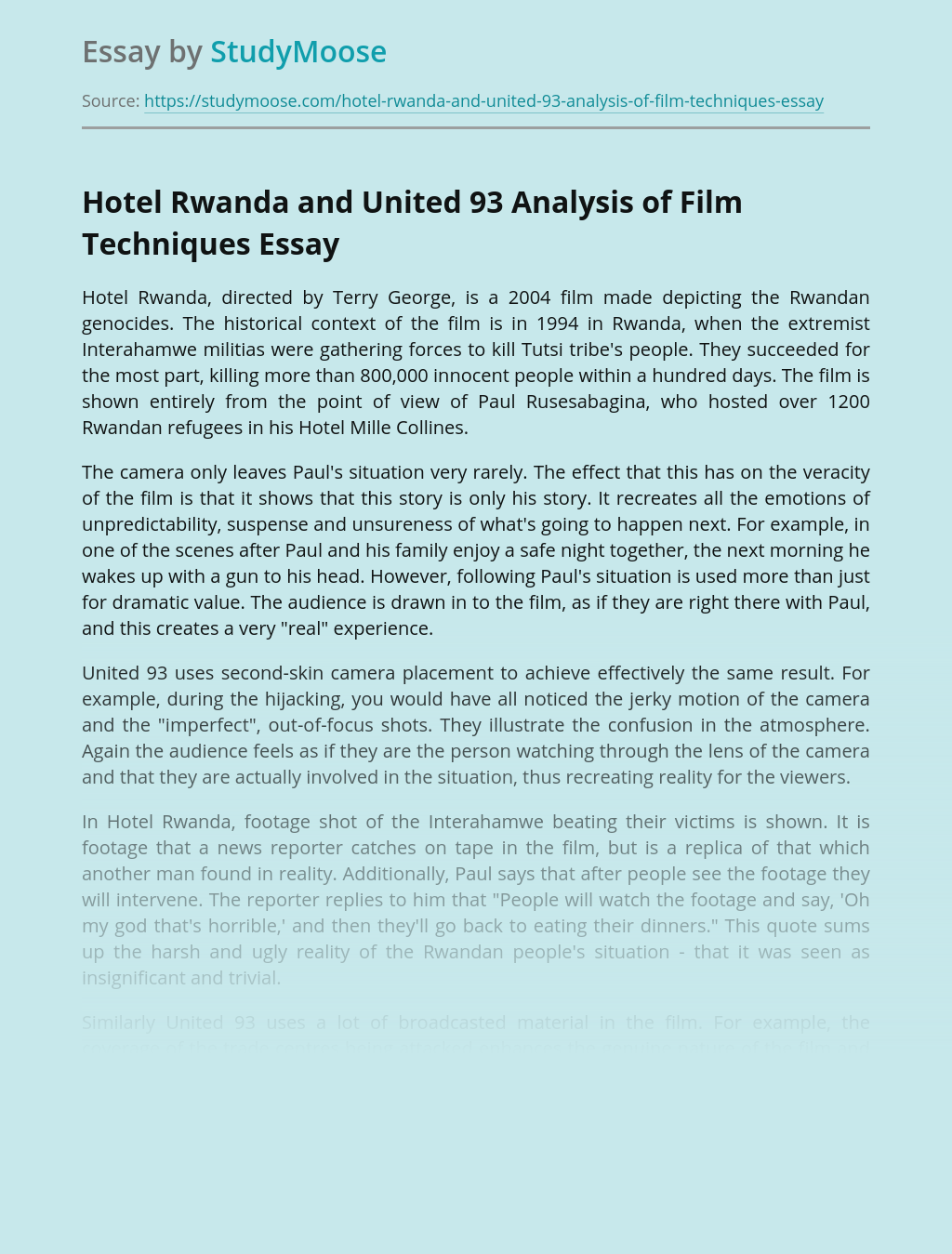 Rate this post John: Run Lola Run directed by Tom Tykwer, is an intense, fast paced action film with implications about fate, love, chance, time, choice, and consequence. Not a second in this movie is boring, as it is as high paced as the title implies, whilst being both physically and mentally straining. At the...

The Experience Of Belonging

Rate this post The experience of belonging is a deep human instinct that is forged through steady connections to place, people and eventually a world of thoughts that keep our existence stable. The failure to maintain these connections can lead to the eruption of alienation, isolation and tragedy. These intensely moving human experiences are investigated...

Rate this post The essay focus discussion on a movie called “3 idiots”. The essay provides a brief background of the chosen film. Next, it provides a description of the story and introduces the main characters in the movie such as the features on their experience and personalities. Moreover, it will illustrate discussion on main...

Rate this post The film Madagascar 2: Escape to Africa is an excellent film filled with beautiful animation and great humor. The theme of the movies is more on friendship and how the characters manage to deal with one another despite the troubles along their way and the differences of their personalities. The film is...

Rate this post My quote is “Had my brother really seen me somehow, or was he merely a little boy telling beautiful lies? ” on page 95. Susie had said this while she was observing her brother from heaven. This quote has significance because I believe that Susie wants to be remembered, because as she...