Don't use plagiarized sources. Get your custom essay on
“ History of Baking Soda ”
Get custom paper
NEW! smart matching with writer

It is classified as an acid salt, formed by combining an acid (carbonic) nd a base (sodium hydroxide), and it reacts with other chemicals as a mild alkali. At temperatures above 300 degrees Fahrenheit (149 degrees Celsius), baking soda decomposes into sodium carbonate (a more stable substance), water, and carbon dioxide. Sodium bicarbonate was discovered by two workers at a college of medicine in Berlin in the year 1800. At the time there was a lot of interest in the properties and behaviour of what was called ‘fixed air’ (carbon dioxide).

This strange material generated the bubbles in fermenting beer mash, could be made by adding acid to oda (sodium carbonate) or pearl ash (potassium carbonate), and was somehow made in the lungs of animals from the component in ordinary air, oxygen. Imported from England, baking soda was first used in America during colonial times, but it was not produced in the United States until 1839. In 1846, Austin Church, a Connecticut physician, and John Dwight, a farmer from Massachusetts, established a factory in New York to manufacture baking soda.

Dr. Church’s son, John, owned a mill called the Vulcan Spice Mills. Vulcan, the Roman god of forge and fire, was represented by an arm and hammer, and the new baking soda company adopted the rm and hammer logo as its own. Today, the Arm & Hammer brand of baking soda is among the most widely recognized brand names. The native chemical and physical properties of baking soda account for its wide range of applications, including cleaning, deodorizing, and buffering.

Baking soda neutralizes odors chemically, rather than masking or absorbing them. Consequently, it is used in bath salts and deodorant body powders. Its ability to tabletize makes it a good effervescent ingredient in antacids and denture cleaning products. Sodium bicarbonate is also found in some anti-plaque mouthwash products and toothpaste. When baking soda is used as a cleaner in paste form or dry on a damp sponge, its crystalline structure provides a gentle abrasion that helps to remove dirt without scratching sensitive surfaces.

Its mild alkalinity works to turn up fatty acids contained in dirt and grease into a form of soap that can be dissolved in water and rinsed easily. Baking soda is also used as a leavening agent in making baked goods such as bread or pancakes. When combined with an acidic agent (such as lemon Juice), carbon dioxide gas is released and is absorbed by the product’s cells. As the gas In addition to its many home uses, baking soda also has many industrial applications. For instance, baking soda releases carbon dioxide when heated.

Since carbon dioxide is heavier than air, it can smother flames by keeping oxygen out, making sodium bicarbonate a useful agent in fire extinguishers. Other applications include air pollution control (because it absorbs sulfur dioxide and other acid gas emissions), abrasive blastings for removal of surface coatings, chemical manufacturing, leather tanning, oil well drilling fluids (because it precipitates calcium nd acts as a lubricant), rubber and plastic manufactu 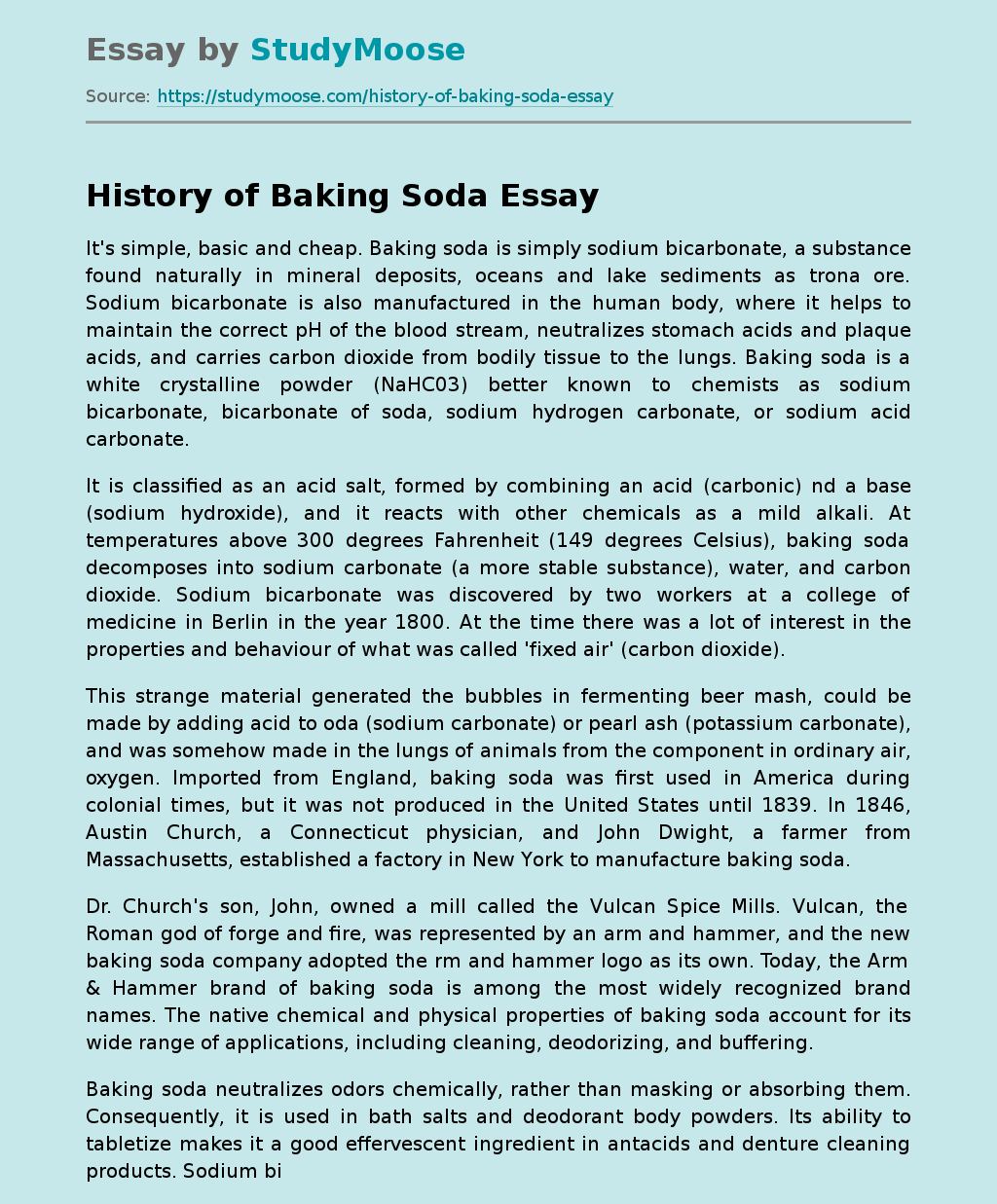