A year after the first atomic bomb was dropped on a city, John Hersey’s Hiroshima was published, detailing the horrors six ordinary Japanese citizens witnessed on the day and the days after Hiroshima’s bombing. American at the time had no remorse of the dropping of the atomic bomb, the majority approving the bombing due to the fact i helped bring an end to the war with Japan during World War II. Hersey wrote this book in an attempt to bring a negative view on the atomic bomb by showing the destruction of six innocent lives that were affected during that tragic situation.

Don't use plagiarized sources. Get your custom essay on
“ Hiroshima by John Hersey Analysis ”
Get custom paper
NEW! smart matching with writer

With the use of imagery to establish pathos and a journalistic tone, Hersey creates a powerful documentation that leads one to rethink their view on Hiroshima.

To begin with, Hersey uses imagery and vivid language to establish pathos and show the suffering of the people of Hiroshima as well as the destruction and ruin of the city.

No detail is spared from the reader, no matter how disturbing or horrifying, so the audience’s emotions and sympathy is evoked. For example, the author describes a scene from where people who were fleeing the destroyed city. “The eyebrows of some were burned off and skin hung from their faces and hands. Others, because of the pain, held their arms up as if carrying something in both hands.

Some were vomiting as they walked. Many were naked or in shred of clothing. On some undressed bodies,the burns had made patterns of undershirt straps and suspenders and, on the skin of some women, the shapes of flowers they had on their kimonos” (Hersey 29).

In this passage, the audience is presented head on with the terrible aftermath of the bombing. While the graphic description may seem to evoke disgust at first, the descriptions make the people seem pitiful and in need of help. The audience is moved to sympathy after realizing how horrible the aftermath is for the people of Hiroshima. Another example of the the author using descriptive language is when he narrates Father Kleinsorge’s walk into the city.

“By now, he was accustomed to the terrible scene through which he walked on his way into the city; the large rice field . . . streaked with brown; the houses on the outskirts of the city, standing but decrepit, with broken windows and disheveled tiles; then quite suddenly, the beginnings of the four square miles of reddish-brown scar, where nearly everything had been buffeted down and burned; range on range of collapsed city blocks, with here and there a crude sign erected on a pile of ashes and tiles, naked trees and canted telephone poles . . . in the streets a macabre traffic – hundreds of crumpled bikes, shells of streetcars and automobiles, all halted in mid-motion” (Hersey 67). Hersey showcases the devastation of a city left by the bombing. The description of the destroyed city impacts the reader as they realize just how much has been lost. The audience’s sympathy and pity is evoked because the destruction of the city is massive and reminds them just how much Hiroshima has lost.

In addition to imagery, Hersey also uses a journalistic tone when describing the lives of ordinary people that were affected, mostly maintaining an objective tone throughout the text. The author mainly stick to the facts and records the situation instead of reacting to it. Hersey’s own opinions are excluded from the text, providing a work mostly free of bias for the reader to judge. As a result, the narrative of the six of survivors are able to be connected to in a more direct way without any subjectivity on the author’s part to influence the reader’s opinions.

For example, when recording a moment in which Father Kelinsorge tries to help a cold girl, Hersey writes “She began to shiver heavily, and again said it was cold. Father Kleinsorge borrowed a blanket from someone nearby and wrapped her up, but she shook more and more, and said again, ‘I am so cold’, and then she suddenly stopped shivering and was dead” (Hersey 45). By not going into his or Father Kleinsorge’s feelings about this shocking event, the author moves onto the next situation. The audience is left to consider the death for themselves and the the contrast between the flat tone and the horrible thing that just happened displays the situation in a more heart wrenching light. Another example in which Hersey employs a journalistic tone is when he describes some of the aftereffects of the bombing.

“He saw here were about twenty men, and they were all exactly in the same nightmarish state: their faces were wholly burned, their eye sockets were hollow, the fluid from their melted eyes had run down their cheeks” (Hersey 51). Hersey writes about eyeballs melting but still doesn’t display any horror or disgust. Due to the passage being devoid of any of the author’s own feelings, the reader is able to take in the passage and process the horror of the situation directly, which in turn causes them to be even more sympathetic towards Hiroshima’s plight.

In conclusion, with the use of imagery and an objective tone, John Hersey attempts to persuade his audience to adopt a negative view on the atomic bomb by evoking sympathy within the audience after reading about Hiroshima’s plight. By using vivid details as well as presenting the narratives with a journalistic tone, Hersey presents the stories of the six survivors in a more direct fashion and displays how tragic the situation was. After reading Hiroshima, the audience is definitely left to reconsider their view on the dropping of first nuclear bomb on the city of Hiroshima.

Hiroshima by John Hersey Analysis. (2021, May 19). Retrieved from http://studymoose.com/hiroshima-by-john-hersey-analysis-essay 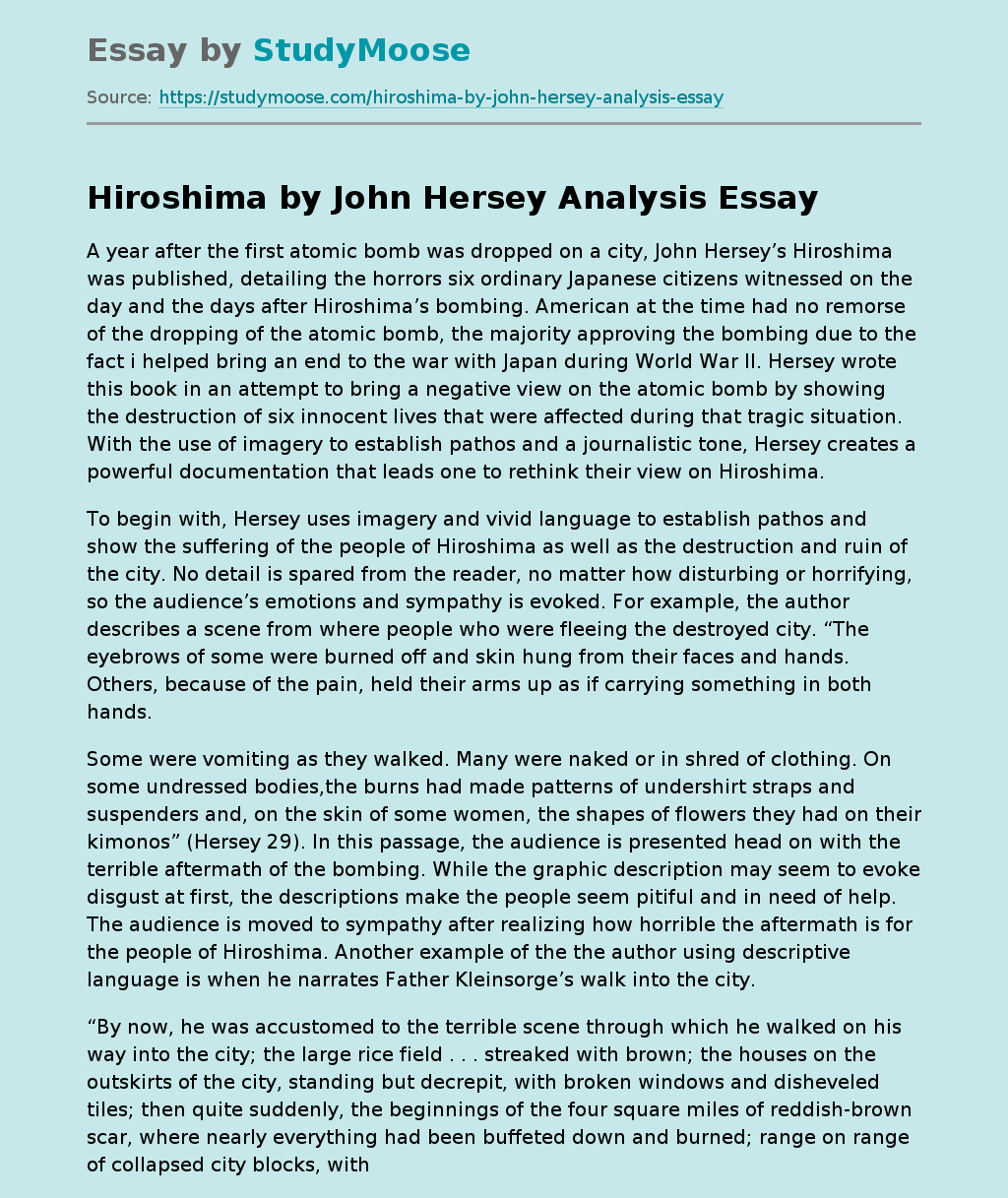