Analysis of John Keats' "On the Sonnet"

In John Keats’ “On the Sonnet,” he urges fellow poets to not let their poetic genius, their “Muse” die, because it is confined to the parameters of then-current Petrarchan and Shakespearean sonnet forms. While he follows neither form, (thus requiring further analysis to determine the logic of his poem), his use of symbolism makes his message more than clear.

He starts the poem with an allusion to Andromeda, “who, according to Greek myth, was chained to a rock so that she would be devoured by a sea monster” (Norton 799).

He uses this image to represent the fate of poetry, if it follows the unsatisfactory form of either Petrarchan or Shakespearean sonnets. This image is portrayed in the first three lines, “If by dull rhymes our English must be chained, /And like Andromeda, the sonnet sweet /Fettered, in spite of pain and loveliness,” which can be translated as “If our poetry must be confined by the current sonnet forms, and face the fate of Andromeda, despite our careful attention…[then…].

The second clause of the thought introduced in lines one through three, the implied “then,” is found in lines four through nine. Keats writes, “Let us find, if we must be constrained, /Sandals more interwoven and complete /To fit the naked foot of Poesy: /Let us inspect the lyre, and weigh the stress /Of every chord, and see what may be gained /By ear industrious, and attention meet.” According to the footnote provided in Norton, Poesy refers to a need voiced in a letter, in which Keats wrote out this poem and then discussed his “impatience with the traditional Petrarchan and Shakespearean sonnet forms: ‘I have been endeavoring to discover a better sonnet stanza than we have.

The word “lyre” can mean “harp,” but can also be a symbol for “lyric poetry,” and “chord” can mean “a string of a musical instrument, such as a harp,” but can also refer to poetry, according to the Oxford English Dictionary. With this in mind, lines four through nine can be interpreted to mean, “[if we must be chained like this], then let’s find intricately woven sandals, (symbolic of new, undiscovered sonnet forms; Keats’ “need”), to fulfill my need: let’s inspect the harp (symbolic of lyric poetry), and listen to every chord (continuing the metaphor of the harp, chords are symbolic of lines within lyric poetry), and let’s see what we can accomplish through careful listening and attention.”

Finally, in the last five lines of the sonnet, Keats directly addresses his fellow poets as “misers,” which has a double meaning. According to the Oxford English Dictionary, “misers” means “poets,” but it also means “miserable people.” This intentional word pun expresses Keats’ view that poets are currently miserable, because of the inadequacy of the current sonnet forms. In lines ten through fourteen, he writes, “Misers of sound and syllable, no less /Than Midas of his coinage, let us be /Jealous of dead leaves in the bay-wreath crown; /So, if we may not let the Muse be free, /She will be bound with garlands of her own.” Midas was a king who had the power to turn everything that he touched into gold. According to Norton, “jealous” meant “suspiciously watchful.”

Also, in reference to “the bay-wreath crown,” according to the sixth footnote, “The bay tree was sacred to Apollo, god of poetry, and bay wreaths came to symbolize true poetic achievement. The withering of the bay tree is sometimes considered an omen of death.” Keats continued the thought, implying that when the leaves of the bay-wreath crown, which represents “true poetic achievement,” begin to die, they are a warning of death to that very piece of poetry. Finally “Muse” refers to a poet’s inspiration, which may be killed once it is “bound” by the dying leaves (garland) of the bay-wreath crown,” which is accomplished by not using one’s Muse to its fullest creative potential. These lines can thus be translated as “Fellow miserable/ frustrated poets, let’s be ‘suspiciously watchful’ of omens of death to our poetry; if we do not let our inspiration run free, it will die too.”

John Keats, obviously disillusioned by the available forms through which to write poetry, expresses his dissatisfaction in his sonnet, “On the Sonnet.” Because he uses an ambiguous, unidentifiable sonnet form, instead of the Shakespearean or the Petrarchan sonnet forms, the integrity of his argument is not undermined. In this way, not only does he express his hatred for the current sonnet forms, but refuses to use them as he communicates this frustration in his own sonnet.

Analysis of John Keats' "On the Sonnet". (2016, Jul 21). Retrieved from http://studymoose.com/analysis-of-john-keats-on-the-sonnet-essay 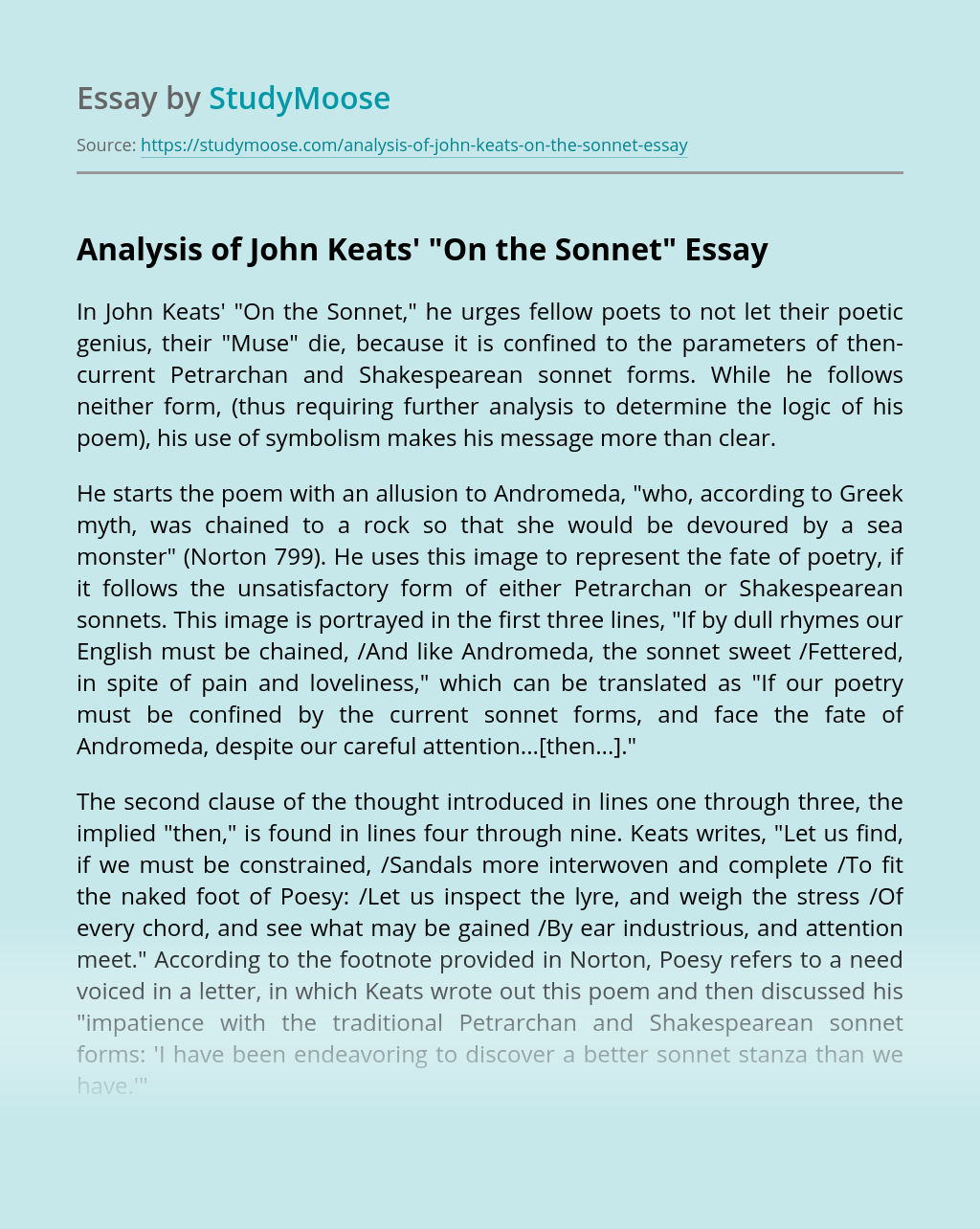 Don’t waste time
Get a verified writer to help you with Analysis of John Keats’ “On the Sonnet”
Hire verified writer
$35.80 for a 2-page paper
Stay Safe, Stay Original