“Bright star, would I were stedfast as thou art” is a sonnet by John Keats. Although this poem has the structure of a Shakespearean sonnet, it is also thematically divided into an octave followed by a sestet, like an Italian sonnet. In the first octave, imagery and figurative language are used to depict the persona’s desire to be as eternal and steadfast as the star without being isolated and distant from the world. In the following sestet, the isolation yet permanence of nature is contrasted with the intimacy between the persona and his sleeping lover.

Don't use plagiarized sources. Get your custom essay on
“ Commentary on Sonnet “Bright Star” by John Keats ”
Get custom paper
NEW! smart matching with writer

Through the structure of the Italian sonnet, the steady rhythm of the Shakespearean sonnet and myriad literary techniques, Keats explores the internal conflict of the persona as he wishes to have the best of both worlds: the steadfastness of nature and the warmth and intimacy of being human.

In the first octave, figurative language is used to depict the persona’s admiration of the star’s steadfastness and illustrate the cold, isolated quality of the star and all of nature.

This steadfastness is emphasized through the use of the iambic pentameter and the ABAB rhyme scheme, which gives the poem a slow, steady rhythm, just like the steadiness of the star. The persona’s admiration of this steadfastness is shown through the first line, which is an example of an apostrophe as the persona addresses the star; this technique also initiates a contemplative mood through the use of the subjunctive “would”. The personification of the star “gazing” and “watching, with eternal lids apart” makes the star seem like a lone contemplative being.

The star’s loneliness is emphasized as it is “hung aloft” in “lone splendor”, giving the image of a star floating high above from earth.

The fact that the star is “gazing on the new soft-fallen mask/of snow” also suggests its large distance from earth, as the star is unable to see the real earth, and is so far away that it can only see a “mask”, a word which becomes emphasized when reading the poem due to the rhyme scheme. The mention of the snow also makes the tone seem cold and peaceful. The simile and allusion as the star is compared to a “patient, sleepless Eremite”, which is a religious hermit, serves to further enhance our image of the star as an everlasting, steadfast creation patiently observing earth from high above. This role of the star is similar to the role of the persona in the final sestet as he quietly observes his sleeping “fair love”, but the crucial difference is that while the persona is desirably close to his lover, the star is alone and “aloft”, which is what the persona does not want to be.

The last line of the octave ends with an em dash, and there is a volta, or a change in tone and thought as the poem shifts from describing the star and the quiet nature to depicting the intimacy between the persona and his lover as the persona expresses his desire to stay in this sweet moment forever, as eternal as the star. The volta between the octave and sestet, serves to contrast the cold, distant quality of star with the warm, intimate quality of human relationships. In the first line of the final sestet, the tone changes from contemplative to more conversational as the personal declares “No”.

In the following lines, the alliteration in “still stedfast, still” and “soft fall and swell” make the tone soothing and comfortable. In line 13, the repetition of “still” and the alliteration of “hear her” and “tender-taken” tends to force the reader to say the whole line in one breath, so that his/her breath becomes “”tender-taken” as well, and emphasizes the content, sensual and intimate tone. The intimacy of the lovers is shown through the imagery: “Pillow’d upon my fair love’s ripening breast”, which reflects the closeness that persona values but that the star lacks.

This tension is increased by the oxymoron of “sweet unrest” and by the climactic last line of the poem: “And so live ever-or else swoon to death.” The use of the phrase “or else” seems ominous, especially because we know that in reality, he will not be able to become as steadfast as the star, so he will eventually die. However, the tone becomes less gloomy through the use of the word “swoon”, the positive connotation of which suggests that the persona accepts a death in love. This implies that although he deeply wishes he could be eternal like the star, he realizes that this is not possible and thus embraces his status as a ephemeral human gifted with intimacy by accepting death as long as he experiences love in his life. The significance of the last two lines of the poem is emphasized, as they are a rhyming couplet.

Ultimately, Keats’ masterful use of figurative language results in a deeply meaningful sonnet that contrasts the eternal but isolated qualities of nature with the ephemeral but intimate qualities humans. Although this sonnet is short, its scope is large as it explores the inner desires of the persona to have the best of both worlds. Through the many literary techniques, the poet reveals the conflict between the impossible desires and the possible, and the natural world and human world. 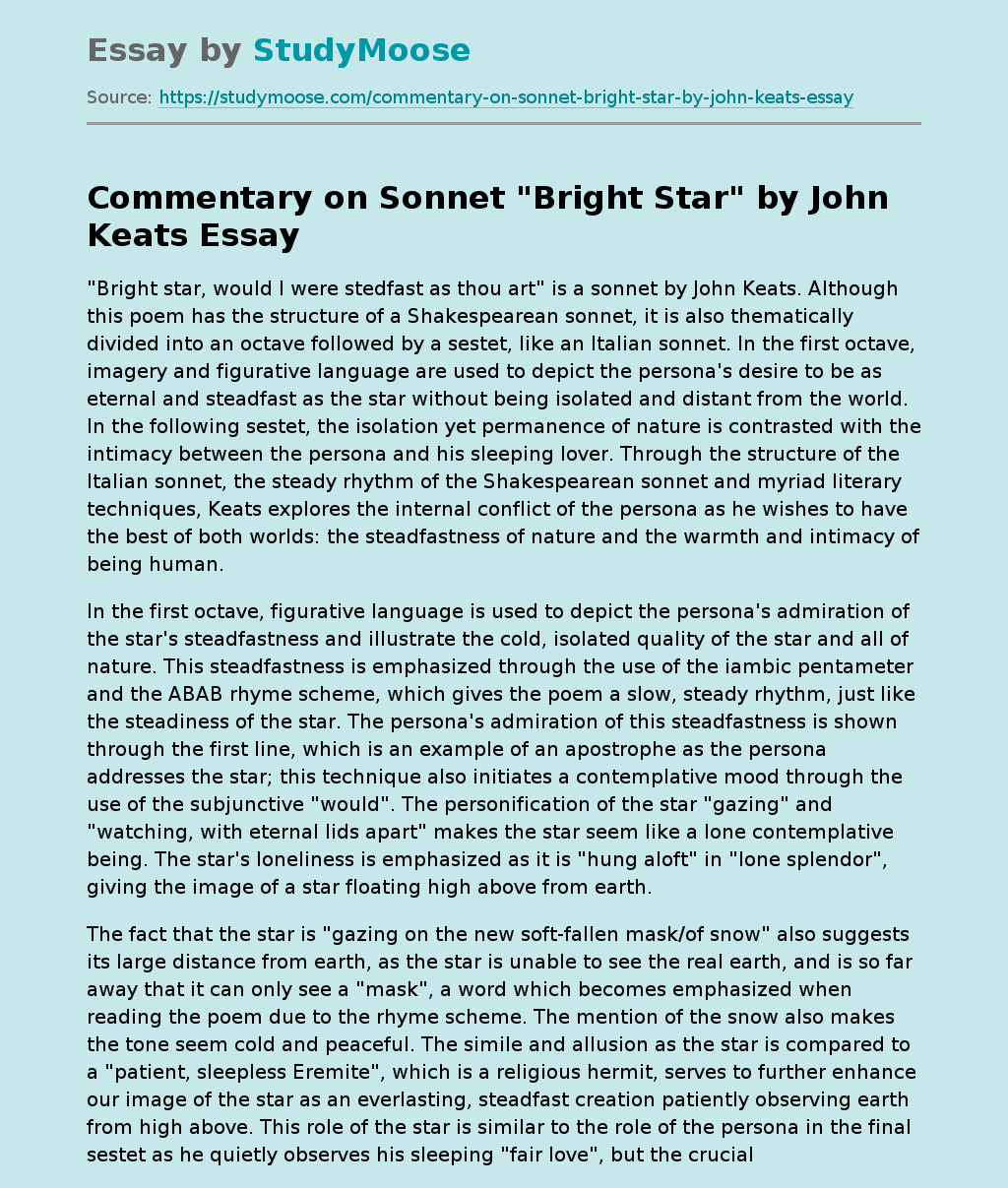