Hate speech is a form of communication that discriminates against one person or one group. “Hate speech is a term for speech intended to degrade, intimidate, or incite violence or prejudicial action against someone based on race, ethnicity, national origin, religion, sexual orientation, or disability. The term covers written as well as oral communication.” (USA Education Guides). In many countries, the right to free speech is guaranteed under the constitution, however, it is a right that should not be used to discriminate, abuse or undermine other people.

Many people do misuse of the rights that they have in a democratic society and it can often hurt others in many ways. Although freedom of expression should be respected, hate speech is a form of discrimination that should be punishable by law. Many people believe that freedom of expression gives them the right to talk about absolutely everything and they can really talk about everything, as long as it does not discriminate against another person.

Hate speech ridicules and belittles people who do not need to hear it. Freedom of expression has to be a limit; the right of freedom of expression is not absolute because it can influence the other people’ life. People cannot say anything calumnious or slanderous without consequences, like be punishable by law. As a famous phrase says: “your right ends where the other’s right begins”. It means that the right of a person ends from the moment that this person interferes negatively in the life of another person.

The right of people is about their own lives. People have the right to have whatever views they would like. However, having a view and mistreating others are two very different things. A person can have any view they like as long as it is simply their view. According to Marsden Rachel, In support of a democratic community, people can do anything they want until their behavior violates anyone’s freedom. Thenceforth, the government must to intervene in, if only to keep individual freedom. If the government doesn’t intervene in those situations, when interference would be required to adjust the situation, then the situation can stay out of control until the time when major providences will be taken. (Rachel). People who defend hate speech think that the society should know how to deal with the opinions of others but they forget that people who are discriminated against can be excluded from society because of hate speech.

People should learn to listen to criticism, which can be constructive, not insults, which are malicious. Criticize a person can be a good thing, giving opinions to improve the person and it something that should be done, with respect, by everyone. Insult is a verbal violence which aims to humiliate and belittle others. People became isolated, can get sick and sometimes may commit suicide when they are victims of hate speech because it can change their behavior. According to a research conducted by some professors in the Syracuse University, correlation between hate speech and suicide rates remains constant. Some people committed suicide after be victimized by the society due to sexual orientation, race or religion, for example (“Correlation”). When a person practices hate speech, it can influence other people to do the same thing, like a “snowball” effect, increasing the withdrawal of discriminated people from society and friends. Everybody has the right to raise children according to their family’s beliefs. However when parents teach their children to discriminate against other people, hate speech will spread around the world; children should not be raised to discriminate others. Children should learn from birth that discrimination of other people is wrong regardless the religion, for example, and that everyone is equal because children are the future of society.

This idea about ridding children of hate speech should be a global consensus. Children should play with other children of another religion, race, colour, ethnic, origin or sexual orientation, for example. It is important because the children should learn with different people and new cultures to see that hate speech is not necessary because all of them are equal. Family’s beliefs are to keep the family tradition and raise children, and a family’s beliefs must respect other family’s beliefs. Some people think that anyone who does not belong to predetermined standards by society should be eliminated from society. This kind of thinking can be considered the most advanced stage of hate speech and it can reach dangerous proportions. Genocide is an extreme action caused by hate speech and it is one of only a few kinds of attitudes that is identified as a crime under international law, similar to other cruel crimes. People must learn to accept, to adapt and to live together with different people. The world would be boring if everyone was the same in everything. Each person has a role in society and nobody is more important than others. A person has the right to be like the person is and he or she should not change to please others. Everyone has to realize how dangerous hate speech can be and the consequences that it can generate. According to Arthur Joyce, hate speech is a harmful thing that can affect the people’s behavior because of its strength. The violence can also be caused by words, not only by physical violence and an example for it is the killing of the people who promoted abortion in the USA. Hate speech develops separation and bigotry; it also damages people who are discriminated. (Joyce & Tatchell) Just because a person is different and is out from “society’s standards”, this person must not be discriminated against, humiliated nor required to listen to hate speech from others just because the others can say anything they want. Therefore, people who practice hate speech should be punished by law. Freedom of expression must have a limit, children can be raised according to family’s beliefs, but respecting others, people must learn to live together with others and people who practice hate speech should be punished in order to have a society with justice and equality where people are united and without discrimination. Hate speech is not only hurtful but it can kills discriminated against people in its most advanced stage. Think of hate speech as a disease with a cure. The cure is education and awareness together with personal empathy for others. Every people who practices hate speech and offends others should be punished by law with imprisonment, fine or volunteer work, depending on the case. 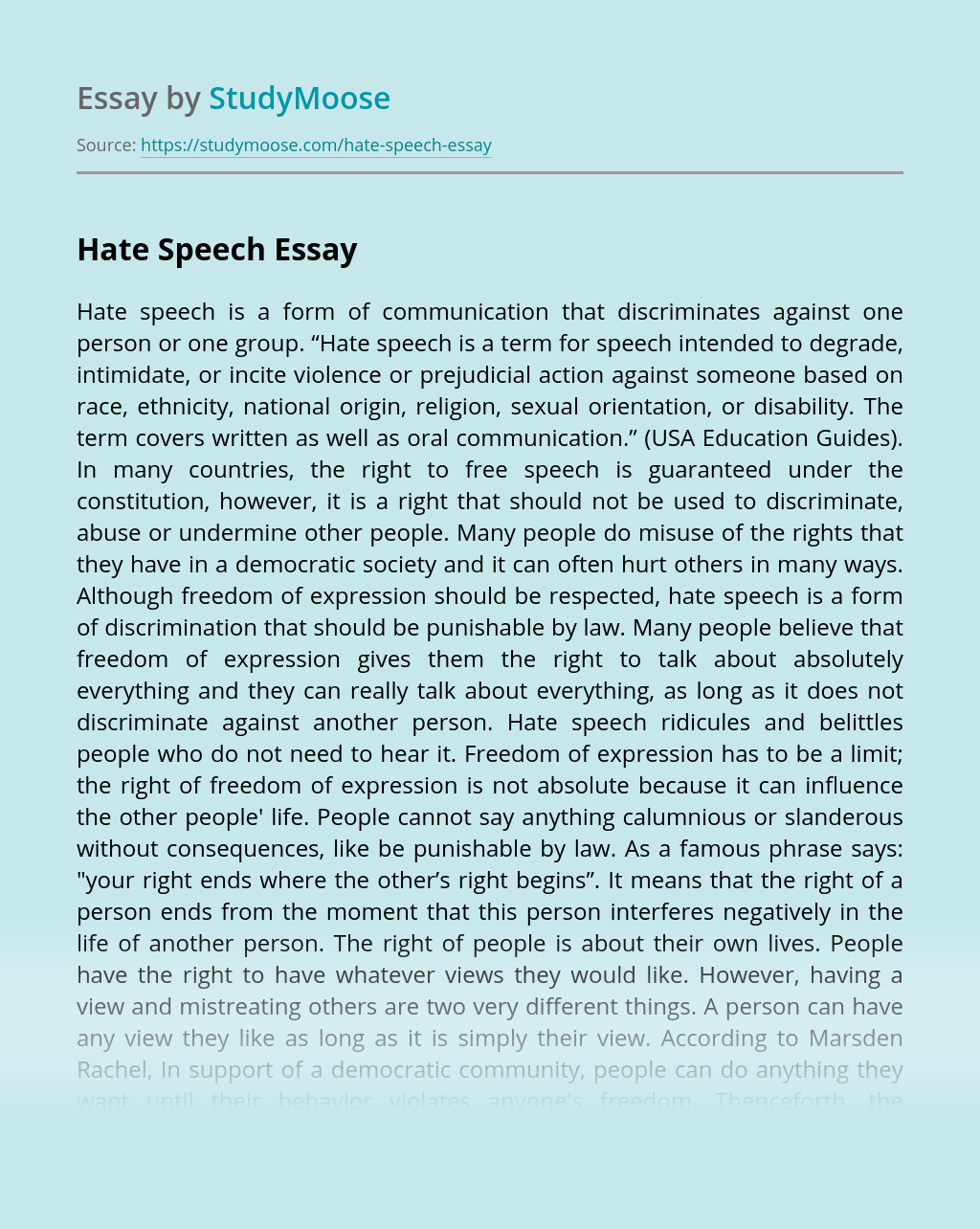