Ever since the first printing of the first Harry Potter novel, the book series has been under attack from people arguing that the books are intended to initiate children into witchcraft and demonic practices or that they undermine traditional spiritual values. Yes, indeed, there are ghosts and Halloween, and the practice of magic. However, Harry Potter books are no more a threat to the traditional spiritual values of our children than The Wizard of Oz was before them. Harry Potter has not grown up in a “normal” family, even outside of the wizarding world.

+84 relevant experts are online
Hire writer
Don't use plagiarized sources. Get your custom essay on
“ Harry Potter and the Sorcerer’s Stone Analysis ”
Get custom paper
NEW! smart matching with writer

The Dursleys do not care for Harry and treat him poorly. They are clearly nominally Christians; in Chapter Two, Harry’s uncle threatens him with punishment, saying that Harry will “be in that cupboard from now until Christmas” if he is involved in any “funny business” (24). There is no evidence, however, that the Dursleys ever practice any particular faith. That lack of spiritual practice carries through the book, even in the wizarding world. .While no one falls to his or her knees in religious fervor, neither does anyone sacrifice a goat to Satan.

Rowling has kept her books carefully neutral, but not because she wishes to undermine traditional spiritual values. Rather, it seems that Rowling wishes to appeal to the largest possible audience, without appealing to one spiritual belief over another. Rowling presents Halloween in such a manner that would appeal to the imagination of children, with bats, candles in pumpkins, and a feast; however, it is also merely a backdrop for the action that brings the Three Musketeers of Harry, Ron, and Hermione together (Rowling 172-179).

Later in the book, the characters celebrate Christmas.

Christmas, however, is no different from Halloween. The Christmas break serves only to give Harry a quiet moment to investigate the library and to investigate the Mirror of Erised (Rowling 204-209). Once again Rowling is carefully neutral, describing Christmas only in terms of what would appeal to children. While Rowling focuses primarily on food, gifts, and games, Ron’s brother George also takes the time to tell another brother that he will not be sitting with his fellow prefects, because “Christmas is a time for family” (203).

Rather than glorifying the wizarding world, Rowling chooses to show that the wizarding world is no more appealing than the Muggle world. There are still bullies there: Draco Malfoy is just like Harry’s cousin, only he is thinner and can ride a broom. Friendship and loyalty and knowledge are all valued there; fellowship and fun are as much a part of the school as magic is. Harry Potter and the Sorcerer’s Stone is simply a fantasy story about a boy and his friends away at boarding school. The only real magic connected to this book is that it rekindled many children’s interest in reading. Who can truly argue with that result? 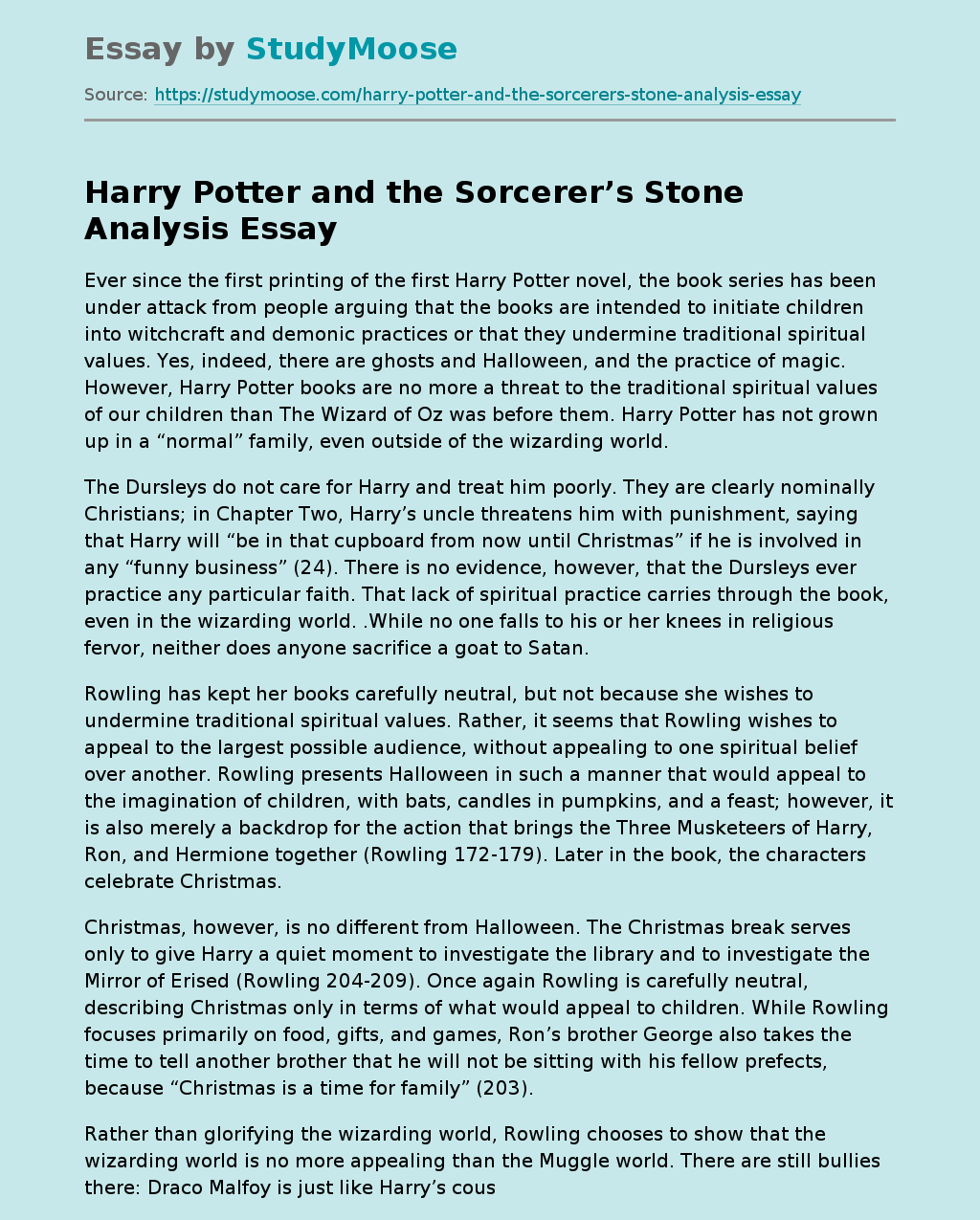