Harriet Tubman was a hero that completed many brave and selfless acts. She was born in Maryland in 1822 and by the age of 5, she was already working. She got married in 1844, to a free black man, but she was still a slave. Finally, in 1849, her master died and she decided to escape. That is when her great achievements began. Her first great achievement was operating the Underground Railroad. Her journeys to grant other slaves were hundreds of miles long. She traveled from Maryland all the way up to St.

Turn in your highest-quality paper
Get a qualified writer to help you with
“ Harriet Tubman’s Great Achievements ”
Get high-quality paper
NEW! AI matching with writer

Catherines, Canada on foot. She took them all the way to Canada to get them away from the danger of the Fugitive Slave Act which was an act that made Northerners turn in runaway slaves.

Harriet was 28 when she made her first rescue and 38 when she made her last. All of the 23 fugitives were collected in Dorchester County, Maryland. To avoid capture, Harriet took trips at night in December, took slaves on Saturday nights (Sunday was a free day and they wouldn’t be needed until Monday), and never met the fugitives at plantations.

This was a great achievement because doing this was very long and had many dangers that were all avoided by Harriet even thought she had up to 11 people with her.

The next great achievement of Harriet was when she was a spy and rescued 800 slaves in one night. One year after the start of the Civil War, Harriet Tubman was asked by the government of Massachusetts to join the Union troops in South Carolina.

She there lead a team of eight black spies to operate behind the enemy lines and provide information for a Union raid to free slaves. The Combahee River raid took place on June 2, 1863. This was a great achievement for “Moses” ,(Harriet’s nickname, given to her because she was leading slaves to freedom), because she helped 800 slaves in one night.

Harriet’s next achievement was becoming a nurse for the Massachusetts 54th Volunteers , an all black group of solders. These solders attacked Fort Wagner in Charleston Harbor and Harriet was there to care for the wounded. While working, Harriet never got paid by the army so she had to sell baked goods and root beer to the solders. Even thought Harriet worked so hard, her actions were never recognized by the army. She never received pension and only took her rations 20 times. This was a great achievement.

Finally, Harriet’s last great achievement was taking care of poor and sick people. Harriet took the 48 years from the end of the Civil War to her death to taking care of poor and sick people in her home. She typically had six to eight people that she was caring for. In a quote from her, she states that she took care of the old, paralyzed, blind, and people with other sicknesses. These achievements were all great, but I feel that Harriet Tubman’s greatest achievement was when she was a spy for the Union and helped free 800 slaves. Compared to the other achievements, I think this one is definitely more heroic and deserving of more praise. Harriet Tubman was an amazing hero that will never be forgotten because of her compassion and bravery. 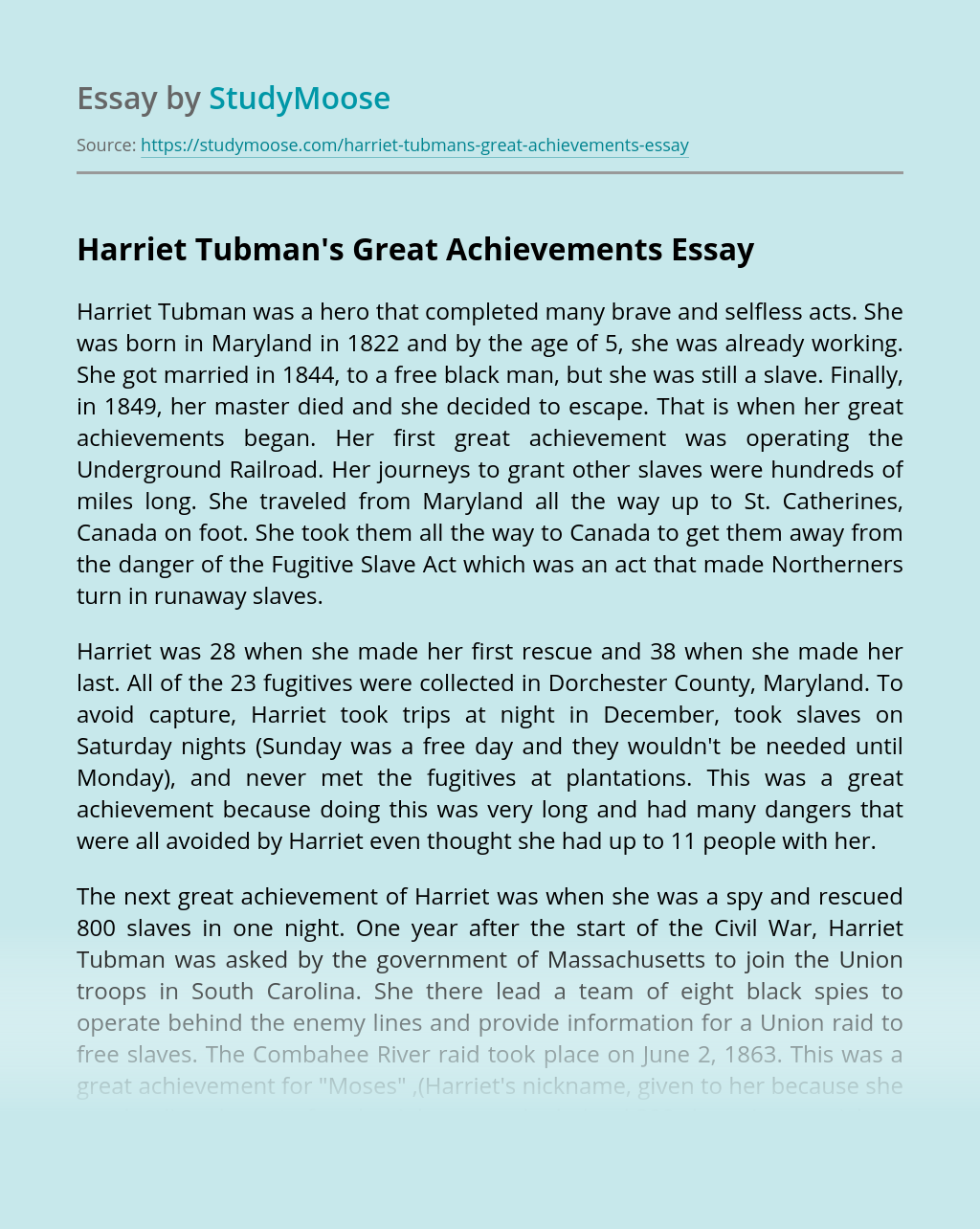 Turn in your highest-quality paper
Get a qualified writer to help you with
“ Harriet Tubman’s Great Achievements ”
Get high-quality paper
Helping students since 2015
Stay Safe, Stay Original