Han dynasty and Mauryan/Gupta empires developed in roughly the same time frame and overlapped in the years 320 B. C. E. – 220 C. E. developing in different parts of the globes with their own unique geographies. Both the Han and Mauryan/Gupta empires developed bureaucratic governments that were ruled by kings, but due to the different geographical regions, India’s government was fragmented into local governments. The Han Dynasty of China was structured off of a social philosophy while Mauryan/Gupta India followed a religion which united the subcontinent.

Don't use plagiarized sources. Get your custom essay on
“ Han China and Mauryan & Gupta India ”
Get custom paper
NEW! smart matching with writer

The Han and Mauryan/Gupta empires also both developed agrarian economies although their view on the merchant class were nearly opposite. The Han and Mauryan/Gupta empires both created hierarchical, bureaucratic governments. The hierarchy in China’s government was more flexible and was set up in the 5 relationships (ruler and subject, father and son, husband and wife, oldest son and younger brothers, and friend and friend) whereas India’s hierarchy was rigid and created through the Caste System (Brahmin, Kshatriyas, Vaisyas, Sudras, and finally the Pariah).

Ultimately, both hierarchical bureaucracies were led by a king. In China, the Han dynasty was able to create a strong centralized government led by kings who claimed the divine right to rule China, or in the case of the Chinese Dynasties, they claimed the Mandate of Heaven. However, because of the geography of India, such as the Deccan Plateau and the Hindu-Kush Mountains, the government of India was broken up into local governments.

Whereas China needed a strong centralized government in order to unite its people, India could get away with having a weak central government because Hinduism would ultimately unite the people of the Mauryan/Gupta empires.

Hinduism, the major religion of India which also kept the people of India united when the regional governments could not, was based on the principle of a cycle of rebirth known as samsara. Under this religion, the main focus of the people was to achieve moksha – uniting with Brahman – and escaping samsara.

Both empires also relied on the use of conscripted labor but in Han China it was drafted labor and in Mauryan/Gupta India it was through the use of the pariah (“untouchables”) class from the Caste System of Hinduism. Even though their economies, in principle, are identical, they had vastly differing views of the merchant class. In Han China, they were viewed as the “mean people” and scum of the Earth whereas in India, they made up the Vaisyas caste which was their middle class. 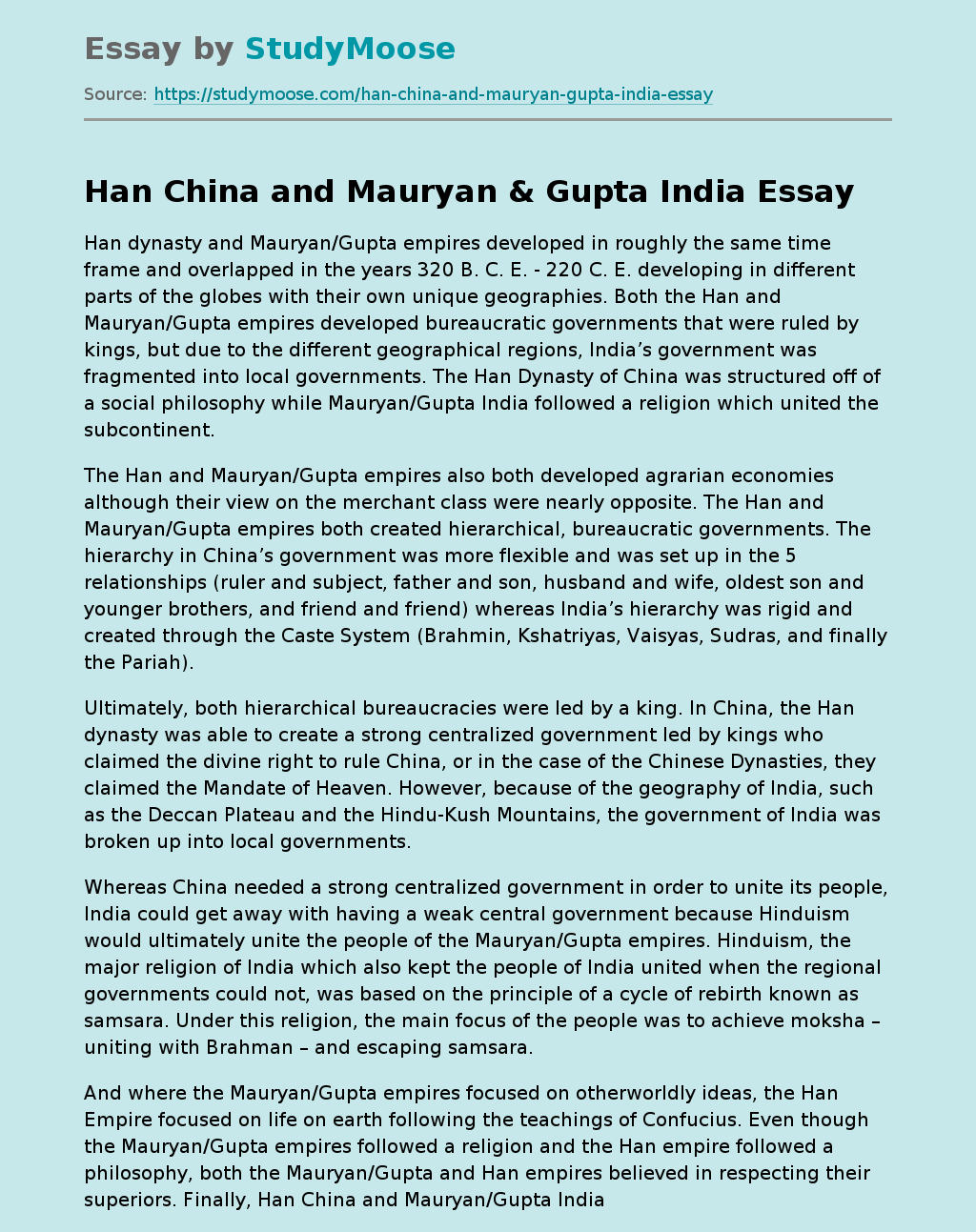