Hamlet's Emotions in the First Soliloquy

In the play Hamlet, Shakespeare creates a rich emotional fabric in Hamlet’s first soliloquy. From the first lines of the soliloquy, we can find such emotions as depression, disillusion, anger, and even the hatred and disgust for Hamlet’s mother and uncle. The first line in the soliloquy shows us depression: “O! that this too too solid flesh would melt,/Thaw and resolve itself into a dew” (Shakespeare 42). Hamlet’s depressive spirit is explained by that he is tired of life and wants to die.

Don't use plagiarized sources. Get your custom essay on
“ Hamlet’s Emotions in the First Soliloquy ”
Get custom paper
NEW! smart matching with writer

The reason for this is that all of the events, like King Hamlet’s death or Claudius’s marriage with Gertrude, Hamlet’s mother, which happens with the Prince press on him. As for the being disillusion about the Queen, when she marries Claudius, Hamlet asks himself “why, she would hang on him,/As if increase of appetite had grown” (Shakespeare 42). Hamlet feels disillusioned about his mother because after two months when his father dead, she married Claudius.

In Hamlet’s opinion his mother betrayed his fathers love. Also Hamlet feels too angry with his uncle, so he compares Claudius with his father, who was “so excellent a king” and says about the new king “that was, to this,/Hyperion to a satyr” (Shakespeare 42). The young Prince can’t understand how his uncle can be a better king than his father. Hamlet is angry with Claudius because that “satyr” married his mother and called Hamlet his son, without asking his opinion or wish. Hamlet is not only angry with his uncle, but also he hates Claudius: “My father’s brother, …/within a month,/Ere yet the salt of most unrighteous tears/Had left the flushing in her galled eyes” (Shakespeare 44).

Hamlet hates his uncle because Claudius seduced his mother.

Hamlet's Emotions in the First Soliloquy. (2016, Mar 25). Retrieved from http://studymoose.com/hamlets-emotions-in-the-first-soliloquy-essay 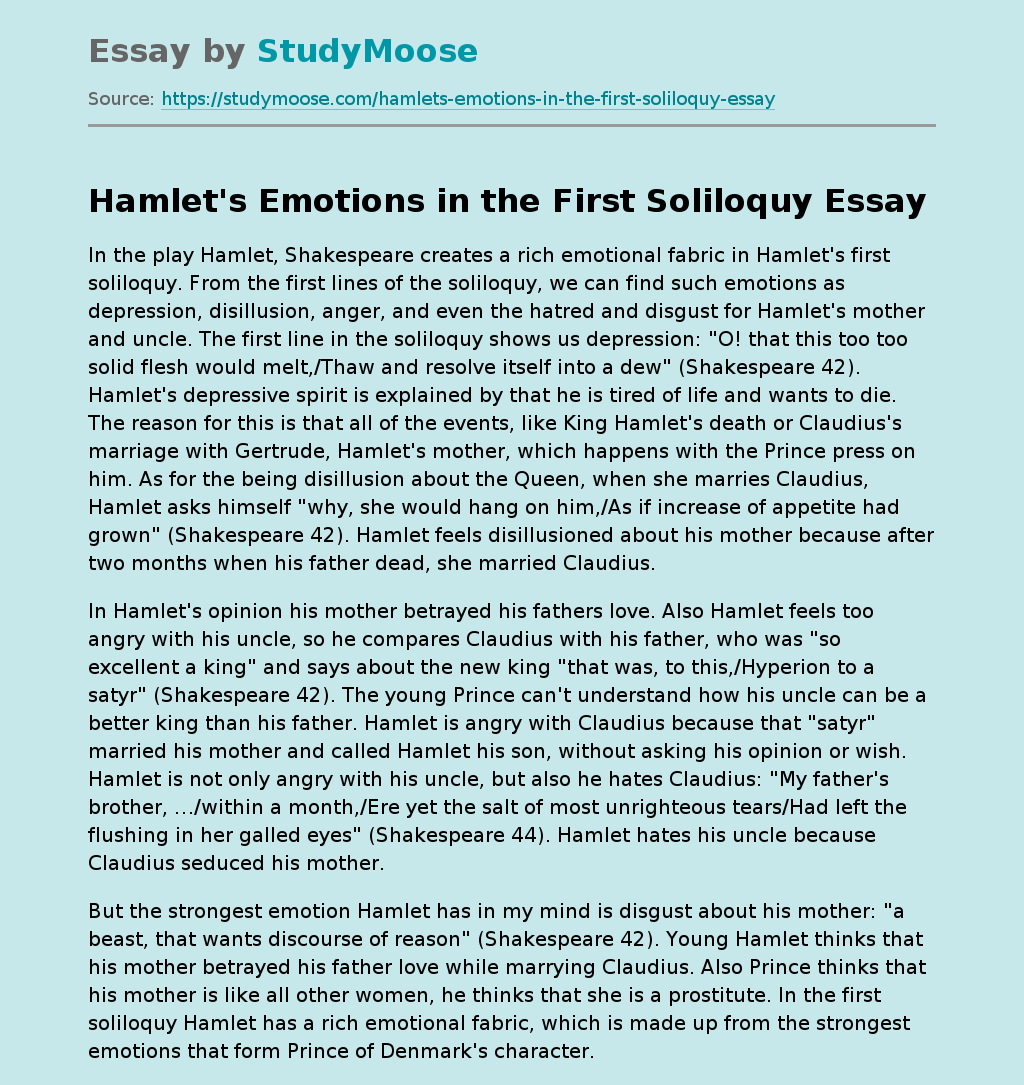