A key issue in William Shakespeare’s Hamlet, is that of the validity of Hamlet’s “antic disposition”. Views contradicting the belief that Hamlet’s mind and nature is one of insanity would state that Hamlet merely wears a mask to “feign” madness – this mask is formed into the “wild and whirling words” which confuse so many. Weller states that “he can use it to gather knowledge as he originally intends to, and then come out with what he has learned in the end,” which is of course, to “have grounds more relative” than basic assumptions of Claudius’ doing in the death of Hamlet’s father.

Don't use plagiarized sources. Get your custom essay on
“ Hamlets antic disposition is feigned ”
Get custom paper
NEW! smart matching with writer

I, however, believe that Hamlet – although appears to be feigning madness throughout the play – slowly and steadily, begins to descend into the “disposition” he initially wished to “feign”, and although Weller’s statement does assume a purpose for the apparent “feigned” madness, there are many instances in the play which suggests that Hamlet’s sanity is decaying.

Within the scene of Hamlet’s introduction, we see him portrayed as very weak, melancholic man – as exemplified through his clothes of “nighted” colours.

He is consumed by the grief of the passing of his father, the “dexterity” of which his mother re-marries, and her pleasure in entering the “incestuous sheets” with Claudius – Hamlet’s Uncle, and Hamlet senior’s brother. I state now that it is this grief and severe depression which already taints his sanity – Hamlet’s nature is already harmed and cannot heal from such a fast sequence of shocking events.

Moreover, after everyone leaves he is able to contemplate on his own and so ensues the first of his many soliloquies – which conveys his bordering into the realms of insanity through his contemplations of “self-slaughter” but retracts when he considers the fact that God has “his canon ‘gainst self-slaughter” – religion was taken into high consideration at the time of the 17th century, especially since it was a time of renaissance.

His ability to compare with religious ethics to human actions now, still shows traits of his remnants of sanity – throughout the play, however, this sanity is stripped away as shown by the juxtaposition of his depressed, yet sane soliloquy now, when compared to “no relish of salvation/ his soul may be as damned and black as hell whereto it goes” within the praying scene.

“Hamlet is a Renaissance man, loving contemplation and physical action” (Stoll) – studying at Wittenburg – where Martin Luther nailed his 95 thesis up on the church doors, the thesis which changed religious views on God and formed a schism – at the time of the renaissance, he would have been very educated in the teachings of God and religious ethics.

Hamlet however, shows no consideration towards the ethics of religion and morality, and what’s more, acts as the final judge – replacing God – by “contemplating” for Claudius’ death to be ensued after an action of sin – therefore, no “salvation” will await him, and he will be “damned” – acts which completely contradict the rather basic analysis of Hamlet as a renaissance man; re-enforcing the view of Hamlet’s descent into insanity.

As aforementioned, Hamlet is already consumed by grief, and the decaying of his sanity had already begun – the prolonging of his grief as opposed to others, obviously shows that he is not yet finished with the matter. Due to his inability to let matters rest, Horatio’s news of a sighting of his father not only breaks him from his dreadful cycle of depression and decay, but allows his obsession to wander onto the death, rather than the grief – “till then, sit still my soul”.

His obsession replaces his grief – this makes him much threatening than before as he now becomes a man who “acts without reflecting and reflects without acting” (Santayana), in other words, a man with no remorse, and no awareness of consequences; clearly shown by the murder of Polonius.

Hamlet waited for no evidence for confirmation of the identity of the presence – furthermore, after the realisation of his severe fault, he spends a mere three lines on the event, insults the dead – “thou wretched, rash, intruding fool” – and altogether show no remorse whatsoever; he has clearly abolished his religious beliefs about sin and judgement, as he had just committed the most severe sin of all, murder, and not even for vengeance.

Due to this disregard for his own morals, ethics and religious beliefs, I will have to say that he has been consumed by his own insanity to the level that he can only now obsess about his revenge against Claudius for the murder of his father. The Ghost – as already discussed – is the source of obsession for Hamlet; however, the validity of the Ghost must also be taken in consideration.

To see and communicate with a ghost in this modern day would be analysed with very sceptic views, however, if brought back to the 17th century – spirits, ghosts, and all things supernatural were seen as frightening, but still very real. Bradley states that the Ghost is”… a soul come from Purgatory,” therefore, if the ghost is believed to be real, then his demands for revenge would be real, which implies Hamlet’s sanity; however, in the modern 21st century, psychologists would say with convincing research that on some subconscious level, what Hamlet heard was what he wanted to hear.

The resemblance behind meaning of the Ghosts soliloquy when compared with Hamlet’s initial soliloquy is uncanny – some evidence linking both of the soliloquies are the accusations of “damned incest”, and in particular, the “seems” of actions and characters, particularly Gertrude; proving that the Ghost is not a “soul from Purgatory”, merely an idea about Hamlet senior’s death, manifested into a physical form. One could contradict this view by stating that Horatio and the guards also witnessed the Ghost – although this is very true, one particular action they did not perform was hear the Ghost.

Sight is the most suggestible of all the senses on the human body, so to have a witness of the existence of the Ghost based on sight would be highly unreliable. To further contradict Bradley’s views on the Ghost being from purgatory, if the Ghost was indeed from purgatory, then it would be preaching atonement instead of murder, however, it performs the latter and does not mention atonement – any sane man would dismiss this absurd preaching as ludicrous, however, due to Hamlet’s aforementioned obsession with his father’s death, he makes himself believe, no matter how ridiculous revenge and murder for justice sounds. 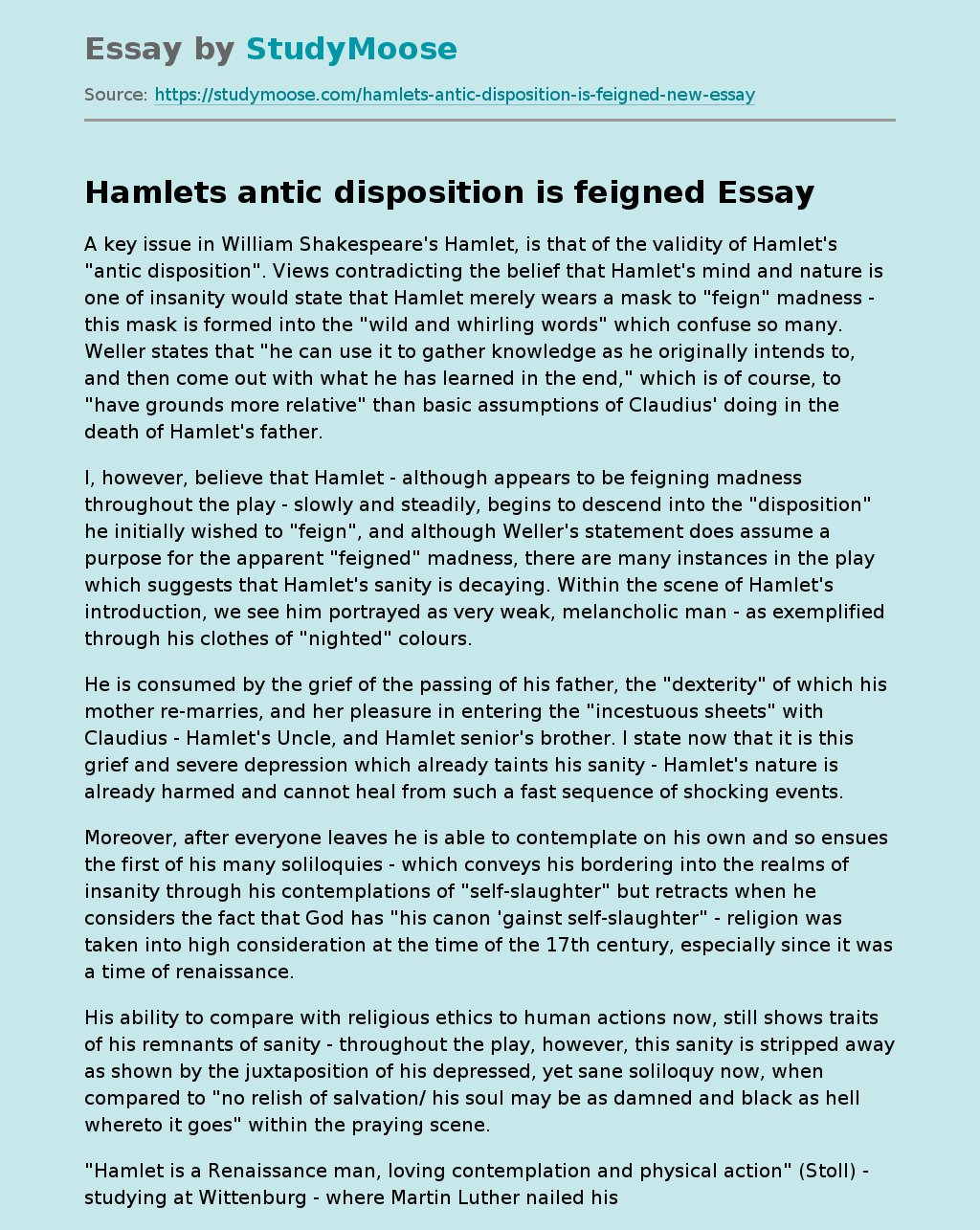