Hamlet’s flaw is that he has a hard time carrying out his plans; he does not have the raw passion that enraged Laertes (). Hamlet took time to think about his actions and the consequences for his plans, many times did he think of doing them, yet he did not carry out them out. Hamlet was not a forgetful, evil character, but more of a tragic hero.

The beginning of the play sets out the story and the Ghost of Hamlet’s late father reveals the truth about his murder to his son.

He tells Hamlet to avenge his death. Hamlet’s response seems like he has quick plans to carry out his fathers wishing, by saying “Haste me to know’t that I with winds as swift… May sweep to my revenge.” (I v 33-5)

Unfortunately, Hamlet’s inability to act on his father’s extortion has him reluctant to kill the King Claudius by the end of that very scene, when he says, “This time is out of joint, O cursed spite – that I was ever born to set it right.

” (I v 206-7) Here, Hamlet is already having doubts and wishing that he wasn’t the one that had to carry out the revenge for his father. Obviously Hamlet has real problems when it comes down to dealing with things.

As the play goes on, Hamlet still has not done a thing to avenge his father. In Act II, Scene 2, Hamlet decides that before he can avenge his father’s death, he must make sure that the Ghost was telling the truth.

This simply gives Hamlet more excuse to procrastinate. Hamlets play is a parody of the way Claudius killed the previous king and took his wife. When the play is seen by Claudius, Claudius becomes outraged and ends the play. Hamlet knows now that Claudius is guilty. He justifies this inaction by saying “The spirit I have seen – May be the devil…” He is very firm in his believe of faith and he does not want to be pulled into Hell because of a filthy deed given to him by a demon. However, because of Claudius’ reaction, Hamlet knews the ghost was true. He comments to Horatio, “I’ll take the ghost’s word for a thousand pound.”

In act III, scene 3, Hamlet is ready to kill the king, but stops himself because the king is praying. Again Hamlet’s faith stops him from the horrid act of regicide. Because the king is praying that if he killed him now the king would go to heaven. He decides yet again to delay avenging his father’s murder, this time until he can kill the King while he is in a vile condition, such as “When he is drunk asleep; or in his rage; Or in the incestuous pleasure of his bed.” (III iii 92-3)

In the end of the play, we see that Hamlet’s inability to act causes his tragic demise. Hamlets failure to revenge his father when he should have, costs him not only his life, but also his mother’s. In the final scene, Hamlet duels with Laertes, who has conspired with the King to kill Hamlet. In the King’s attempt to kill Hamlet, he accidentally poisons the Queen. Laertes delivers the fatal wound to Hamlet with a sword dipped in a deadly poison and it is only with his final life breath that Hamlet finally kills the King.

So, Hamlet has finally killed the king, but not by going out and slaying the king while he was involved in “incestuous sheets” or “drunk asleep” like he said, but with a poison the king made himself to kill Hamlet. Ultimately, Hamlet avenged his father, and his father’s later wish for the queen to be left to die without Hamlet killing her. However it came at a very heavy cost; Hamlet, Laertes, and Gertrude’s deaths, and Denmark falling into the hands of the Norwegian enemy, Fortinbras. 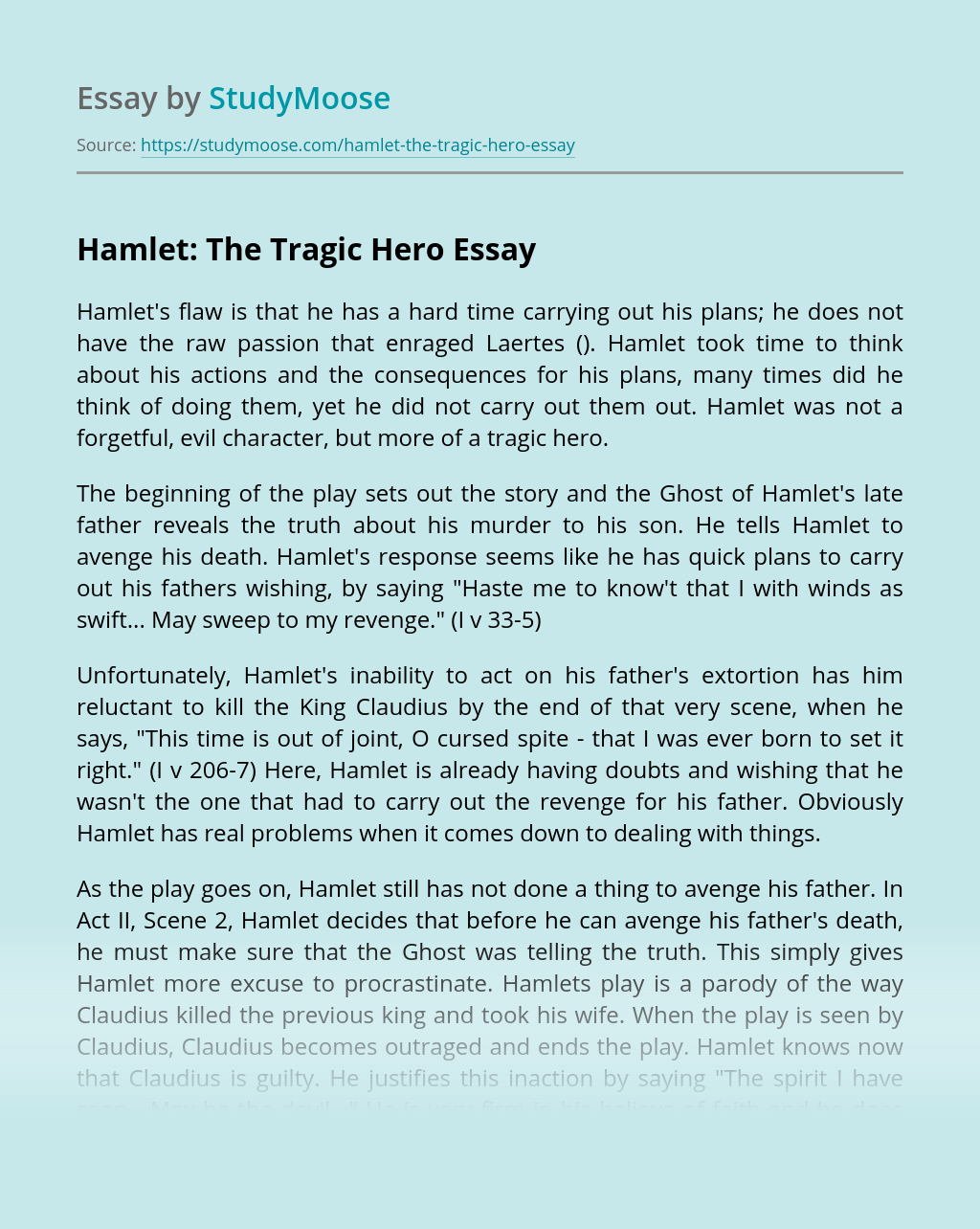 Don’t waste time
Get a verified expert to help you with Hamlet: The Tragic Hero
Hire verified expert
$35.80 for a 2-page paper
Stay Safe, Stay Original