Hamlet, The Prince of Denmark

Much of the dramatic irony and dramatic tension in Shakespeare’s “Hamlet, The Prince of Denmark” derives from the interplay between the characters’ public and private personas. The face that each of the characters shows to the public contrasts with, in most cases, the private persona of the same character. Similarly, the private “face” or motives of the characters usually stands in diametric opposition to their public persona. The most obvious examples of this dynamic is, are course, the characters of Claudius and Gertrude who must, by necessity, keep up a fraudulent set of public perceptions to cover their crimes of infidelity and murder.

Don't use plagiarized sources. Get your custom essay on
“ Hamlet, The Prince of Denmark ”
Get custom paper
NEW! smart matching with writer

These obvious examples, however, are no more profound or integral to the play’s thematic impact than the likewise hypocrisies which afflict nearly every other character of the play. The almost universal nature of social mendacity is represented in “Hamlet” as being,in fact, the source of what is “rotten” in Denmark. The brilliance of the play exists, in part, in Shakespeare’s ability to demonstrate the way in which hypocrisy and being “two-faced” can impact all levels of society and corrupt even friendship and love.

In many ways, the cast of characters in “Hamlet” reflect a social microcosm, with Hamlet, the young Prince, and Ophelia, representing the youth of society and the ghost of Hamlet’s father, Gertrude, Claudius, and Polonius representing the social establishment and cultural traditions which have fostered ongoing mendacity. From the very opening scene of the play, Shakespeare, with a knack for amazing subtlety, writes the following exchange between Bernardo and Horatio: BERNARDO Say, What, is Horatio there?

HORATIO A piece of him.

(Hamlet, 1. 1 25-28) Horatio’s reply indicates, according to critics of the play, that he is referring to the cold night air which has reduced him to a shivering semblance of his former self. However, the line can also be read as a subtle extension of the theme of mendacity adn meant to indicate that even Horatio, who will be revealed throughout the course of the play as a true friend to Hamlet, has been impacted by the “rottenness” in Denmark, the social hypocrisy which holds all in its sway.

Similarly, Polonius, who represents the religious and spiritual aspects of society in the social microcosm of the play, dispenses words of wisdom to Laertes, acting the part of the wise and compassionate patriarch, a man of morals and God. Among his words of wisdom in Act One, Scene Three are the following observations: “Beware/ Of entrance to a quarrel, but being in,/ Bear’t that the opposed may beware of thee. / Give every man thy ear, but few thy voice;/ Take each man’s censure, but reserve thy judgment” (Hamlet 1. 3, 69-73).

Obviously, Polonius fails to live by his own words. He openly intrigues against Hamlet, immersing himself into a quarrel which was not his own, and after doing so, fails to “Bear’t that the opposed may beware of thee” (Hamlet 1. 3, 71), but ends up being killed by Hamlet on accident. Key to all of the ironies which are associated with Shakespeare’s them of social mendacity is the character of Hamlet himself. If the reader or audience member who is experiencing Hamlet believes in the heart that Hamlet is, indeed, mad, then much of Hamlet’s behavior can be explained by madness.

If, on the other hand, the reader or audience member believes that Hamlet is simply presenting yet another social “face” — this one in order to disrupt the hypocrisy of society — then Hamlet’s behavior becomes a method by which Shakespeare examines the heavy toll which is exacted on the individual in a hypocritical society. There is every reason to believe that the latter context is the one which Shakespeare hope to achieve in the play. One good bit of evidence for this supposition is in Act 2, Scene One, when Ophelia, stricken by the state which Hamlet has allowed himself to get into, she voices her concerns to her father, Polonius.

Ophelia describes Hamlet “with his doublet all unbraced” (Shakespeare, 2. 1, 85) and “No hat upon his head” (Shakespeare 2. 1, 86). His appearance is taken to be an indication of his inner-state, propelling the sense of social facade as serving in place of truth in society. Ophelia concludes that Hamlet appeared as though “he had been loosed out of hell/ To speak of horrors,–he comes before me” (Shakespeare 2. 1, 90-91). The implication is that Hamlet’s disheveled state must indicate that he is, in fact, mad.

Obviously, while Hamlet appears mad to others, he is plotting with great, rational precision to expose what he fears is the crime committed by his mother and his uncle. The sub-text of this is that Hamlet should be mad given the reality of the dilemma he faces. The great irony is, in fact, that he is not mad, but sane which will not allow him to live in a world of lies and hypocrisy. When Claudius and Gertrude react with horror to the “play within a play” Hamlet’s response is “What, frighted with false fire! ” (Shakespeare 3. 2, 262) indicating his very rational understanding of the situation and of the reality of social mendacity.

At this point, it seems that merely knowing of the hypocrisy is enough for Hamlet because when Claudius responds “Give me some light: away! ” (Shakespeare 3. 2, 265) it is an admission that he, the King, and by association the whole of Denmark exists in “darkness” which is the darkness of social hypocrisy. Although hypocrisy is never actually justified in “Hamlet,” there is an interesting “reason” which is given in Act 4 of the play as to why people may be so easily led into hypocrisy and self-deception and that reason is: human mortality. When Hamlet observes of the dead that “There’s another: why may not that be the skull of a / lawyer?

Where be his quiddities now, his quillets,/ his cases, his tenures, and his tricks? ” (Shakespeare, 4. 1, 94-98) the reader or audience member realizes that the human hypocrisy portrayed throughout the play represents not only the lies and deceit necessary to facilitate human ambition in a corrupted society, but the human tendency to reject “cosmic” issues such as life and death and human spirituality in favor of materialism and worldly power. Works Cited Shakespeare, William. The Works of William Shakespeare Gathered into One Volume. New York: Oxford University Press, 1938.

Hamlet, The Prince of Denmark. (2016, Sep 21). Retrieved from http://studymoose.com/hamlet-the-prince-of-denmark-essay 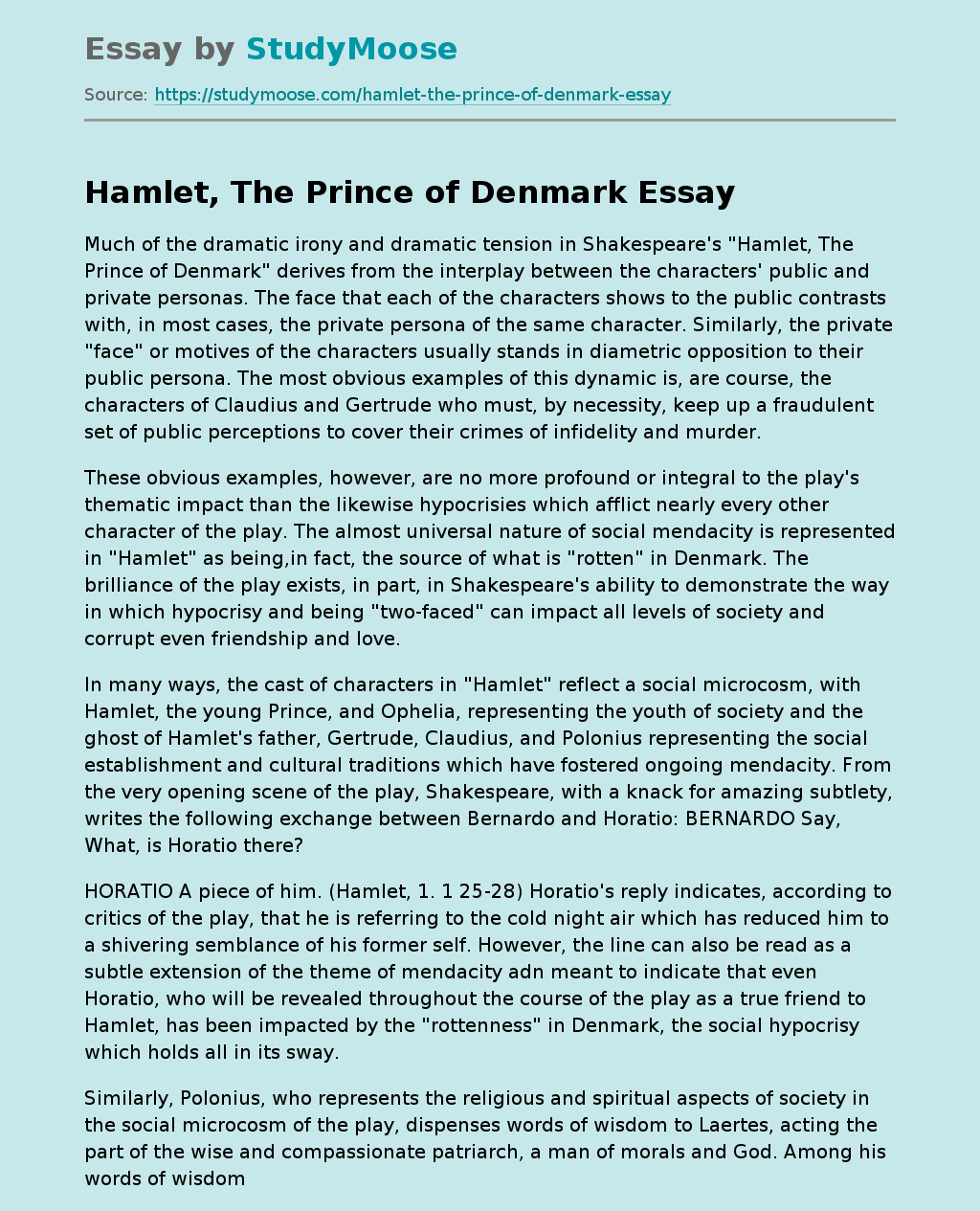