Hamilton and Jefferson About Economy and Government

Hamilton and Jefferson disagreed on pretty much everything; this was easily portrayed in their movements during the early stages of development in America. They had different political philosophies, views on long-term economic outlooks, interpretations of the Constitution, and mindsets on federal versus state power. These discrepancies, however, would eventually help in creating a more balanced government in America.

In terms of political philosophies, Alexander Hamilton had a completely different view form Thomas Jefferson. Hamilton believed that the common people of America often acted foolishly, while Jefferson had a lot of faith in common people such as farmers.

Don't use plagiarized sources. Get your custom essay on
“ Hamilton and Jefferson About Economy and Government ”
Get custom paper
NEW! smart matching with writer

Also, Hamilton thought that it was right for only the rich, educated and wellborn to rule. Another difference in the political ideologies between Hamilton in Jefferson was who had the right to suffrage. Hamilton wanted the qualifications for a voter to be high, such as a very wealthy, white, landowner, while Jefferson thought it would be better for the qualifications to be set lower.

Most importantly, Hamilton supported Britain while Jefferson felt as if America was held obligated to help France.

Their views on long-term economic outlooks were divergent from each other. Hamilton saw the need for a balanced economy that included agriculture, trade, and manufacturing. On the other hand, Jefferson was convinced that the economy should be solely based upon agriculture. Probably the most notable of the differences in economic outlook between Hamilton and Jefferson was their opinion of whether America should have a national bank or not. Of course Hamilton, being a federalist, trusted that a national bank would be of great benefit to the country while Jefferson believed the latter.

Yet another very important dispute between the two great leaders was the use of national debt. Jefferson wanted to go ahead pay off the debt to whom it was owed to. Hamilton, on the other hand, felt that it would be better for the nation to assume all state’s debts in order to create credit.

Finally, the last disagreement that Hamilton and Jefferson had was the idea of federal versus state power. Hamilton, along with the rest of the federalists, believed that the federal government should have more power in order for America to function properly. Jefferson, with the backing of all the republicans thought that a central government would harm America and that power should lie within the states.

Alexander Hamilton and Thomas Jefferson disagreed on many things when it came to the way that America was run. Some of these disputes include; their political philosophies, their long-term economic outlook, their interpretations of the constitution, and their views one federal power versus state power. It is these discrepancies, however, that helped shape America into a more balanced nation and help it to become what it is today.

Hamilton and Jefferson About Economy and Government. (2016, Apr 04). Retrieved from https://studymoose.com/hamilton-and-jefferson-about-economy-and-government-essay 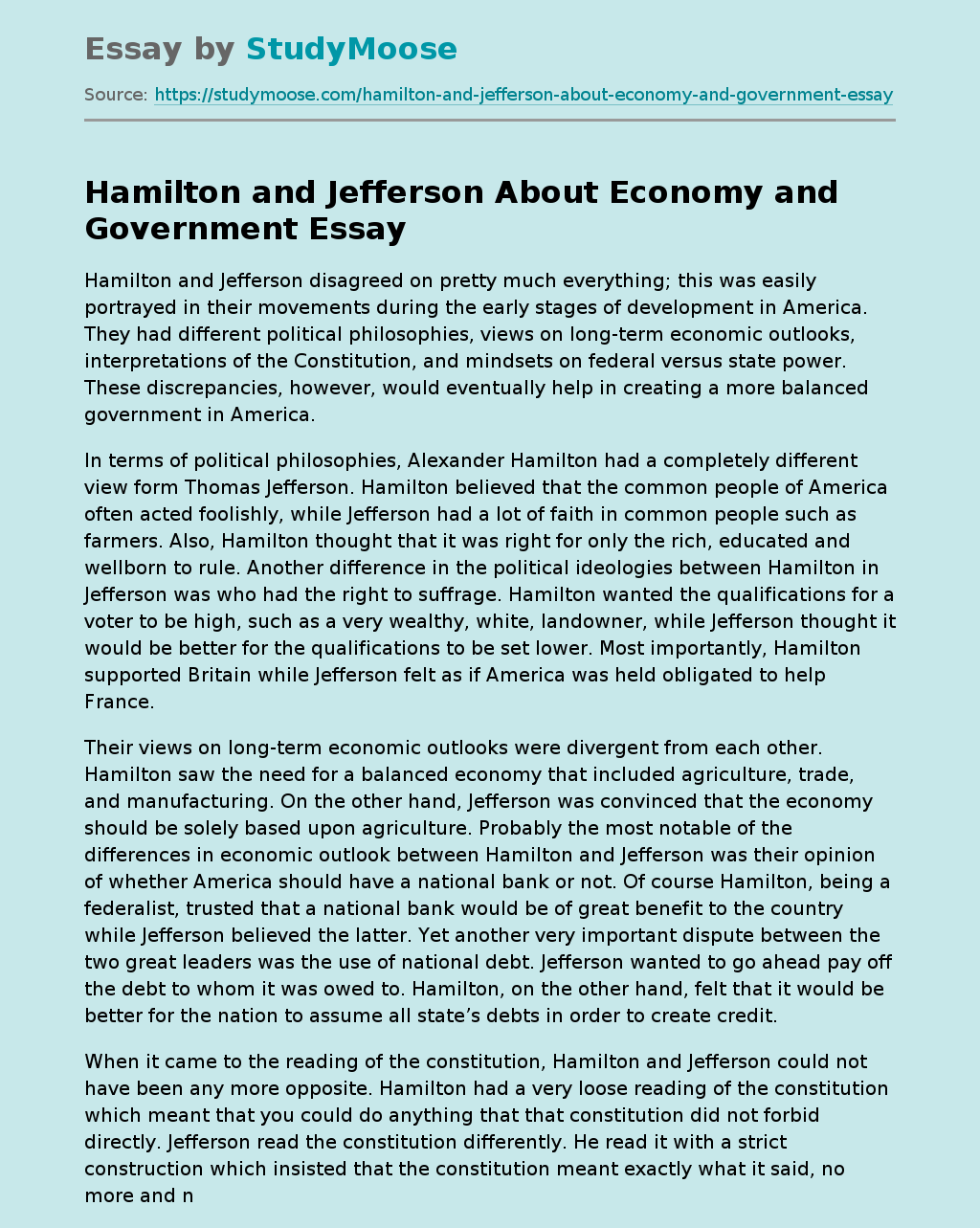