Arguments for and against vegetarianism

What are the arguments for and against vegetarianism?

Seeing animals running around filled with cuteness can bring a smile to anybody’s face. But knowing the fact that most of them will be taken away and butchered creates a number of arguments because some people would simply put this down as cruelty were as others would call it ‘meat.’

Over the past years more and more campaigns and protestations have been started. Talking to a lot of vegetarians I found that their reason for being a vegetarian was because they found it a way of living with avoiding every form of killing animals.

Don't use plagiarized sources. Get your custom essay on
“ Arguments for and against vegetarianism ”
Get custom paper
NEW! smart matching with writer

That or they found it better for their health, as most cancer institutions will approve that vegetarians have a much lower rate of cancer. A lot of people have been found to say ‘what gives us the right to kill innocent lives, animal or non-animal?’ They believe animals have rights too.

Many vegetarians, and especially vegans, also choose to give up the use of all animal products, including leather, fur, and animal products used in common household items and substances.

Some say that killing animals for any reason is entirely unnecessary, while others argue that human beings are not meant to be carnivores at all, pointing to a human’s small canines, flat molars, long intestines and less acidic stomachs, all ideal for eating fruits (carnivores have larger teeth, shorter intestines and stronger stomach acids.) Many feel that all animals are creatures with emotions, feelings, and the ability to feel pain too.

Moving on to the arguments against vegetarianism. First of all, not all vegetarians eat healthy. A great deal simply switch to avoid meat, but still consume large amounts of foods that remain “questionable.” These “lazy vegetarians” usually subsist on a diet of coffee, hard liquor, cigarettes, French fries, potato chips, pizza, ramen noodles and candy, with the occasional vegetable or two. One troubling aspect of vegetarianism, and specifically veganism, is that it can actually be inadequate and can result in nutrient deficiencies. Particularly vulnerable are children, especially infants, who can fail to grow at the proper rate due to deficiencies of energy, calcium, zinc, Vitamins B-12 and D, amino acids and nitrogen in vegan diets.

I find being a meat-eater that there is a food chain, that human’s and animal’s follow.

For instance, Human’s eat animals and plants and Animal’s eat plants and other animals.

People call eating meat cruelty and murder, and to back themselves up they come to ethics. Ethics is the philosophical study of right and wrong, good and bad; it is a critical evaluation of our actions and their possible or real consequences.

They say we are human beings with unique rational minds capable of raising the question of whether killing is right or wrong and governing our behaviour accordingly; we are, in short, the ethical animals.

Once again the question pops up. If we are called ‘ethnic animal’s’ then we should be able to decide between the wrongs and rights of our actions. If a majority of people think that meat eating is not wrong and should be able to take place without the criticising of vegetarians then let it be.

To conclusion it is almost puzzling as to why people choose or choose not to include animal meat in their daily diet. It is also quite a debatable topic because each argument for and against vegetarianism can be disputed. At the end of the day the question revolving around will be, to be or not to be a Vegetarian? It really is a matter of choosing the alternative.

Arguments for and against vegetarianism. (2016, Jun 26). Retrieved from https://studymoose.com/arguments-for-and-against-vegetarianism-essay 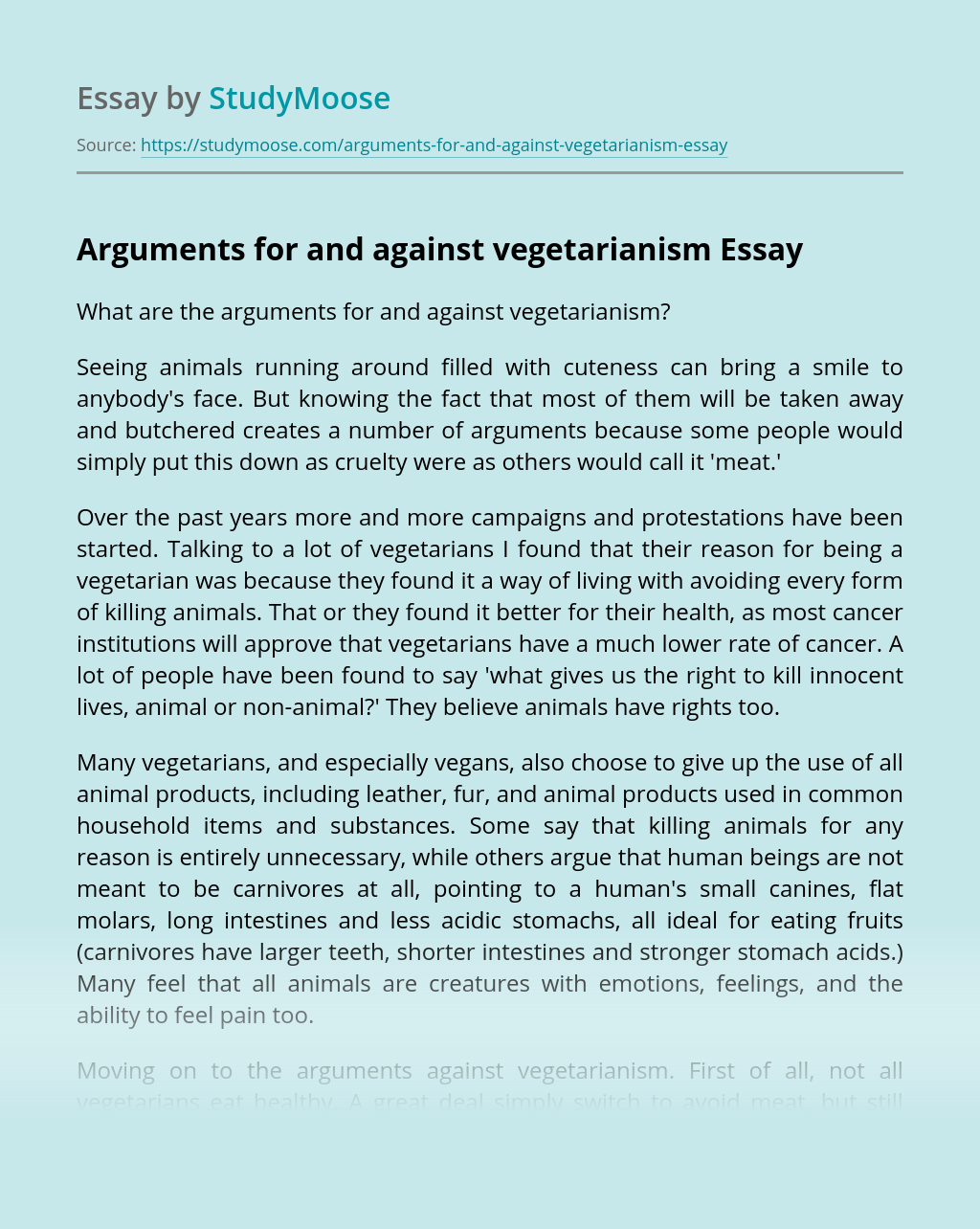