In the history of America, Thomas Jefferson, the Secretary of State, and Hamilton, the Secretary of the Treasury, were two of the greatest leaders of our country. Although they both lead the country, that’s where the similarities end as they had opposing views on everything. Jefferson was a republican while Hamilton was a federalist. Jefferson had been opposed to all of Hamilton’s ideas, such as his financial plan, his interpretation of the powers of the government, his foreign policy, and his vision for the future of America.

Don't use plagiarized sources. Get your custom essay on
“ Jefferson VS. Hamilton DBQ ”
Get custom paper
NEW! smart matching with writer

Jefferson was against Hamilton’s views because his financial plan would ultimately destroy democracy in America, his interpretation of the powers of the government could result in the destruction of the institution of slavery, his foreign policy because Hamilton was Pro-British and England’s Monarchy could spread to America, and his vision for the future of America because Hamilton wanted an Oligarchy government while Jefferson wanted a democracy.

Hamilton’s financial plan was very elaborate, ultimately leading to the preservation of America’s independence. His plan starts with the goal of gaining power through wealth. To gain wealth, Hamilton stated that industry must be created. He creates a national bank by loosely interpreting the “necessary and proper” (Doc 1) clause. Hamilton justifies his bank by saying, “Necessary often means nothing more than needful…useful” (Doc 2). He believed that the creation of a National Bank fell under this clause as he found it convenient to help with his plan.

By creating the National Bank, he was making the rich richer, and causing them to either invest their money, spend it on products, store it in the bank, or use it to buy bonds. This in turn would give the government more wealth, and ultimately more power. It seemed like a decent idea, but Jefferson saw the flaws that came with it. He stated that Hamilton’s plan would

destroy democracy in America. In Jefferson’s notes on the state of Virginia, he said, “Those who labor in the earth are the chosen people…corruption of morals in the mass of cultivators…” (Doc. 4). When he says this, he is saying that through the creation of industry, workers who work under others will lose their political independence. He saw this as a threat to democracy because workers would be easily manipulated to vote for someone that their employer wanted them to vote for, therefore leading to corruption in the government. And there was no workaround for this as voting was public, so anyone could watch the workers cast their vote. This would eventually lead to an Oligarchy as the rich would have all the power since they were of higher positions, and would control those of lower positions, which would be the workers. That is why Jefferson opposed Hamilton’s financial plan as this would end in the creation of a country who is led by few people with all the power.

In addition, Jefferson was opposed to Hamilton’s interpretation of the government’s powers. Hamilton interpreted the “Necessary and Proper” clause loosely, stating that “Necessary often means nothing more than needful” (Doc. 2). By interpreting the clause this way, he opened himself to an almost unlimited amount of power. He used it to create a National Bank by claiming that it was related to regulating commerce and collecting taxes. Jefferson had been opposed to Hamilton’s interpretation for many reasons. The first one is that he interpreted the Constitution very strictly. He argued that, “Supporters of the bank bill argue that a bank would be of great convenience in collecting taxes. Even is this argument were true, the constitution allows for only those laws which are “necessary”, not for those which are merely convenient for carrying out delegated powers” (Doc. 3). He argued that the constitution was only referring to laws that were absolutely necessary, a last resort with no other possible options. Jefferson backs up his interpretation by also stating, “ … that powers not delegated to the United States by the Constitution, nor prohibited by it to the states, are reserved to the people or the

states…The incorporation of a bank and the powers assumed by this bill have not in my opinion, been delegated by the United States by the Constitution” (Doc. 8). The second reason he interpreted the constitution this way was because if the Constitution were to be interpreted loosely, it would pose a threat towards Slavery. Jefferson had supported slavery, and did not want the government to be able to gain more power through the clause, and in the long run, eventually ending slavery in America. The final reason Jefferson opposed Hamilton’s interpretation was because Hamilton was using his loose interpretation to his advantage, creating a bank to further push his financial plan into motion, which was the exact opposite of what Jefferson wanted as it went against all of his beliefs. Jefferson was trying to stop Hamilton’s plan, and one way was to stop the abuse of the “Necessary and Proper” clause.

Furthermore, Jefferson was against Hamilton’s foreign policy. Hamilton was considered to be Pro-British while Jefferson was Pro-France. During this time, France and Britain were at war fighting against each other. Hamilton supported the British and wanted them to win against the French because he believed in the British’s form of government, a monarchy. A monarchy was a government with one person that holds the sole power of the country. Hamilton’s expectations was that if the British were to win the war, the monarchy form of government would spread all across Europe, and ultimately be adopted in America as an oligarchy form of government, a country ruled by a few. He believed in this type of government because he saw that Britain was flourishing and he thought that if America adopted the same type of government, then the country would succeed as well. Hamilton shared his view on popular rule by stating, “The people are turbulent and changing; they seldom judge or determine right. Give to the first class a distinct, permanent share in the government” (Doc. 6). Hamilton objected to power among the people because he believed that the people are always changing and have ambition.

This creates a state of mind that a common person can never settle on one decision and is always going to change their beliefs. Hamilton also states his disagreement with Jefferson by saying, “In respect to our foreign politic, the views of the gentlemen and his supports are unsound and dangerous. They have a womanish attachment to France, and a womanish resentment against Great Britain” (Doc. 9). Hamilton shows his hate on Jefferson’s views and comments that they are unsound and dangerous. Jefferson on the other hand believed that the government should be a democracy with power shared among all the people. Jefferson supported the French because of multiple reasons.

First, he wanted to honor the treaty between America and France, and help them in the war against the British. Second, he did not want monarchy to spread across Europe as this would diminish his chances of creating a democracy form of government in America. Jefferson expresses his distrust for the government and the elite by saying, “I am not a friend to a very energetic government. It is always oppressive. It places the governors indeed more at ease, at the expense of the people” (Doc. 7). Jefferson believed that the elite would take away the rights of the common people. He trusted that Gentlemen who were small farmers, would rule better as they would be educated, disinterested, independent, and would own land. This was the criteria that Jefferson believed would fit a person to rule the country, and why he disagreed with Hamilton’s foreign policy.

Finally, Hamilton and Jefferson have very different views on the future of America. Hamilton believed that the future of America should yield a Oligarchy government, with the power belonging to the elite. He wanted Britain to ultimately win the war and for America to adopt an Oligarchy government and prosper just like Britain, since he did not trust the power to be in the common peoples’ hands. Additionally, Hamilton sought out to have industry with manufacturing and agriculture. He believed that a strong manufacturing economy was of great importance to America’s future. Hamilton

wrote a report on Manufacturing in which he stated, “The trade of a country which is both manufacturing and agriculture will be more lucrative and prosperous than that of a country which is merely agricultural. The importations of manufactures supplied seem to invariably drain the merely agricultural people of their wealth” (Doc. 5). Hamilton believed that for America to flourish with its economy and eventually pay off its debts, America needed to have industry to start manufacturing its own products and be able to export products and agriculture, not just agriculture. He also thought that in the long run, the agricultural people would be drained of their wealth as manufacturing would take over the economy of America. Jefferson disagreed greatly with Hamilton’s vision for America. Jefferson wanted to have a democracy in America in the future, with power in the hands of small farmers who were Gentlemen. This was a Virtuous Republic. He distrusted the elite to run the government and trusted people who were like him to have the power. Additionally, he did not want industry to become present in America as that would destroy democracy, so he wanted more agriculture to be among the farmers.

To sum up, Jefferson and Hamilton disagreed on a great deal of matters. In the end, it was both Hamilton and Jefferson who won in achieving what they wanted. Nowadays we have a democracy government, but we also have industry and we manufacture goods. We export and import goods to keep our economy in balance. The people have the power now, but it is not just small farmers and gentlemen, but rather equality among all others. 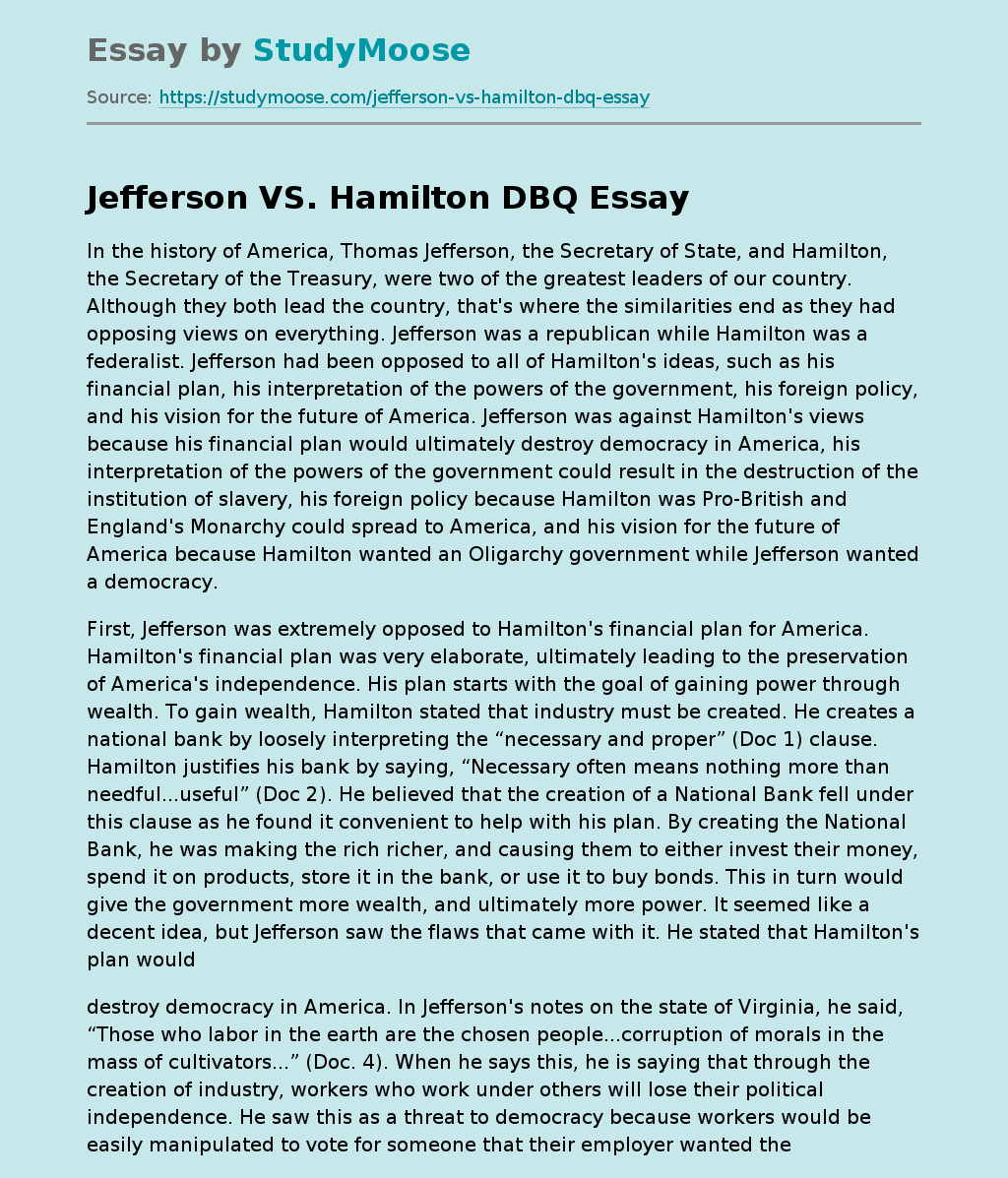