2013 has been embossed by recent incidents such as a Vegas shooting that ended the lives of three people, four gruesome murders in Orange County in California, and many more tragedies. It is estimated that there are 300 million guns in personal hands in the US today, many legally owned and others not (Neyfakh). Every year, close to four million guns find their way into the market (Nicolas and Nelson). This level of gun infiltration is alarming; it means that even the Supreme Court would find it hard to locate or seize these guns.

Don't use plagiarized sources. Get your custom essay on
“ Gun Control Proposal ”
Get custom paper
NEW! smart matching with writer

Gun related violence has caused many to review their stances on the issue. In essence, gun violence is at an all-time high in the United States, as referred to by President Obama in the State of the Union Address; therefore, Unites States government should require criminal background checks for all gun sales, including those by private sellers that currently are exempt. Besides being at the top of Obama’s agenda, gun control is also an issue that has received enormous emphasis in the media.

In his address, the president sought extensive support for comprehensive background checks to buy guns, an interdiction on high-capacity magazines and assault weapons.

According to President Obama, the proposal will diminish the rampant gun violence in the country. This new plan aims to do the following: to seal background check escape routes to keep out guns out of the reach of criminals; to completely ban high-capacity magazines and military assault weapons, as well as other necessary steps to minimize gun violence; to guard schools and other public environments; and to improve access to psychological health services.

Statistics reveal that up to forty-five percent of all households in the US have a gun in their possession (ProQuest Staff). This shows that guns are too easy to access and their abundance in the US ought to concern many Americans. Many of those who advocate for gun control measure want a total ban. They would prefer the United States to become more like her neighbor Canada. There are few guns per capita in Canada and all guns have to be registered with the national government. This approach to the ownership of firearms has many advantages. Most of all, Canada’s rate of firearm homicide is a sixth to that of the US (Nicholas and Nelson).

However, it is useless to argue for the application of the Canadian approach in the United States. Circumstances are extremely different. It is difficult to determine whether, and to what extent, American values and culture can yield to embrace the characteristic benefits derived from Canadian-style gun control. Clearly, Americans should embrace the White House’s resolution to the propagation of gun-related bloodshed in the US. Many voters concur with the president with regards to the proposals, especially on universal background checks and harsher penalties for wrongful gun purchases. The president’s take is synonymous with that of Harry Reid, Senate Majority Leaders, who has a positive rating from the National Rifle Association (NRA). To reiterate his position on the need for gun control measures, the president cited a string of mass shootings, which have happened during his tenure. Those who listened to the State of the Union Address comprised groups of people who had been directly or indirectly affected by gun violence.

Though background checks are required in the US., due to the still-increasing rates of gun violence have proven them to be ineffective because of the various loopholes which put these lethal weapons in the hands of criminals and people who suffer from mental disabilities. With the current method, anytime someone buys a gun from a federally licensed gun dealer, the dealer is required to run a check on the buyer by submitting the name to the federal database. That database consists of criminal records and mental health records as provided by federal and state courts and agencies (Feldmann). Convicted felons and those determined by the courts to be dangerously mentally ill are prohibited by federal law from buying firearms. Also, states have added their own categories of who is prohibited from buying a gun. The downside is that there are loopholes in the current federal background check system.

Forty percent of all firearms purchased in the United States are sold without background checks because the guns aren’t purchased from a federally licensed firearms dealer (Neyfakh). Any purchases that fall under this category are processed without proper background checks. Despite the objections to this proposal, the rate of gun violence is increasing at such a rapid rate that the American people must prioritize in order to help prevent such tragic and avoidable events such as the Sandy Hook Elementary shooting. They must put into perspective which of the following is more important to defend: the prevention of devastating mass shootings that have led to the homicide of over 8,583 people in 2012 through the use of extensive background checks, or the possible violation of citizens privacy (Neyfakh).

This idea is already accepted by over ninety-two percent of Americans, according to a poll taken by the Huffington Post in January 2013*. If an extensive background check on Adam Lanza’s mother-the owner of the guns he used to commit the shootings of twenty-six children and teachers-the government might have been aware that her son, who has autism, may gain access to her military-grade weapons. Any skeptics must put into consideration that more time than not, public safety is more important than personal privacy in regards to gun violence prevention.

In conclusion, universal and extensive background checks may be the single most important gun violence prevention measure that the government could adopt. This plan closes the loopholes which have greatly contributed to the extreme amount of gun violence in the United States. It will prevent criminals and mentally ill people from gaining access to them. Approving this form of background checks is necessary because gun violence is at an all-time high in the United States; therefore, Unites States government should require criminal extensive background checks for all gun sales, including those by private sellers that currently are exempt. Past attempts at preventing this type of violence have been proven to fail due to the various loopholes and the ever-increasing rate of gun-related deaths. It is time for the American people to take action to significantly decrease-and eventually eliminate-gun violence in the United States. 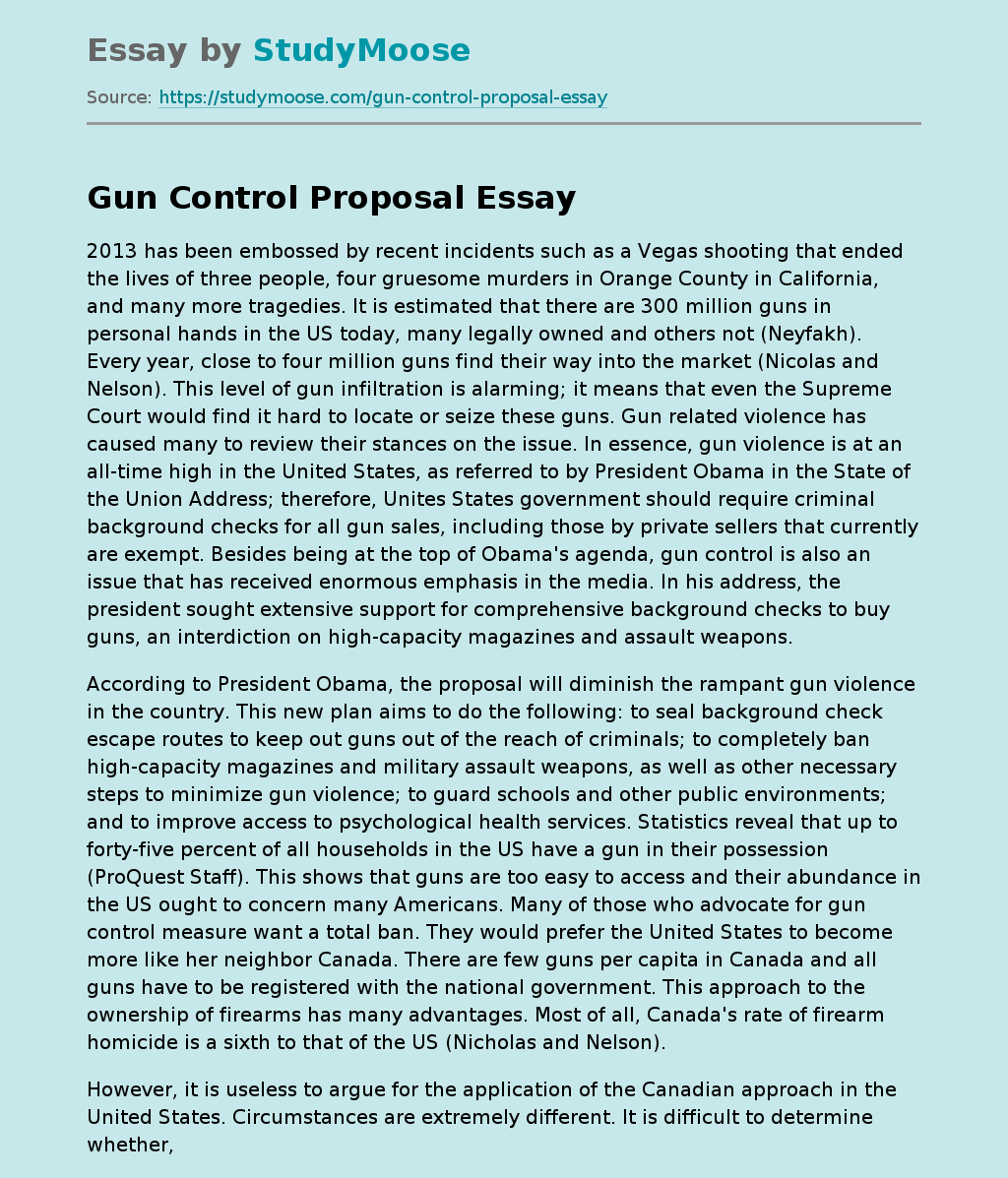