Once upon a time, long ago there was a marvelous battle called the Trojan War, but before hand, there lived a Greek god named Peleus who extracted love for the Sea goddess Thetis. As time passed, they became one, so they thought why not form our love in to a child. When their child was born, Thetis dipped him into the river styx which was in the underworld (Achilles).

Thus made him immortal and his name was Achilles. When Thetis dipped Achilles in to the underworld, she held him from his heel, this spot remained vulnerable, (Achilles).

Don't use plagiarized sources. Get your custom essay on
“ Greek Mythology and Achilles Introduction ”
Get custom paper
NEW! smart matching with writer

Achilles was a great warrior who possessed many unique qualities; for one, he was immortal. He was a man who was known for his incredible strength, fighting ability and his intimidating armor.

Some of his other main qualities were that he was part human, past super natural, (Achilles). He was very courageous, brave, and also strong. He used his strength and bravery to kill Hector, king of the Trojans, (Achilles 1). Achilles was also very well known for his helmet, which was gold with red horse tips above it. His armor would always be recognized in battle.

Achilles had many weapons, but his two main battle pieces were his short sword and spere, (Gill).

When fighting, Achilles showed no mercy. When he killed Hector, king of Troy, he tied Troy’s king to the back of his chariot and dragged his corpse around the city walls for twelve days, (Gill). Achilles is unique, and the qualities he possessed are too.

Achilles was a great man, he seemed perfect, but every great fighter has a weakness and for Achilles it was his heel, (Achilles 1). Although Achilles has weaknesses, that did not stop him from his many achievements that were successful. Prophecies said, “Troy would only win if Achilles was on his side”, (Gill). Achilles was sent to kill Hector in the Trojan Warm so he did and came out successful. Sadly, in the war an arrow that was shot from the brother of Hector, Paris, landed in Achilles’ heel. Being the only vulnerable spot in his body, he died at Troy while still a young man, (Gill).

Conclusion
Achilles was a great leader and always led in battle. He was born and became one of the best fighters ever lived, (Achilles). Achilles was and will be remembered as “A hero with a weakness”, (Achilles 1). He was an immortal man with a great fighting ability, also a leader who showed courage and left his footprint, literally. 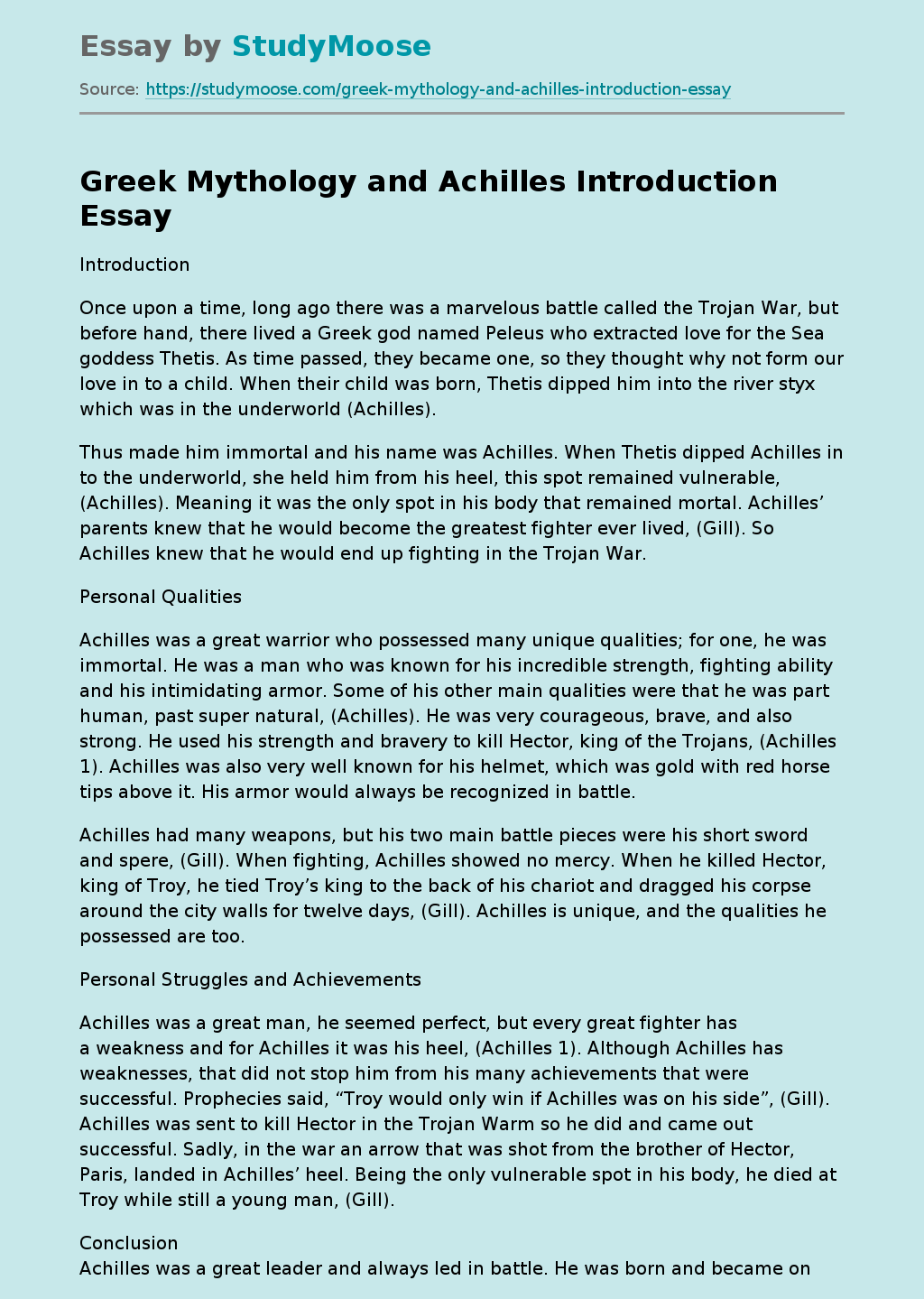