The nature of humanity always forces individuals to choose between right and wrong. Sometimes, there is conflict between personal desires and moral decisions. In the play Macbeth, William Shakespeare illustrates humankind as dark and immoral. He displays the negative side of human nature through three of the main characters. First of all, Banquo who appears to be noble but succumbs to his desires. Secondly, Lady Macbeth reveals ambition that leads her to destruction. Lastly, Macbeth becomes engulfed in greed that leads to horrible deeds.

Don't use plagiarized sources.
Get Your Custom Essay on Greed in Macbeth Just from $13,9/Page

Banquo reveals avariciousness in pursuit of his desires. He reveals his first cupidity when he hears Macbeths prophecies by the weird sisters. Banquo states (AS BANQUO SAYS TO ..): My noble partner/You greet with present grace and great prediction/Of noble having and of royal hope,/That he seems rapt withalspeak then to me, who neither beg nor fear/Your favours nor your hate.

(I,iii,55-62). Banquo, who appears to be a noble man, also displays his greed by wanting to receive a great prediction just like Macbeth. Banquo also reveals his overriding by committing the sin of omission. After the assassination of Duncan, Banquo talks to himself: As the weird women promised:If there come truth from them/As upon thee, Macbeth, their speeches shine/Why, by the verties on thee made good,/May they be my oracles as well/And set me up in hope? (III,i,2-10).

Banquo does not reveal the secret of the prophecies and his suspicion about Macbeth because Banquo believes that his prophecy will not come true if he exposes this secret information. Banquo did not act upon his greed, but his greediness of keeping secrets of the prophecies leads him to his death. Moreover, a promise between Macbeth and Banquo, stops Banquo from exposing their secrets. After hearing the news about their future, Macbeth says to ( ): If you shall cleave to my consent, when tis/It shall make honour for you (II,i,30-31). Since Macbeth promises to honor him, it makes it harder for Banquo to reveal the secret. There are some good qualities but also bad qualities in human nature that leads to a downfall.

In addition to Banquo, Shakespeare illustrates much stronger greed in Lady Macbeth. After hearing the news about the prophecies, Lady Macbeth reveals her imperial ambitions. The raven himself is hoarse/That croaks the fatal entrance of Duncan/Under my battlement. Come, you sprits/That tend on mortal thoughts! Unsex me here,/And fill me from the crown to the toe top full/Of direst cruelty; make thick my blood (I,v,36-41). Through Lady Macbeth, Shakespeare shows the powerful figure of a female character normally recognized as kind and obedient during this time. However, Macbeth ( no underline) presents a dark image of a female character that becomes evil in her desires for the future. Furthermore, Lady Macbeth convinces her husband to act upon his desire and his fate. As she knows Macbeth does not have the will to actively pursue the throne, she manipulates him: Was the hope drunkFrom this time/Such I account thy love.

Art thou afeard/To be the same in thine own act and valour/As thou esteemst the ornament of life,/And live a coward in thine own esteem,/Letting I dare not wait upon I would,/Like the poor cat I the adage? (I,vii,35-44). Not only does Lady Macbeth carry out her own role, she also goads Macbeth into action to accomplish her desire. Lady Macbeths natural humanity is displayed when she is not able to kill Duncan herself because he resembles her father. This illustrates that she is trying to suppress her human nature and allow her ambition to rule.

However, even after reaching her achieved goal, she is discontent throughout the rest of the play. Lady Macbeth expresses her feelings, but not to Macbeth: Noughts had, alls spent./Where our desire is got without content:/Tis safter to be that which we destroy/Than by destruction, dwell in doubtful joy./[Macbeth enters]why do you keep alone,/Of sorriest fancies your companions making;whats done is done. (III,ii,6-14). Even with her dissatisfaction, she keeps her emotion herself in order to keep her throne. The greed in human nature is so strong that it can overtake morality.

Finally, and for the most significantly, Lady Macbeth encourages Macbeth to act upon his greed, and abandon his morals. Shakespeare illustrates Macbeth as evil from the beginning of the play. In his first entrance, he expresses his feelings of the day by saying: So foul and fair a day I have not seen. (I,iii,39). Since Macbeth believes that good is bad and bad is good, his ambition overtakes his virtuousness. Therefore, Shakespeare illustrates that humans can exemplify both good and evil. In addition, Macbeth reveals his desire to kill King Duncan when he is left alone in his chamber. I have not spur/To prick the sides of my intent, but only/Vaulting ambition, which oerleaps itself/And falls on the other. (I,vii,25-28). Macbeths values are shown through his speech as he expresses abhorrence for killing Duncan.

Lady Macbeth convinces her husband which leads him to act upon his deed. Later, Macbeth kills Banquo because of acquisitiveness. Macbeth feels insecure because of Banquos prophecies: When first they put the name of king upon me,/And bade them speak to him; then prophet-like/They haild his father to a line of kings:/Upon my head they placed a fruitless crown,/And put a barren scepter in my gripe,/Thence to be when chd with an unlined hand,/No son of mine succeeding. (III,i,62-68). Macbeth betrays his friendship because he believes that he had committed a horrible deed not for his descendants, but for Banquos. Even though Banquo had been so kind and loyal to him, Macbeth kills him to prevent Banquos son from gaining the throne he has killed for. When once greed overrules humanity, it will continue to control and force them to make rash decisions.

Throughout the play, Shakespeare presents a dark side of human nature, with greed and ambition overcoming morality. First, by exemplifying Banquos avarice in order for his heirs to inherit the throne, Shakespeare establishes immorality through omission. Secondly, Lady Macbeths ambition overtakes her, and instead of supporting her husband, she pushes him to evil. Finally, Macbeth allows his goal and desires to control his life and lead him to a betrayal of Duncan, Banquo, and his own morality. 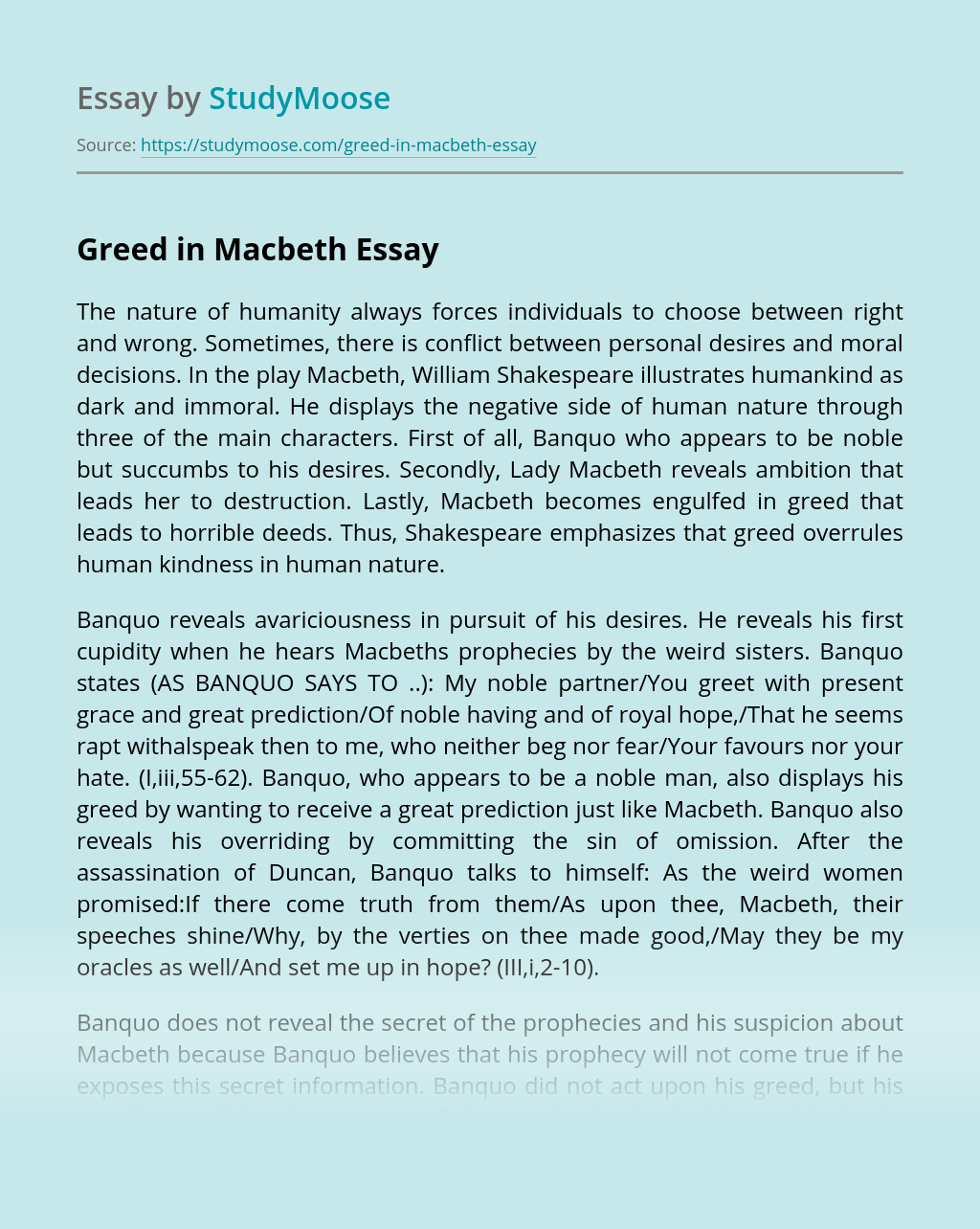 Sinners in the Hands of an Angry God

Rate this post 1. Introduction a. Hook – “Unconverted men walk over the pit of hell on a rotten covering.” ( A quote from Jonathan Edwards’ “Sinners in the Hands of an Angry God”) b. Thesis – Jonathan Edwards’s sermon portrayed Puritans as sinners of their religion through the use of rhetorical strategies such as...

Justice is a theme of all great literature

Rate this post Justice comes from actions and decisions being balanced, in that when someone does a good thing, they are rewarded, and when they do something bad, they are punished. It is the gods’ primary role to hand out justice and make sure everybody is treated fairly. This theme appears immediately in the Odyssey,...

Rate this post Rene Descartes was a French Mathematician and a modern Philosopher who developed an original philosophy based on sciences aimed at being stable and likely to last. His method was based upon premises of senses, reason, doubt and belief. Like most philosophers his quest was for Truth and knowledge. However the nature of...

Influence of Women in The Great Gatsby

Rate this post Though the Great Gatsby is a male dominated book, there are a few women who have great influences. Daisy Buchannan is the main female character, having romantic relations with both Tom Buchanan and Jay Gatsby. Myrtle Wilson is a woman who is married to a hardworking man, but she remained unfaithful throughout...

Rate this post  Jose Rizal, our national hero was one of the Filipinos who asked for reformsduring the Spanish era. This was one of his best contributions in building our nation. These reforms will grant the ultimate dream of the reformists; assimilation. Filipinoswill be given the rights that they deserve. Rizal choose to seek for...