Greed and Power in Macbeth

Her plans work with remarkable effectiveness, overriding all his objections and questioning his manhood when he hesitates to murder, until he feels he has to commit murder to prove himself. It is her deep-seated ambition, rather than her husband’s that ultimately propels the plot of the play by goading Macbeth to murder Duncan. The Witches prophecy is also a sole cause in the tragedy because it fuels Macbeth’s ambition and gives him an overwhelming desire for power.

We first hear of Macbeth as a brave and capable warrior (from the Bloody Captain).

However after meeting with the witches we can see that he has consuming ambition and a tendency to self-doubt. This is shown after he is prophesised to be King by the Three Witches. The prediction that he is going to be King brings him great joy but also inner turmoil as he imagines himself killing Duncan. Macbeth’s ambition is powerful and he does not need any help coming up with the idea of murdering Duncan, but it seems unlikely that he would have committed the murder without his wife’s powerful taunts and persuasions.

Before he kills Duncan, Macbeth is plagued by worry and almost aborts the crime. It takes Lady Macbeth’s steely sense of purpose to push him into the deed. However desperate he is for that crown he would not have murdered Duncan. This suggests that unlike Lady Macbeth, he has a conscience. And this comes to trouble him along with uncontrollable guilt after murdering Duncan. Lady Macbeth is stronger, more ruthless and more ambitious than her husband.

After reading the letter sent to her by Macbeth she is already plotting Duncan’s murder. She is convinced that he is too moral to commit the murder, saying that he is “too full o’ th’ milk of human kindness”. .At one point she wishes that she were not a woman so that she could do it herself. Even her husband implies that she is a masculine soul inhabiting a female body. Although she appears to hold herself together after the murder and steadies her husband’s nerves immediately after the rime has been perpetrated, saying “what’s done, is done. ” and merely trying to treat Macbeth’s guilty hallucinations with the blandest possible palliative. Afterwards however she begins a slow slide into madness. As she sleepwalks she mutters, as if to Macbeth, “What’s done cannot be undone”. Just as ambition affects her more strongly than Macbeth before the crime, so does guilt plague her more strongly afterward. She has been reduced to sleepwalking through the castle, desperately trying to wash away an invisible bloodstain.

Once the guilt truly gets to her she commits suicide showing her inability to deal with their past crimes The Three Witches lurk like dark thoughts and unconscious temptations to evil. Their mischief is a combination of two things- their supernatural powers and their ability to understand the weakness of their targets—they play upon Macbeth’s ambition like puppeteers. Despite the absurdity of their “eye of newt and toe of frog” recipes, they are clearly the most dangerous characters in the play, being immensely powerful and extremely wicked.

The prediction (if it is a prediction) they tell Macbeth compels him to ponder on killing his King. Macbeth kills many thinking that he is invincible because the witches said that Macbeth can’t be killed unless that man is born of a woman. When Birnam Wood moves to Dunsinane, Macbeth knows that he is going to be killed. The Witches prophecy, along with Lady Macbeth’s ruthlessness and ambition are the causes for the tragedy. Macbeth shows us that too much ambition and thirst for power will lead to your ultimate destruction.

Greed and Power in Macbeth. (2016, Sep 10). Retrieved from http://studymoose.com/greed-and-power-in-macbeth-essay 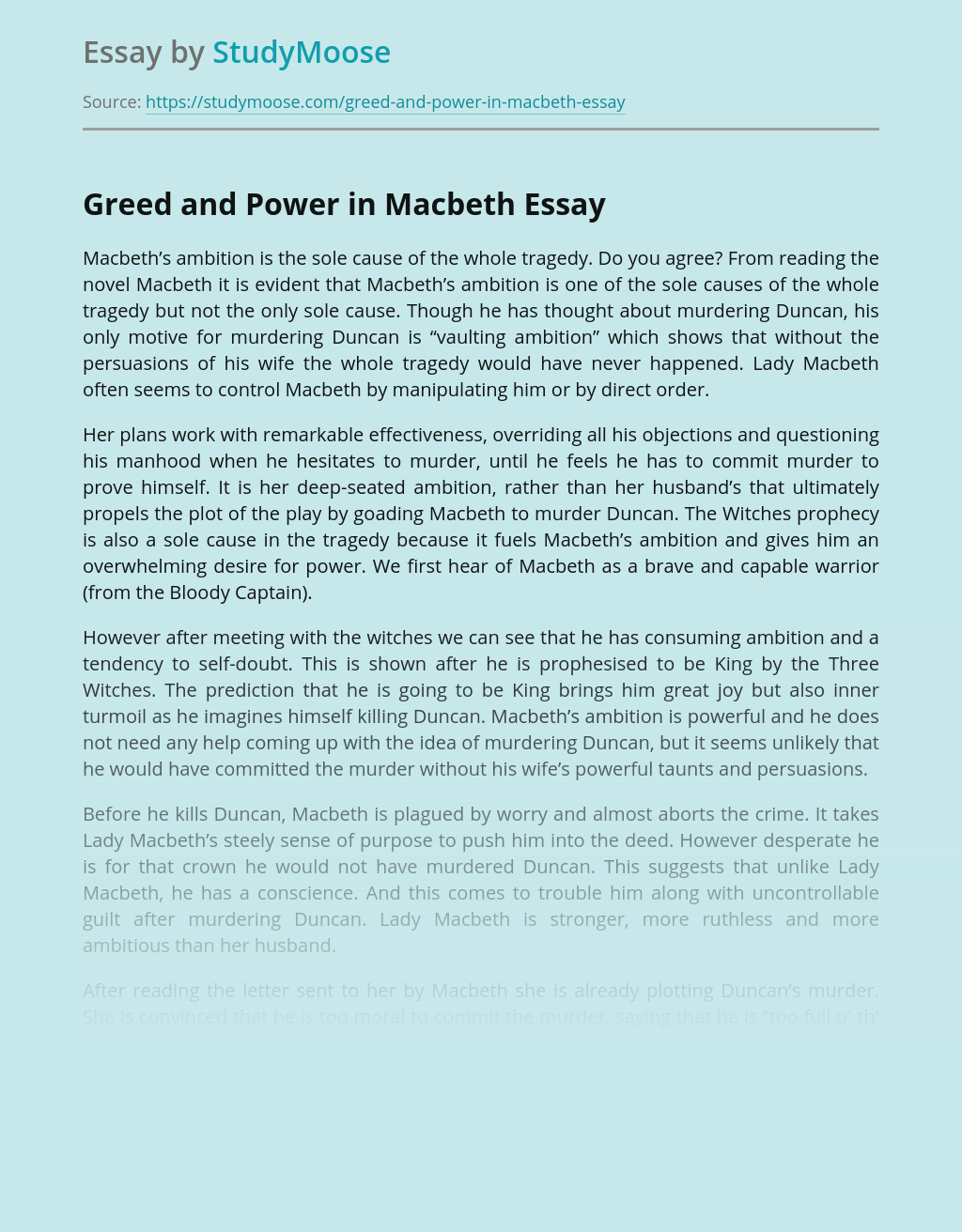 Don’t waste time
Get a verified expert to help you with Greed and Power in Macbeth
Hire verified expert
$35.80 for a 2-page paper
Stay Safe, Stay Original