When the youngest leaves, his mind was able to devise an evil plan caused by greed.

His selfishness caused him to do the following, And deftly poured the poison into two. He kept the third one clean, as well he might, For his own drink, meaning to work all night(Chaucer 217-218). The youngest was tempted by greed to commit an evil action.

Chaucer wanted the reader to realize money and greed are problems with society. They cause people to commit evil acts. Killing someone for money shows Chaucer wanted one to read this tale and recognize the problems of greed.

The Characters are essential to this tale also. Chaucer displays death as a character giving him human traits and personifying him. This personification of death adds a sense of doom and gives a slight fear. Death adds these qualities because dying is like a journey to the unknown, and it naturally scares people to think about it.

When Chaucer writes, There came a privy thief, they call him Death, Who kills us all round here(Chaucer 15-16) he attempts to add a sense of fear and terror by saying there is a person who goes around and kills everyone. It is far scarier then using death as a thing that happens instead of using death as a person. Chaucers personification of death improved the story by creating suspense, and terror.

The plot of the story is the most important, and uses irony to gives entertainment. The three men went looking for death, and find it to be a heap of gold. The irony of this was that the characters ended up getting killed themselves and on their search for death they met their own death, which was the heap of gold. This ironic occurrence is almost comedic when all three men plan to kill one another and all three men succeed in doing this. Chaucer writes Thus these two murderers received their due, so did the treacherous young poisoner too.(Chaucer 237-238). The irony here also criticizes greed in humans. It makes fun of the fact that greed really is the root of all evil. Chaucer created this irony for both entertainment and to make a point about greed.

In conclusion Chaucer wrote his story with the theme greed is the root of all evil (Bible) and used the literary elements of plot, moral, and characters to achieve this. Chaucer struck fear and added suspense when he personified death. Without personifying death Chaucers story would have been less exciting. Chaucer was ironic with his plot and those who were looking for death found it. This comedic addition also criticized humans and their tendency to be greedy. Chaucer was successful in creating a story which explained how greed is the root of all evil(Bible). 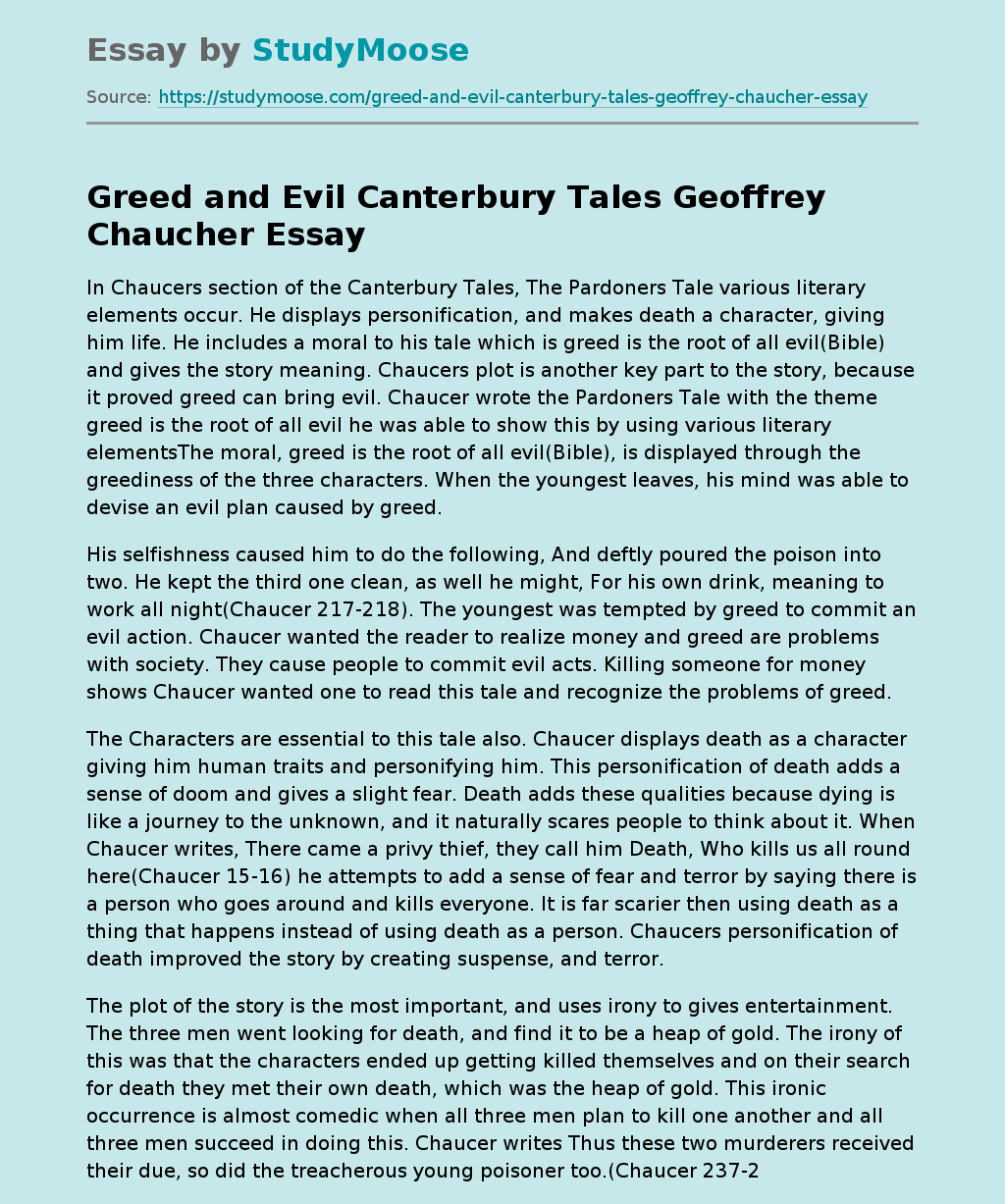