Of all of the tales that are told by the pilgrims in The Canterbury Tales, one of the most satisfying is that of the rioters related by the Pardoner. In recounting the exemplum of three young sinners out to destroy Death, the author uses many different elements to draw in his audience. The mysterious atmosphere of the tale, the dramatic tension created by the length and speed of the narrative and the use of irony in both the telling of the tale and in the tale itself all have the combined effect of fascinate the readers and ensuring that the moral of the tale is heard.

Don't use plagiarized sources. Get your custom essay on
“ The Pardoner’s Tale ”
Get custom paper
NEW! smart matching with writer

The Pardoner is a master story-teller

While not necessarily the most likeable of all the pilgrims, the Pardoner is a master story-teller who uses every available means to captivate an satisfy his audience. One important element that makes the Pardoner’s Tale so intriguing is the atmosphere of the story. The reader is never quite sure whether the events described are taking place in the domain of reality or fantasy.

This confusion starts with the Pardoner himself, an extremely bizarre character both physically and mentally. Described very effeminately in the General Prologue as a “gelding or a mare” (693) with no beard, long blonde hair and the finest clothing.

He is an admitted hypocrite and sinner, who goes back and forth between what seems like true sincerity and pure salesmanship. This is obviously not a realistic characterization, but rather an exaggeration that helps to create a sense of fantasy.

At the very at the beginning of the tale, the Pardoner interrupts the fictional story with a nearly 200-line diatribe regarding the evils of various sins. Right away, the line between fiction and reality is blurred. This line almost totally disappears, as the tale progresses, told mostly through the dialogue of the three drunken rioters.

Told by a servant of the “privee theef men clepeth Deeth” (347), the rioters immediately accept the child’s literal translation of his mother’s warning, and go out to hunt down the elusive figure. Along the way, they routinely confuse fantasy for reality and vice versa. This is demonstrated not only by their embodiment of Death, but also by their accusations towards the old man: “Have heer my trouthe, as thou art his aspye, / Tel wher he is, or thou shalt it abye, / By God, and by the holy sacrement! For soothly thou art oon of his assent / To sleen us yonge folk, thou false theef! ” (426-430).

To them, it seems quite logical that figures from each realm could travel back and forth between reality and fantasy. By extension, it becomes logical to the reader as well. This plausibility stems in part from the fact that the events of the story can be accounted for rationally. Given their inebriated state, it is understandable how the young men could mistake the idea of death for a real entity.

The old man, being described quite strangely, “al forwrapped save [his] face” (390), could also provoke some suspicions. The treasure under the tree is hardly a supernatural phenomenon, and the final outcome of the tale can be explained psychologically. When these ‘rational’ elements are mixed with some other, more fantastical elements, the reader becomes less sure of where the line between the two realms should be drawn. This disturbing atmosphere captures the reader’s attention and draws them further into the story.

Another element that makes the Pardoner’s Tale such a satisfying story is the dramatic tension brought about by both the length and the speed of the narrative. Unlike many of the other pilgrims’ stories, the majority of the Pardoner’s Tale is told through direct dialogue between the characters. This has a very theatrical effect, which both creates interest for the reader and permits the story to progress rapidly. Because of its relatively small presence in the tale, the actual narrative becomes all the more fascinating when present.

The quick pace of the story is emphasized not only through the use of dialogue, but also through the sentence structure; the Pardoner uses very short and choppy phrases in his narrative, as shown on line 223: “O dronke man, disfigured is thy face, / Sour is thy breeth, foul artow to embrace”. There are no transitional paragraphs to speak of, he simply moves from one scene to the next, giving the impression of having memorized the sermon; he has repeated this tale many times before. The speed of the narrative is deliberate; the Pardoner wishes to convince his audience by the powerfulness of his sermon, not by the depth of his arguments.

This reinforces the irony of the tale, in that the pace is so rapid the reader cannot dwell on the hypocrisy of the message. The movement of the story progresses steadily to the climax, which is finished in 10 lines (550-560). All the details are taken care of earlier in the preceding action and dialogue; the author has prepared the reader for the inevitable conclusion of the tale in order that the final action can come swiftly and powerfully. By telling the tale through dialogue and a quick narrative, the Pardoner ensures that his audience is captivated by his story, and vulnerable to his schemes.

The most compelling elements of the Pardoner’s Tale

One of the most compelling elements of the Pardoner’s Tale is the dramatic irony that permeates the entire story. This is apparent almost immediately during the prologue, when the Pardoner, already a questionable figure, openly admits to personifying all of the sins he preaches against. This confession does not diminish the emotional effect this irony creates in the reader; in fact, it only serves to highlight the author’s brazenness. The very purpose of the exemplum, to moralize and preach against sin, is perverted by the Pardoner’s greed, a fact lost neither on him nor on his audience.

Once the tale itself begins, the irony continues through the self-revelatory character of the old man. In Chaucer’s time, old age was associated with wisdom and morality, both of which are embodied by this ancient figure who advises and blesses the young rioters (411-420). On the surface, this character seems to be diametrically opposite the author; one being the living incarnation of all that the other can only speak of. Upon closer inspection, however, it becomes apparent that the old man is actually a fictional manifestation of the Pardoner.

As described in the tale, the old man looks like death: “Lo, how I vanish, flesh, and blood, and skin! / Allas, whan shul my bones been at reste? ” (404-405). He is the physical representation of a reality he can never possess; he can lead others to find what he himself can only search for. This is quite like the Pardoner, who represents freedom from sin for all but himself. While the description of the old man is probably the best developed in the story, it is Death who is given the most complex persona, who is hunted by the rioters, and yet who has the final say.

The fact that all of the other characters are anonymous

The fact that all of the other characters are anonymous just reinforces the striking irony that the only character to be named, and in essence to be truly alive, is Death. To further enhance the irony, the Pardoner introduces the symbolic Eucharist at the end of the story. In Catholicism, the bread and wine consumed during mass is transubstantiated into the blood and body of Christ. While the food remains in its natural form and appearance, its essence is transformed, allowing the faithful to live through the sacrifice of Christ1.

Unfortunately, this is completely opposite to what actually happens, as the bread and wine instead bring death to the rioters. While this symbolism contributes significantly to the mystique of the tale, it also helps to emphasize the irony that the young men find Death only once they stop looking for it. The Pardoner uses irony to create an emotional effect on the reader, in order to draw them more fully into the story. The tale told to the pilgrims by the Pardoner is one of the most enjoyable in all of The Canterbury Tales.

This is due to many elements, but mainly to the ability of the Pardoner to captivate his audience with his story. By creating a mystical atmosphere in which the line between reality and fantasy is blurred, the author forces the reader to put aside any notions of ‘known’ morality in order to better accept the version he professes. The speed and length of the narrative also helps in this regard, ensuring that the audience is so swept up in the pace of the story that they have no time to question the intentions or the truthfulness of the speaker.

This speed also has the effect of dramatizing the tale, making the entire experience more exciting and enjoyable. The extreme irony present in the story is another important element, used to create emotional ties, whether positive or not, to both the tale and the teller. In all three examples, the goal remains the same: draw the readers as fully into the story as possible, in hopes of drawing out their ‘appreciation’ at the end. In any case, the effect of the combination of all the elements is a very satisfying and enjoyable short narrative. 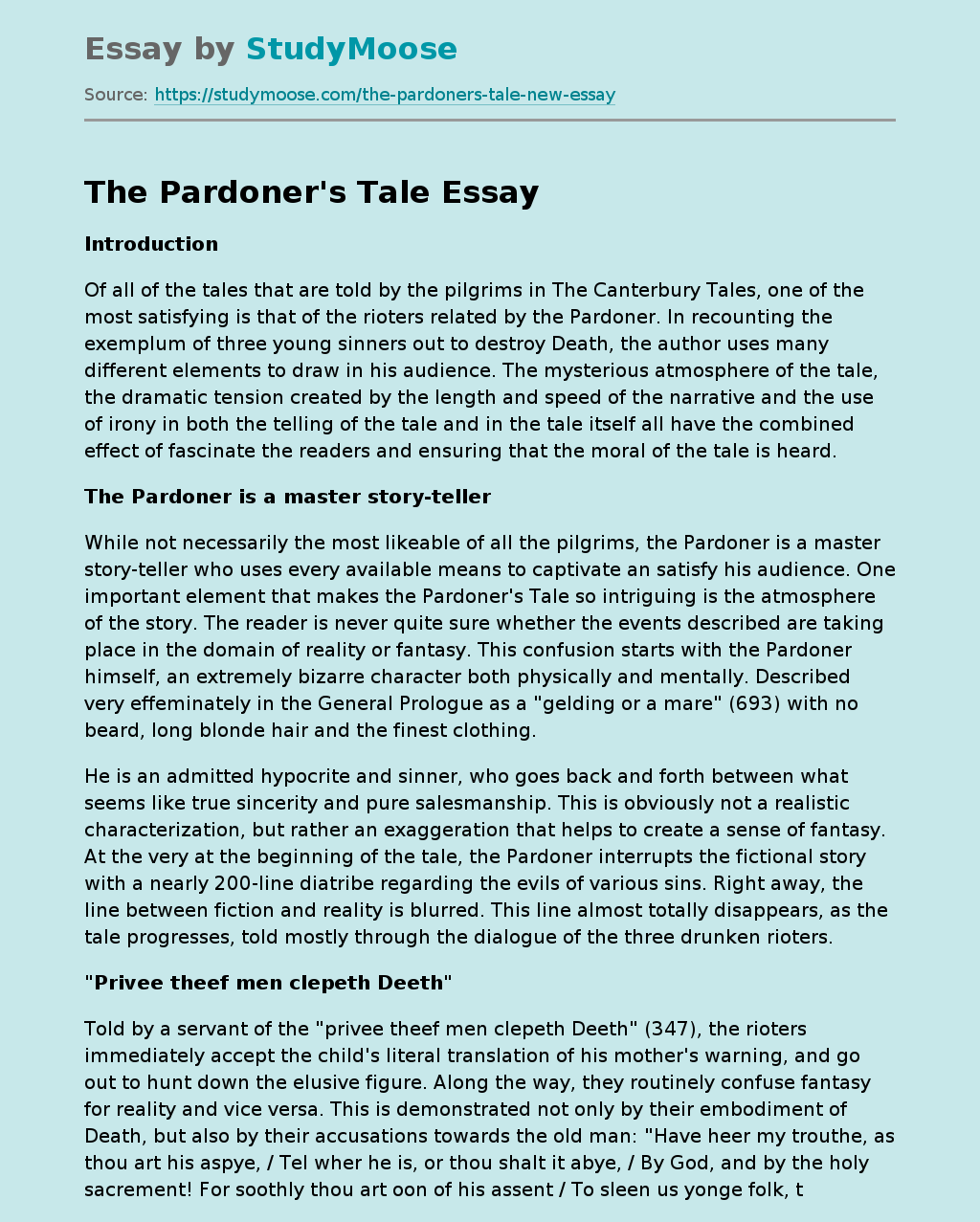