The Pardoner’s Tale: Review and Assess

1. Were you surprised by the fate of the rioters? Why or why not?

I was not surprised by the fate of rioters because this is an anecdote from which we should learn a lesson, and I knew from the beginning that the Pardoner is preaching against greed and the horrible things that come from it. 2. A) When the story opens, what are the rioters doing, and what captures their attention? When the story opens, the rioters are drinking in a tavern.

Don't use plagiarized sources. Get your custom essay on
“ The Pardoner’s Tale: Review and Assess ”
Get custom paper
NEW! smart matching with writer

A passing funeral captures their attention, and they want to know who died and why.

B) What sort of people are they? Explain how you know.

The rioters are rowdy young men looking for trouble, and who have no respect for their elders. I can tell because they are drinking early in the morning, looking to kill death, and are very rude to the old man they encounter. 3. A) What pledge do the rioters make to one another?

The rioters pledge to protect one another as if they are brothers by blood.

B) Do the rioters try to keep that pledge? Explain.

The rioters don’t try to protect each other. At the first chance they get (to profit themselves separately) they plot against each other. The two older men plan to stab the younger so they can split the gold, and the youngest plans to poison the older men so he can have it all for himself. 4. A) What do the rioters find under the tree?

The rioters found a pile of florins (gold) under the tree.

B) The old man has said that death is under the tree. In what sense is his statement accurate?

The young rioter is lying because he intends to kill his human “friends”, who are obviously not actually animals; but he is also telling the truth because the older rioter’s personalities are like those of rats and skunks, which are associated with evil and impurity. 6. The Pardoner is quite open about the manipulative use to which he puts the tale. Do the Pardoner’s reasons for telling the story detract from its moral truth? Explain. I do not believe that the Pardoner’s manipulative ways diminish the moral truth of the story. Of course, since it is coming from such a vile man, it’s hard to try to take any moral perspective from it, but if it were told from any other person, I would see the moral truth about not being greedy.

The Pardoner’s Tale: Review and Assess. (2016, Nov 22). Retrieved from https://studymoose.com/the-pardoners-tale-review-and-assess-essay 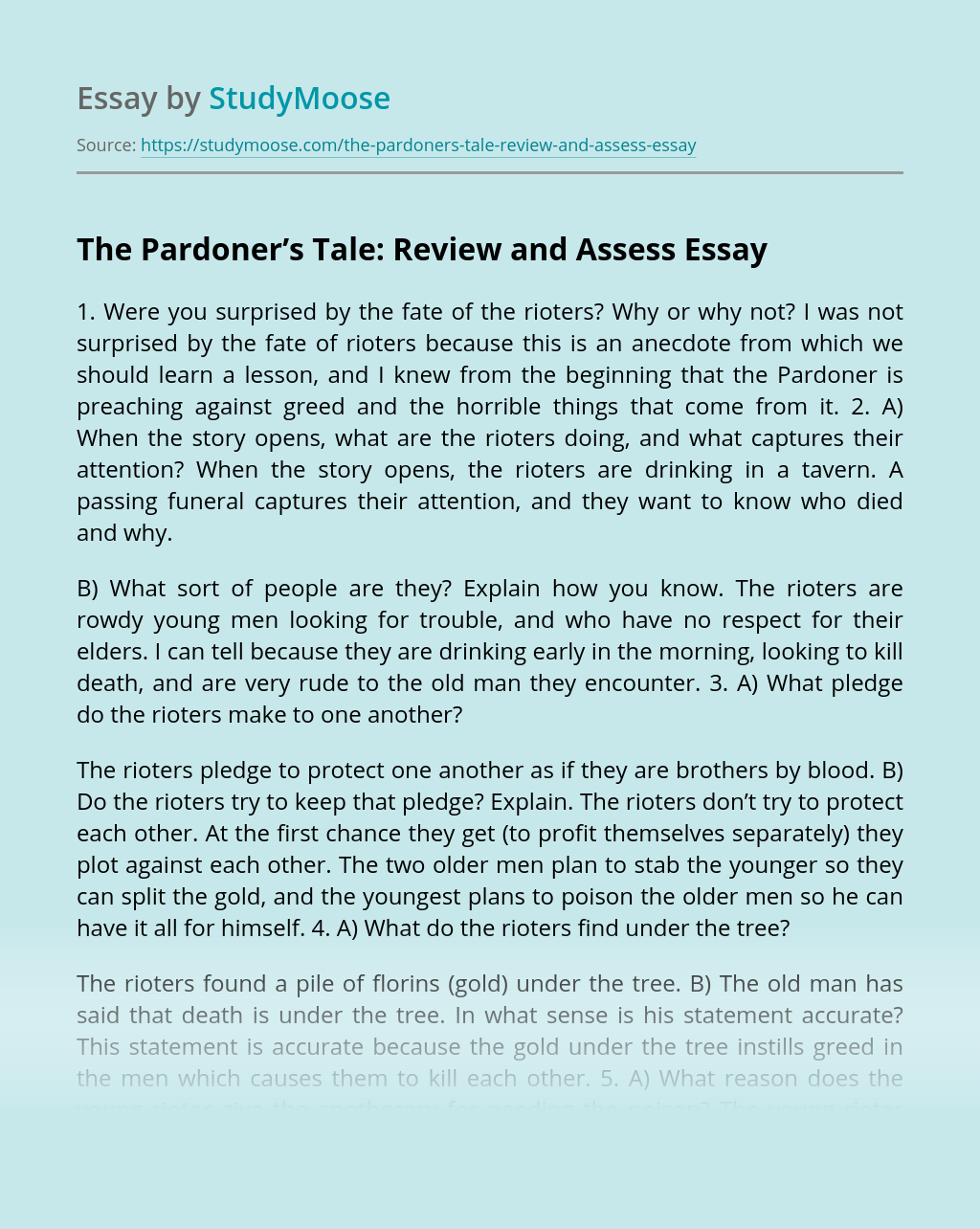