The government which consists of federal, state and local combined has many important roles in the U.S healthcare system. One of the roles in which the government provides is finance. It is estimated that 48% of healthcare was paid for by public dollars in 2008, which included Medicare, Medicaid, state and local health programs, CHIP, and Departments of Defense and Veterans Affairs (Yesalis,Holt,& Politzer,2012). Federal and State governments jointly fund Medicaid, long term mental health services, community health centers and public health programs.

Don't use plagiarized sources.
Get Your Custom Essay on Government Roles in Healthcare Just from $13,9/Page

The Indian Health Service is another program which is run by the federal government that offers healthcare to American Indians as well.

The government also has the role of regulating healthcare. One of the things that the federal government regulates is Medicare and Medicaid providers. State governments are usually more involved when it comes to regulation of healthcare. They regulate things such as: establishing health codes, regulating the insurance industry, and license health care personnel and facilities. The state government works alongside with local health departments to perform other functions as well. Some examples of these are vital statistics, mental health services, and environmental health. 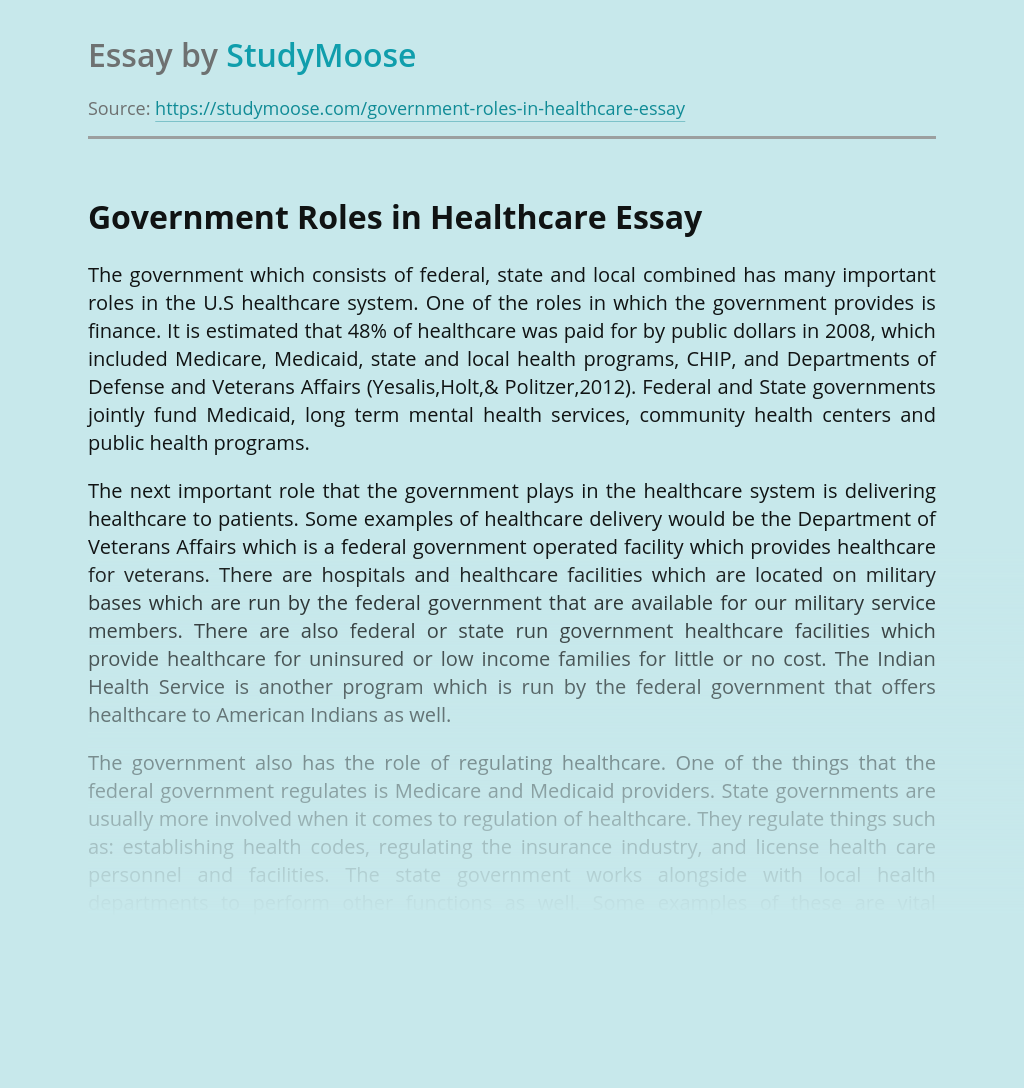 Ah, money. The grease that moves America. The love of which has perhaps caused more human anguish than perhaps any other object with the possible exception of abuse of the Bible, Torah or Koran by religious extremists. Money can’t buy health. All the money in the world can’t undo the damage caused by smoking, drug...

View sample
Anatomy and Physiology for Health and Social Care

Objectives: The purpose of the study was to assess the factors affecting prevalence of self- medication practices using commercial drugs of the Rural Filipino Family including its correlation and who among them experienced non therapeutic effect. Methods: This study was a descriptive cross- sectional question based study. The study was conducted in 3 rural, agricultural...

View sample
McDonald's vs Burger King: Which is Healthier

McDonald’s vs. Burger King: Which Menu Is Healthier? September 15, 2013 COM 155 The United States has the largest fast food industry in the world, and American fast food restaurants are in over 100 countries. That alone tells you that millions of consumers partake in fast food. By definition, fast food is food that can...

View sample
PROMOTE THE HEALTH AND PHYSICAL DEVELOPMENT OF CHILDREN

How you adapt your practice to meet the health and physical development needs of children, taking into account age, gender, ethnicities, individual needs and abilities In my setting I help to promote children’s health and physical development through daily routines and activities. In all my activities I have in mind that children are individual. I...