Water is the most important symbol in Tim O’Brien’s novel Going After Cacciato. For the main character, Paul Berlin, water had always been a positive constant in his life. He grew up along the Des Moines River and for him water represented peace, calm and safety. But, in Vietnam water begins to take on a new meaning. Although Berlin desperately clings to his idea of water as a constructive force, in Vietnam his world is upended and water is no longer benevolent, it is something to be related with malevolence.

Don't use plagiarized sources. Get your custom essay on
“ “Going After Cacciato” Critical Argument ”
Get custom paper
NEW! smart matching with writer

It is obvious throughout Going After Cacciato that water as a symbol has many positive connotations for Paul Berlin. In his mind water is a safe haven from the chaos of the world. After Buff is killed and his head is blown off Paul descends into a haven away from the atrocities of war. “Eyes closed, Paul Berlin pretended he was at the bottom of a chlorinated pool. Pressing silence on his ears, breathing through a snorkel, fuzzy green images swimming in his head…He pretended he was deep in a green pool in summertime” (O’Brien 280.

) He can regain some peace deep in a memory of a summer adventure in a swimming pool. It is a way for him to avoid the horrendous truth of the present.

Even on marches Berlin searches subconsciously for some sort of water nearby. It is a mooring for him, a way to orient him in a foreign land. “He sat with his back to the river, deep in his hole, glad to have water behind him.

Sure, the silence was scary, but even so he could not imagine dying beside a river” (O’Brien 108.) The water behind him is as solid for him as a bunker. He cannot reconcile his positive views of water with the idea that death could occur in such a peaceful place. On the march to find Cacciato the stream beside the unit acts as a guide, carefully delivering them to their quarry. “It was soothing to climb and listen to the rush of the water, imagining from the change in sounds how the stream would be breaking over rock, or curving, or slowing at a level spot, or tumbling down to a deep pool” (O’Brien 108.) Even on a dangerous mission in enemy territory Paul Berlin can retain some sense of calm and remove himself from the ever present threat of death.

It is no coincidence that his imaginings of their march to Paris take place at an observation post next to the sea. The sea is not only a calming, benevolent presence it is also a source for imagination. Gazing out over the seemingly endless expanse of the ocean Berlin’s mind can race across its surface and feed his imagination on the mysteries that grow there. Next to the sea he feels calm and unafraid watching the waves come in “one draped evenly over the next, spreading themselves out with the calm repetitive motion of energy given and energy returned” (O’Brien 63.)

But the lunacy and horror of the war in Vietnam cannot let such a harmless memory and symbol remain unscarred. Instead the war will upset Berlin’s world and make him question everything he believes is true and good. After one battle water can no longer be seen in such an optimistic light. “They found bomb craters full of the dead…then, late in the morning, it rained. The craters filled with gray water. It rained that day and the next day. On the third day, still raining, the craters were high with water, and the charred bodies of the dead bobbed to the surface, bloated now. It was then that Doc Peret named it Lake Country” (O’Brien 177-178.) This image of water is the one that pervades Paul Berlin’s mind. He tries to reconcile it with his life-long assertion that water is a powerful yet positive force, but cannot. He cannot see water as a life source because “everything in Lake Country was dead” (O’Brien 238.)

Water serves as an important motif for how the Vietnam War overturned accepted views and wreaked havoc on anything that made the men feel safe. Paul Berlin clung to water as a symbol of safety and calm until his experience in “Lake Country” irrevocably links water with death. With this motif O’Brien reveals a small piece of the truth about war. It will challenge everything you held true and maim anything you hold dear. 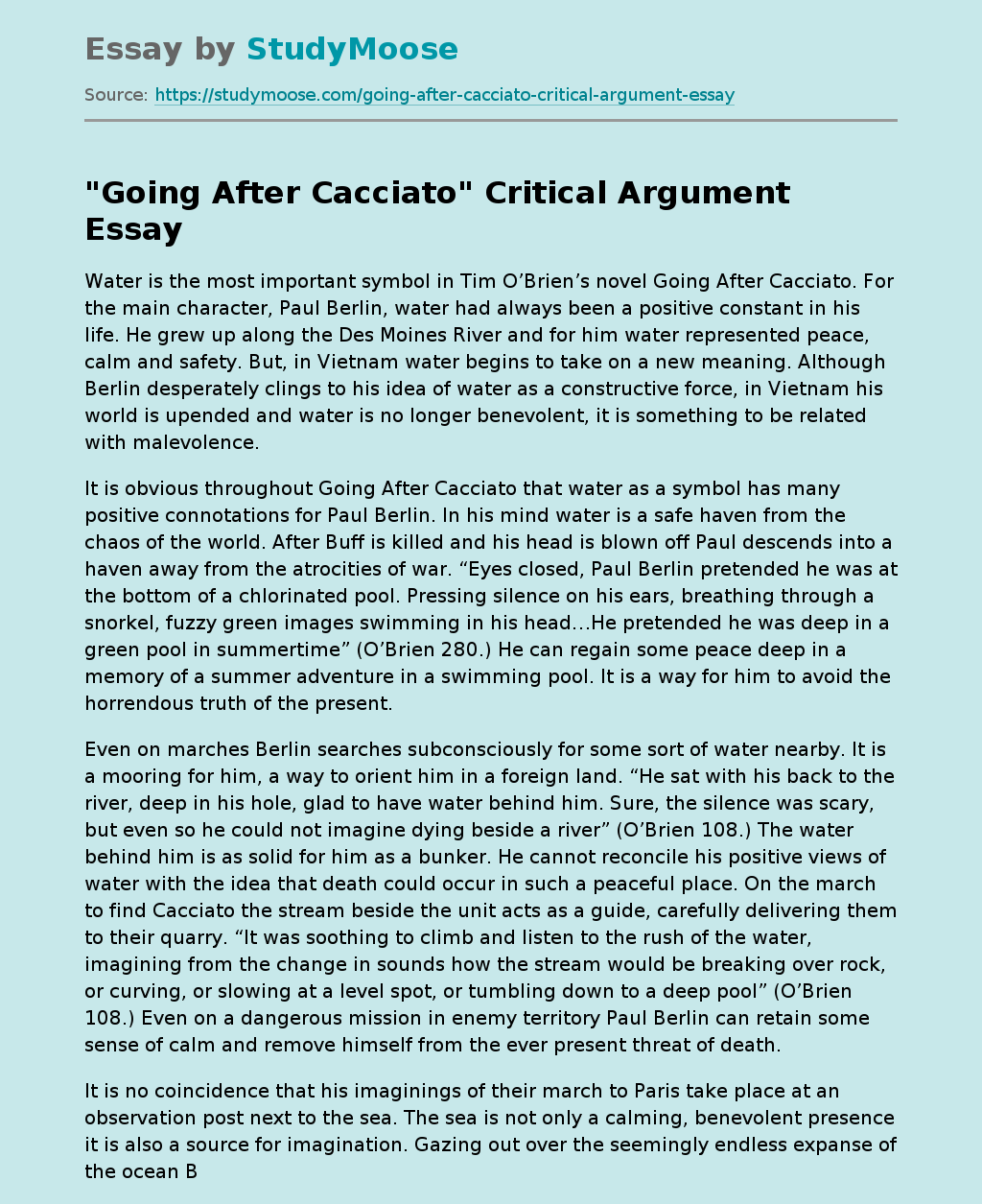