Nelson Mandela gave a speech at his inauguration as president of the Democratic Republic of South Africa on May 10, 1994. His speech is named “Glory and Hope”, which hints at the content of it. In “Glory and Hope”, Nelson Mandela expresses his gratitude towards those who had aided them thus far and reminds everybody of the hardships they suffered, their successes, and their goals for the future. Mandela also tries to communicate the message that cooperation had brought them hope and to their glory and hopes to continue to do so.

Don't use plagiarized sources. Get your custom essay on
“ “Glory and Hope” by Nelson Mandela Analysis ”
Get custom paper
NEW! smart matching with writer

He conveys his appreciation and message through his word choice, tone, sentence structure, and use of rhetorical devices. Nelson Mandela’s word choice helps him convey his gratitude towards the audience and message that they must continue to work together to build and better society. He begins by addressing his audience with “Your Majesties, Your Highnesses, Distinguished Guests, Comrades and Friends”. His audience comprised kings, queens, important government officials, and so on.

However, through his word choice, Mandela is able to bring a sense of belonging and togetherness, regardless of their race, age, gender, and position. He uses words like “compatriots”, “we”, and “us”, making the audience feel and realize that they are all human beings and therefore equals in such a sense. Mandela uses tone and sentence structure to communicate his main message and express how thankful he is. His tone is appreciative, formal, hopeful, and passionate. Mandela constantly expresses his thanks to those who aided them. Near the end of the speech, he is also hopeful and passionate about their newfound freedom, equality, and democratic government.

Mandela says “We are both humbled and elevated by the honour and privilege that you, the people of South Africa, have bestowed on us, as the first President of a united, democratic, non-racial and non-sexist South Africa, to lead our country of the valley of darkness.”

While Mandela’s tone is appreciative, hopeful, and passionate, he is also able to keep his speech formal. In addition to tone, Mandela’s sentence structure contributes to both tone and conveying his message. He uses lengthy sentences with occasional short and clipped sentences to emphasize a certain point. Mandela says “The time for the healing of wounds has come. The moment to bridge the chasms that divide us has come. The time to build is upon us.”

"Glory and Hope" by Nelson Mandela Analysis. (2016, May 27). Retrieved from https://studymoose.com/glory-and-hope-by-nelson-mandela-analysis-essay 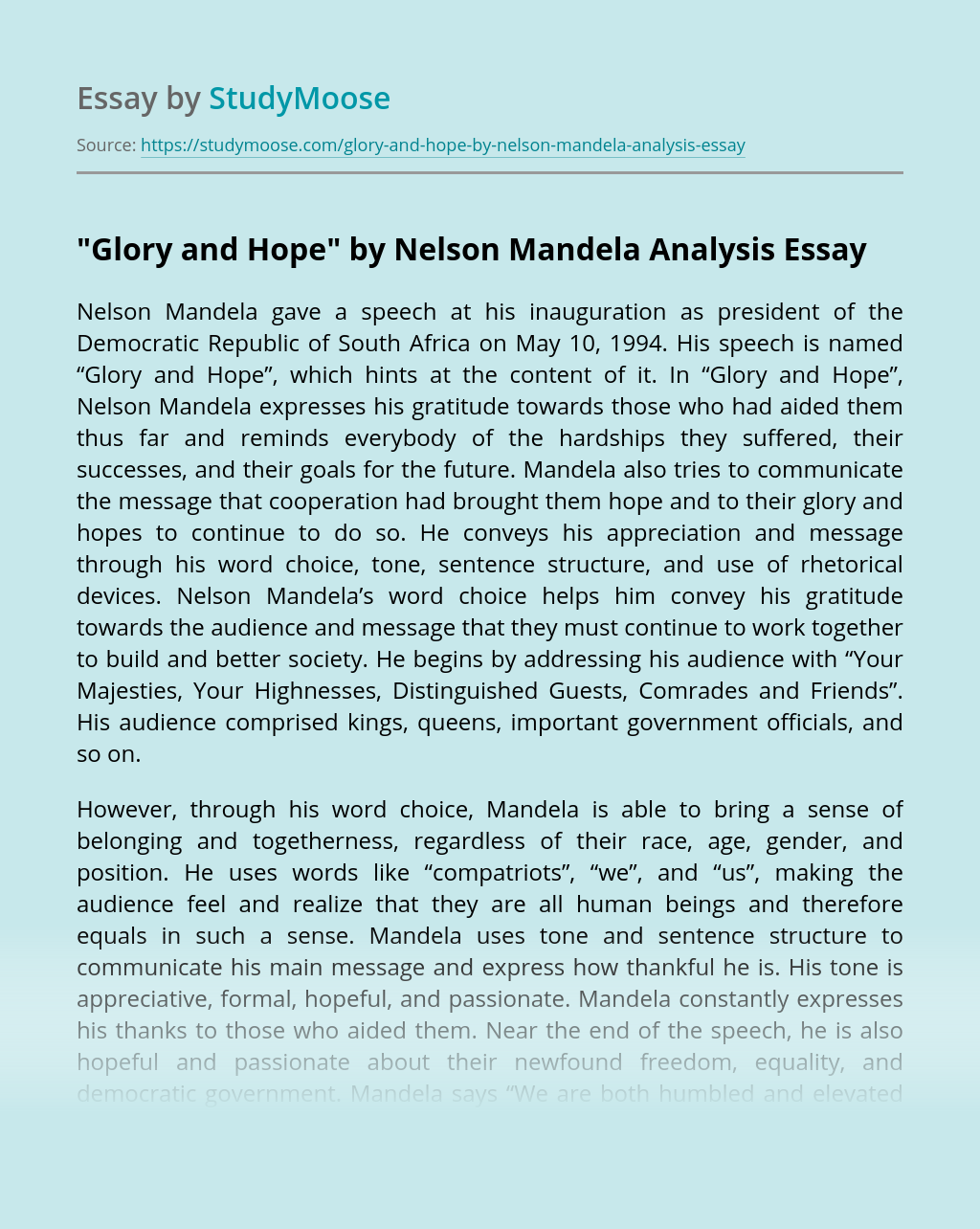