Turn in your highest-quality paper
Get a qualified writer to help you with
“ Glorious Revolution: England and North American ”
Get high-quality paper
NEW! AI matching with writers

What factors contributed most significantly to the growth and prosperity of the British mainland colonies? Some factors that contributed to the prosperity of British colonies were the dethroning of King James II, mercantilism, population growth, and expansion. The crowning of William and Mary opened up a new era for the colonists. William dismantled the Dominion of New England and brought back self-governing colonies rather than crown appointed governors.

The colonies wouldn’t purchase things from other nations but they would encourage other nations to buy from them. Mercantilism became the commercial economy of England. The income produced from mercantilism enhanced commerce. All the colonies had a population growth, not from immigration but from natural increase. In the early 1700s, England expanded many of their colonies like Delaware. England also spread their empire south to Georgia. Georgia became a refugee for debtors to work off their debts.

The production of goods and crops also helped strengthen some colonies. The British especially had success with producing and exporting crops. England, France, and Spain traded with the natives and other countries. A big part of England’s success was the population of the colonies. Spain and France never had a lot of people migrate to their colonies which made them rely on relationships with the Indian’s. England’s overpopulation was good and sometimes difficult for them. Slaves were a huge part of the success with producing goods. Slaves were the predominant source of labor in North American colonies.

What were the most significant results of the Enlightenment and Great Awakening in English colonies? The Great Awakening brought about more personal relationships between man and God. In the past, it was believed that you couldn’t pray directly to God without going through a clergyman or church official. People were put in charge of their own fates. Many of the greatest minds of the Enlightenment tried to help colonists break free from English rule.

The Enlightenment emphasized the equality of men and natural rights. These movements, especially the Enlightenment, helped colonists realize that they were being ruled by an unjust government. This would lead to the colonists seeking independence from England.

Glorious Revolution: England and North American. (2016, May 14). Retrieved from http://studymoose.com/glorious-revolution-england-and-north-american-essay 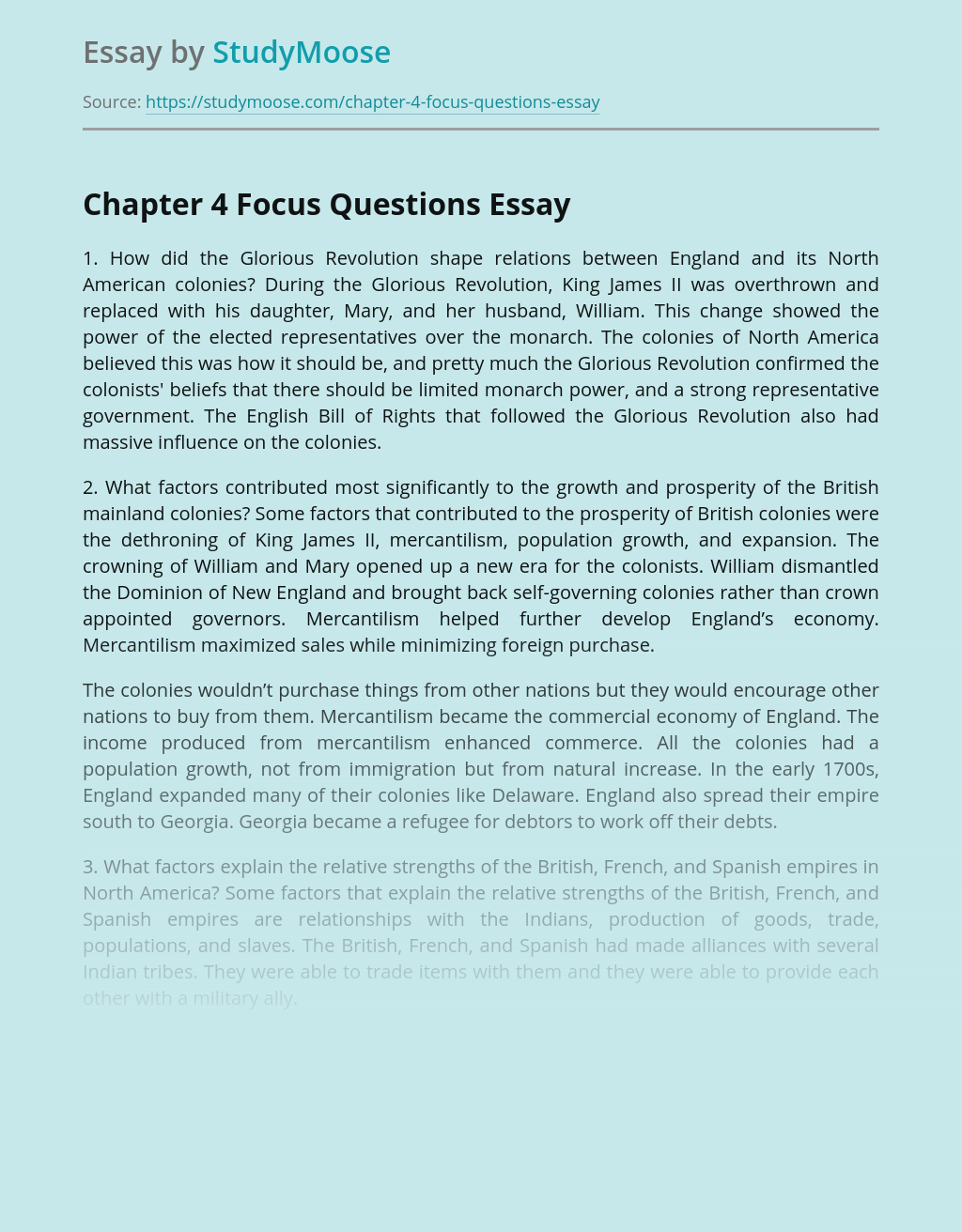 Turn in your highest-quality paper
Get a qualified writer to help you with
“ Glorious Revolution: England and North American ”
Get high-quality paper
Helping students since 2015
Stay Safe, Stay Original