Specifically, its long-term positive effects and the portion that contains negative influences. The definition of globalization has evolved and been altered over the years. Today it is viewed as a process that continuously strives to integrate economies and societies by means of exchange and communication network. The term is also often utilized to show changes in technological, socio-cultural, and political environments (Hill 2009).

Don't use plagiarized sources.
Get Your Custom Essay on Globalization Advantages and Disadvantages Just from $13,9/Page

The process of globalization is contingent upon the integration and interaction among companies, people, and governments of different nations that come to be driven by investments, international trade, and information technology. The process itself has many effects on culture, economic development, the environment, prosperity and the physical well-being of humans around the world. For over a thousand years, corporations and people within different countries have been selling and buying from and to each other therefore globalization itself is not a new concept.

Likewise, over the past centuries, corporations and people have invested in other countries enterprises. In fact, many attributes that are seen among today’s globalization are similar to those that were utilized before the initial World War in 1914 (Hill 2009). Globalization does not always signify a unified global economy simply because internationally, every product within an individual country is not tradable. Haircuts and cement are examples of things that are consumed and produced locally proving that most international trade remains in the area it originates. 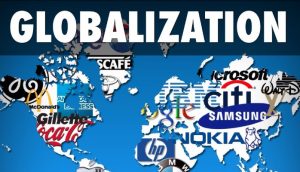 There are three regions that are economically dominant across the globe and they include: North America, East Asia, and Europe. Canada is the United States primary customer in North America’s region while Mexico is number two. The other national economies integration is a continuous process (Weidenbaum 2004). Within the European Union (EU), economic integration seems quite secure. Although, it may be hard to believe, the EU’s most important achievement has absolutely nothing to do with the economy.

The union is interested in minimizing the restrictions on trade, business, and labor. Since there is an increase in services, goods, and investments there is an increased ability for these items to move freely among one EU nation to another. Therefore, European businesses achieve greater economies of scale making them more efficient. However, serious disadvantages can result for countries outside the EU. The EU has common external trade restrictions against nonmembers that allow them to reduce the internal trade barriers.

Before the European Common Market gained momentum in 1960, more than 60% of the foreign trade of the 15 member nations was outside the EU. Presently, about 70-80% stays in the EU which is not good for American companies who are trying to export to Europe (Weidenbaum 2004). During the reign of globalization it has produced elemental changes in businesses across the nation. For example, half of Xerox’s employees work on foreign soil and less than half of Sony’s employees are Japanese.

More than 50% of IBM’s revenues originate overseas; the same is true for Citigroup, ExxonMobil, DuPont, Procter & Gamble, and many other corporate giants. In a pursuit to aid in financial development, previously competitive companies have formed strategic alliances overseas on different continents (Weidenbaum 2004). The electronics and automotive industries provide numerous examples of these alliances. Volkswagen produces cars with Ford for the Brazilian market, while General Motors and Toyota operate a major joint venture in the U. S. Boeing and British Aerospace have teamed up for military projects and in today’s global market; the same companies are often customers, competitors, and suppliers, to and for each other. 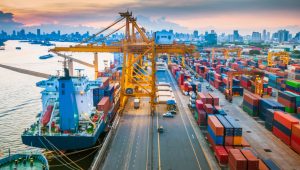 Regardless which approach is utilized, in the end becoming an internationally oriented company usually pays off simply because the sales of American companies without foreign activities often grow at half the rate of those who possess international operations. Likewise, companies that have an international business component have and increase in profits and grow faster in the ndustry (Globalization 2005). While globalization is continually changing the world as we know it, there can be many positive and negative effects associated with its impact. Beginning after WWII, one of the most positive effects of globalization is its impact on trade. The interdependence, prosperity and wealth of nations with one another have caused an increase in free trade which has dramatically reduced the chances of war from an economic standpoint.

The establishment of free trade zones contains direct effects such as reduction in transportation costs, reduction in capital controls, elimination, standardization and universal recognition of intellectual property laws or at least, establishment of subsidiaries by global corporations (Globalization 2005). Culturally, with the developments in information and communication technology, globalization has brought about what is referred to as homogenization making the world a smaller place.

With all boundaries lost, access to other cultures becomes easier, and people are able to believe that this can help in the promotion of peace and harmony among different cultures and ethnicities. This way of thinking has lead to the creation of another fundamental component of globalization, world culture (Pros and Cons 2010). Last, but not the least, globalization has also had a positive influence on the political climate, the environment, and the industrial, information, and communication sector, which in turn helps promote international tourism.

Further, there has been a standardization of not only cultural identity but also cultural likes and dislikes, with entertainment and pop culture being freely accessible to anyone, anywhere. Socially, globalization has helped non-governmental organizations by improving their reach into different nations (Rodrik 2007).

In a negative perspective, globalization has resulted in the spread of many infectious diseases primarily because people are no longer restricted in their worldwide movement since the enhancements in travel and transportation. Unfortunately, there has been a negative effect not only n the environment but also on prices and demand, especially for oil because globalization has helped the economies of developing countries by increasing competitions and production in worldwide markets.

Economically, for poorer nations globalization can appear to be a disadvantage simply because it negatively affects national markets even though globalization encourages free trade. Apart from the initial problem of exploited foreign workers, the shift in outsourcing has also resulted in the loss of employment among those in the domestic manufacturing sector. Read about advantages of tourism in Mauritius

In addition, the weakening of labor unions and lowering of wages and the increase and exploitation of child labor has also shown to be a negatively impacting globalization (Rodrik 2007). Lastly, globalization is shown to have negatively affected the traditions, uniqueness, and national identity of people across the world. The growing economic strength of some countries is generating problems as well as opportunities for business firms, workers, and consumers everywhere.

For example it is hard to ignore the challenges that arise in our economy when countries like China have developed industrial power and India is becoming a major service center. History within itself shows us examples of similar basic changes that have occurred. Europe dominated the world economy in the 19th century, but it ended when he U. S. rose as a major industrial power. In the 20th century, Japan emerged as a major economic power as the pace of economic development accelerated.

In the 21st century, it seems as if China and India will fill the upcoming position (Environmental Politics 2010). To conclude, over the past two decades, we have witnessed the globalization of markets and production. The globalization markets showed that national markets are merging into one huge marketplace. Since the end of World War II, barriers to the free flow of goods, services, and capital have been lowered significantly and the benefits and costs of the emerging global economy are being intensely debated upon among business people, economists, and politicians.

The debate focuses on the impact of globalization on jobs, wages, the environment, working conditions, and national sovereignty. Globalization itself has strengthened all countries helping us to know and understand each other’s needs in a better way. For that reason, it has become a fiscal term that does not limit the economy of different countries and has largely affected the politics and culture of all parties involved. This in turn has helped to demolish those walls that separated and curbed our natural identity of being fellow human beings (Pros and Cons 2010).

Rate this post What is meant by western culture: Western culture, sometimes equated with Western civilization or European civilization, is a term used very broadly to refer to a heritage of social norms, ethical values, traditional customs, religious beliefs, political systems, and specific artifacts and technologies. The term has come to apply to countries whose...

The Challenges Of Globalization

Rate this post Answer each question using your new knowledge of current global trends. Each question is worth 6 points, for a total of 30 possible points. (6 points) 1. Many workers throughout the world make such low wages that they have a difficult time simply surviving. How can people laboring for starvation wages address...

Get Essay
The Globalization of Eating Disorders by Susan Bordo: Analysis

Rate this post “The Globalization of Eating Disorders” by Susan Bordo says that eating disorder has became big problem. Bordo’s explains about how the body image, media, and culture influence the standard of the beauty and lead to eating disorder. She provides astounding facts and examples to really open people’s eyes. She not only covers...

Success and Failure of G7/8

Effects of Globalization Towards Our Culture

Rate this post This article focuses on the globalization of culture and the role of media in the ensuing identity crisis (both individual and social) resulting from this process. The article tries to display the basic concept of the process of globalization with all of its effects, threats, challenges，and opportunities and will illustrate its interaction...

Rate this post Technology is ubiquitous. Whether you are in the industrialized world or developing markets, a growing number of people are connecting with mobile devices like colorful cell phones and very portable computers like Apple’s iPad. This allows people to communicate across archaic boundaries within companies or externally across the world. They have instant...

Thomas Friedman's The World is Flat

Rate this post Thomas Friedman’s The World is Flat aims to break down the causes of globalization and address how today’s countries and companies must adapt to the changing conditions. Friedman states that we are in the era of Globalization, a period driven by individuals. Previously, globalization had been driven by states and countries, followed...