The concept of maturation presented by Arnold Gesell is central to developmental psychology. He said that childs growth or development is influenced by the environment and the action of the genes.

He also indicated that the childs development occurred in a fixed order through a series of stages. He opposed any instructional efforts on placing a child ahead of schedule; when the time is right, the child will simply begin to master the task through his/her own inner urges.

Don't use plagiarized sources.
Get Your Custom Essay on Gesell’s Concept of Maturation Just from $13,9/Page

Two major criticisms to his concept are also presented in this paper.

Pioneered by the American psychologist Arnold Gesell (1880-1961), the concept of maturation, which is central to developmental psychology, stresses the role of nature in human development (Gale Group, 2001.)The purpose of this paper is to take a look at the major concepts of Gesells concept of maturation and to present and discuss two criticisms of his concepts.

Gesells Concept of MaturationGesell said that the childs growth or development is influenced by two major forces: The environment and the action of the genes. Gesell called this process maturation (Crain, 2005).

He observed that a childs development occurred in a fixed order through a series of stages. This is an outstanding feature in maturational development. (Gale Group, 2001).

His concept of maturation allowed him to see that just like a baby learns to run by first sitting, then standing, then walking, the principles of maturation also have a rate of development that is controlled by internal genetic mechanisms (Crain, 2005). And the forces of socialization that are so important in the growing and developing of a child have a positive and direct effect only if they are in tune with the inner maturational principles. Therefore, he opposed any instructional efforts on placing a child ahead of schedule; when the time is right, the child will simply begin to master the task through his/her own inner urges. Until then, teaching will be of little value and will only create tension between the child and the caregiver (Crain, 2005).

As an evidence of his concept of maturation, Gesell and Thompson conducted a study with twins. One twin was trained on activities such as stair-climbing and the grasping and manipulation of cubes. The twin that was trained showed some superior skill when compared with the untrained twin. But the untrained twin soon caught up, with much less practice, and at the age that he was supposed to perform those activities. Then, there is a timetable that determines the childs readiness to do things and the benefits or early training and teaching are relatively temporary (Crain, 2005).

Discussion of Criticisms on Gesells concept of maturationThe interplay of nature and nurtureThe interplay role of nature and nurture, rather than the importance of one over the other, has gained a greater emphasis in the work of more recent figures, such as psychologist Jean Piaget, whose theory of cognitive developmentin children has been a model for much subsequent work in the field. Going beyond simplistic dichotomies, scientists have been able to gather substantial amounts of specific data on the effects of heredity and environment through family, twin, and adoption studies.

Current concepts of maturation focus on models in which each stage of a developmental process is defined not only by innate characteristics but also by increased receptivity (or “readiness”) toward certain environmental factors. (Gale Group, 2001.)Age normsOne of the most frequently cited criticisms of Gesells concept of maturation has to do with his manner of presenting age norms. He implies too much uniformity and gives no idea on how much variation can be expected at any given age. His norms were based on middle-class children in a university setting and may not apply perfectly in other cultural contexts (Crain, 2005). 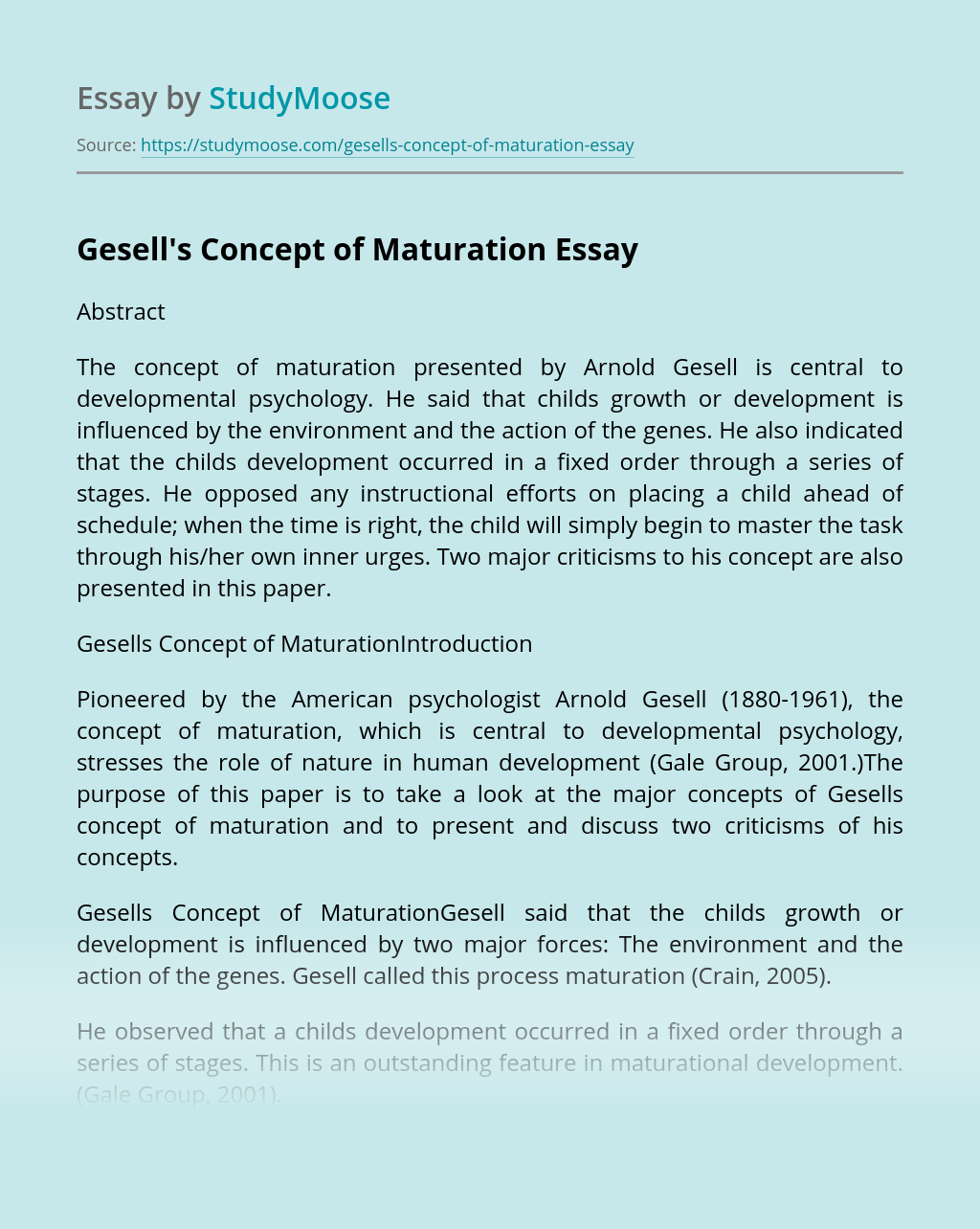 The Importance For Price Elasticity of Demand

The Price Elasticity of Demand for goods indirectly dictates the function of today’s economy, it does this by using the wants and needs of the consumer and in-turn governs the prices for individual goods. Below, scenarios in which government or firm have to look at the PED are presented and how they react to create... VIEW ESSAY

Cultural Observation Culture is the sum total of learned beliefs, values, and customs in which a people of a particular society live. Culture is dynamic and always changing but retains patterns that form its basic infrastructure. Many aspects of a people’s society make up one’s culture including religion, economy, language, politics, etc. Cultures are not... VIEW ESSAY

Ibong Adarna, with its mysterious and unknown author but remarkable plot, is credited as one of Philippines’ greatest work of literature ever written in the country. It is one of the must-see or must-read literary pieces like Rizal’s Noli Me Tangere and El Filibusterismo, which students are required to experience in order to appreciate Filipino... VIEW ESSAY