Genetically modified (GM) foods have been around for thousands of years. In the 1990s, they started being sold commercially in the United States, which was the start of this controversy: Are GM foods good or bad for us? Do the pros outweigh the cons? In my opinion, genetically modified foods are nothing to worry about. GM foods are produced from genetic engineering. Scientists take a certain gene from an organism that is desired and put it into another organism.

For example, scientists might take a drought resistant gene from a plant and insert it into a crop, so that crop will not die during a period of low rainfall.

Don't use plagiarized sources. Get your custom essay on
“ Genetically Modified Foods: Helpful or Harmful? ”
Get custom paper
NEW! smart matching with writer

There are various ways to add in these desired genes, such as crossbreeding, which has been used since the beginning of agriculture, bacterial transfer of DNA into a cell, and a newer method of shooting DNA particles into a cell with particle gun, developed by Cornell University (Freedman, 83). There are numerous advantages of genetically modified foods.

Crops can become impervious to insects.

According to Whitman, “Consumers do not wish to eat food that has been treated with pesticides because of potential health hazards, and run-off of agricultural wastes from excessive use of pesticides and fertilizers can poison the water supply and cause harm to the environment. ” Making the crops pest resistant makes more people want to buy them and is safer on the environment. Since farmers can use less pesticide, the cost of the food decreases and less people go hungry. “It has raised the output of corn, cotton and soy by 20 to 30 percent, allowing some people to survive who would not have without it (Freedman, 82).

” Another advantage is adding vitamins and minerals to foods that lack them. Foods become more nutritious. For example, “Malnutrition is common in third world countries where impoverished peoples rely on a single crop such as rice for the main staple of their diet. However, rice does not contain adequate amounts of all necessary nutrients to prevent malnutrition. If rice could be genetically engineered to contain additional vitamins and minerals, nutrient deficiencies could be alleviated (Whitman).

” LaPensee also agrees: “Genetic manipulation could increase agricultural yields in developing countries with the development of more sustainable crops. For example, disease- and pest-resistant fruits and vegetables with higher nutritional value (e. g. , more iron, vitamin A, and protein) could improve the health of people in developing regions where the imbalanced indigenous diet is overly dependent on grains such as rice and corn. ” This can decrease hunger and sickness world-wide. On the contrary, GM foods do have some disadvantages. When you modify plants and animals genetically, biodiversity decreases.

“Homogeneity may make crops more susceptible to disease. Thus, the present uncertainty about the cumulative effects in ecosystems or the food chain is making consumers wary (Hoyle and Lerner). ” With a decrease in biodiversity, all crops that are genetically similar are more susceptible to die during a natural disaster. Also, scientists do not know all of the effects of these GM foods on our health. “For a variety of reasons, not all scientifically based, some people argue that transgenic food is a consumer safety issue because not all of the effects of transgenic foods have been fully explored (Transgenics).

” GM foods should definitely be labeled. People have a right to know whether or not their foods have been genetically modified. Businesses argue that it would cost more for the consumer if their was a label, but “the demand for transparency is unlikely to go away so, for crying out loud, just label it (O’Brian). ” Genetically engineered foods are very helpful. They can be more nutritious and better for the environment. These modifications help people all over the world, especially people dependent on certain crops. There are some criticisms, but the good outweighs the bad. 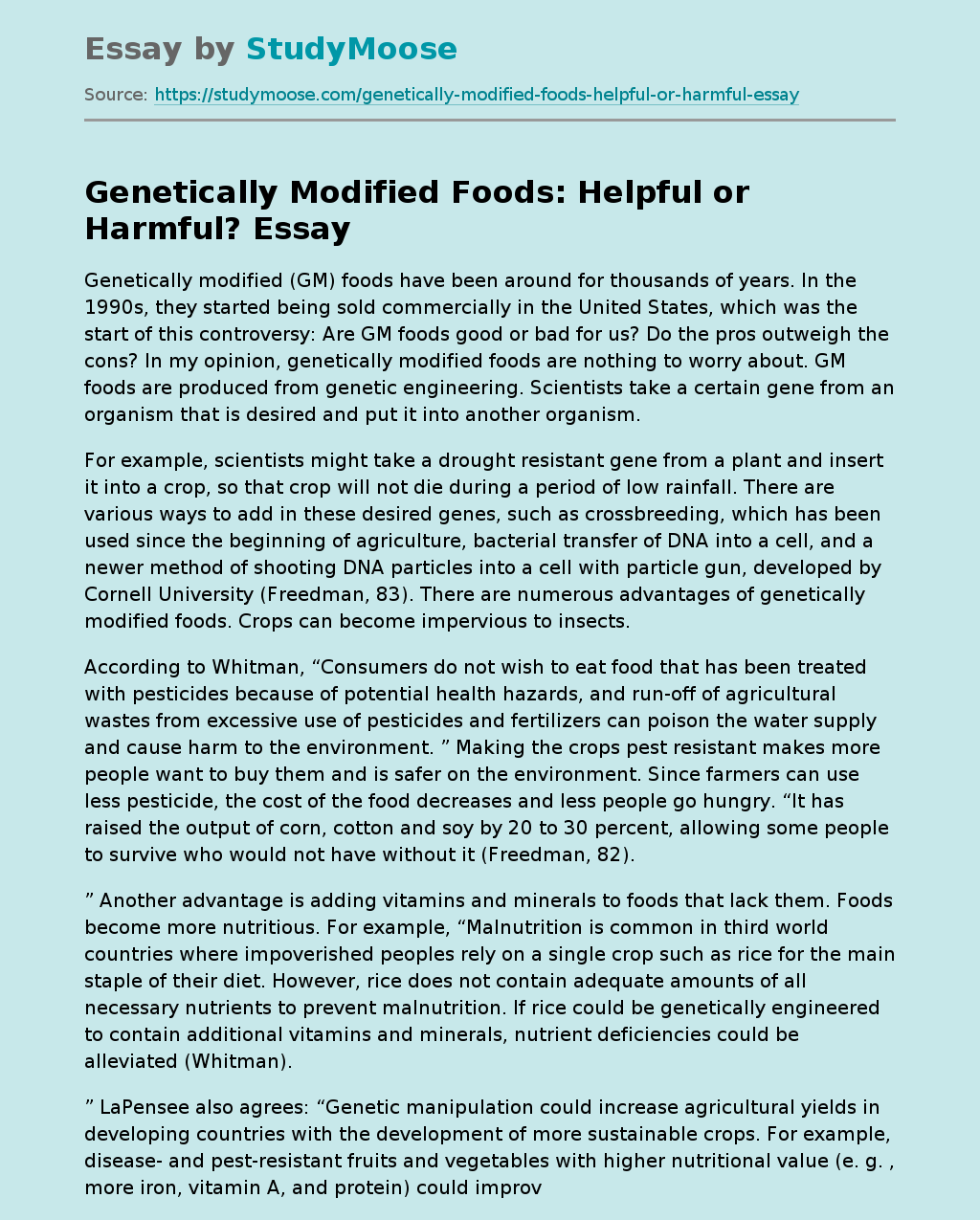