General Zaroff, one of the main characters in The Most Dangerous Game, was introduced to readers towards the middle of the book and is the antagonist throughout this short story. General Zaroff displays a love for hunting, an unstable and unremorseful mind, and also displays arrogance and cockiness. These three character traits are supported by his actions and words throughout the short story. General Zaroff displays a very passionate love for hunting, which allowed Rainsford and Zaroff to relate to each other fast right when they met each other.

Also, during General Zaroffs conversation with Raisnford he states, “I killed my first bear in the Caucasus when I was ten.”(pg.23) This quote shows that the generals love for hunting sprouted when he was just a young boy, and has been passion ever since. General Zaroff constantly shows throughout, whether it is in what he says, or the actions he portrays, that he has a very unstable mind and is somewhat of a psycho. For example, towards the end of the lengthy conversation between General Zaroff and Rainsford, General Zaroff says, “I hunt the scum of the earth- sailors from tramp ships, lascars, blacks, chinese, and mongrels.

This quote shows that General Zaroff thinks of murder as a game and has no remorse in killing humans of any type. This quote also reveals that “hunting” and killing humans is a hobby for General Zaroff and is taken very lightly by him. Also, during their conversation General Zaroff stated, “This is why I use them. It gives me pleasure. They can reason, after a fashion.” (pg.26) When reading this quote it should bring chills to you because of the way general Zaroff talks about other humans. He refers to them along the lines of animals that he is hunting, therefore taking the lives of humans doesn’t bother him what so ever. He also says at the end of the quote that killing humans brings pleasure to him, which breaks almost every morale code of society.

Genral Zoroff shows throughout the book that he is very arrogant and cocky, whether it is through his actions or through his words. During the conversation between the General and Rainsford, General Rainsford states, “I have hunted every kind of game in every land. It would be impossible for me to tell you how many animals I have killed.” (pg. 23) Analyzing this quote you can see that general Zaroff has been all over the world and has hunted every type of animal, but the way he comes across is very arrogant and cocky. A little later on in the same conversation General Zaroff says, “Life is for the strong, to be lived by the strong, and if need be, taken by the strong. The weak of the world were put here to give the strong pleasure. I am strong. (pg. 26) The arrogance in this quote is overwhelming and is a prime example of showing just how cocky General Zaroff is.

It also shows that he sees himself higher up than most people and is better and stronger than everyone else in every way. Throughout the short story, The Most Dangerous Game, General Zaroff portrays the part of a psychotic killer who loves to hunt and has lots of arrogance not only when he speaks but through his actions as well. General Zaroff thinks he is the best hunter to ever walk on the earth, but is proven no match for Rainsford who beats Zaroff at his own game. Even though the book doesn’t exactly tell the ending it hints to the fact that Raisnford killed the psychotic General Zaroff. 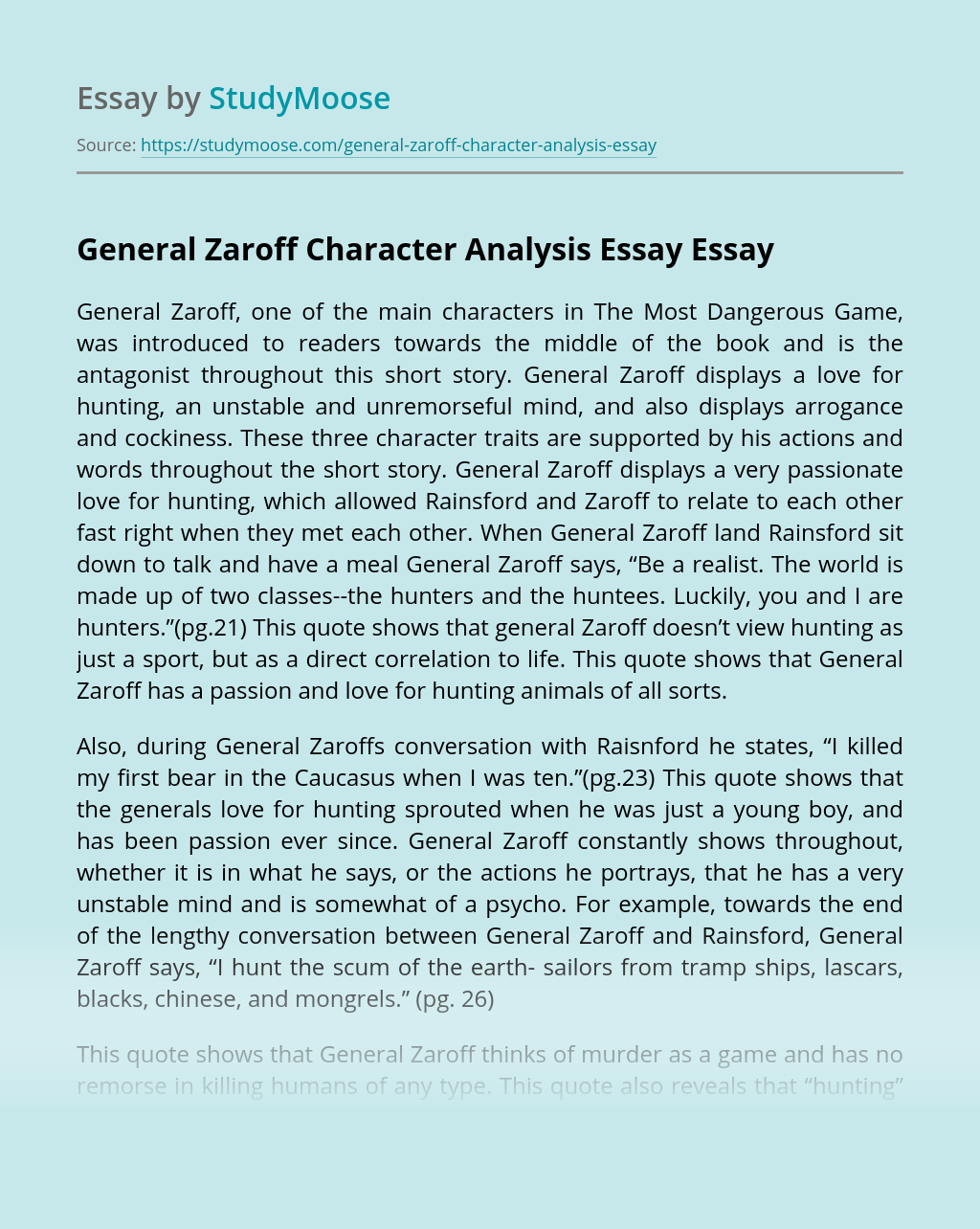