Character and Conflict in "The Most Dangerous Game"

Conflict and Character in “The Most Dangerous Game”

There’s a popular worship song called “Love Knows No End” by Hillsong. Although it may be simply sung at church, I find it relative to General Zaroff, a hunting fanatic in “The Most Dangerous Game”. His ardent passion for the thrill of hunting led him to seek a greater challenge. Since he had already perfected the art of killing all of his quarry without exception, he decided to pursue a new creature; one that could reason and provide a more perplexing chase – humans.

Turn in your highest-quality paper
Get a qualified writer to help you with
“ Character and Conflict in “The Most Dangerous Game” ”
Get high-quality paper
NEW! AI matching with writer

Unfortunately, Rainsford accidentally stumbled across Shiptrap Island, the location where General Zaroff hosted his malevolent game. Undoubtedly, conflicts have brought out the true character of everyone. As in the case of Rainsford and General Zaroff, from “The Most Dangerous Game”, by Richard Connell, it was seen that the dilemmas and obstacles either contributed to creating a dynamic or static character.

Without conflict, there would be no brilliance or appeal to a story.

It is a vital element in literature that presents the character a challenging struggle from an opposing force, whether it be nature, an antagonist, or the character himself. Such as, “‘Rainsford,’ called the general, ‘if you are within sound of my voice, as I suppose you are, let me congratulate you. Not many men know how to make a Malay mancatcher’” (Connell 13). This demonstrates a competition for General Zaroff, granted that he was a hunting prodigy. Very rarely, has someone been close to winning the game, Rainsford being one of them.

General Zaroff recognized that possibility and perhaps have had glimpses of fear and uncertainty. On the other hand, “Rainsford knew he could do one of two things.

He could stay where he was and wait. That was suicide. He could flee. That was postponing the inevitable” (Connell 14). This was the climatic struggle for Rainsford from the story because of his hopelessness. He could not dismiss the fact that at one point, he would die from the hounds. Rainsford perceived this tragic circumstance since his mind was weak from the mental battles, along with the physical hardships he faced throughout the whole game. Therefore, the conflicts from this story resulted in either a transforming or stagnant character.

For instance, General Zaroff’s character development proved to be static, in other words, not changing throughout the story. To illustrate this, “He could see the great hounds, and he called, ‘Better luck another time,’ to them” (Connell 15). Considering this quote, it was apparent that he would continue his monstrous game in the future. Even with General Zaroff’s predicament of possibly losing the game and his murdering secrets being revealed, he did not relinquish his passion for bloodshed. Another case is, “Two slight annoyances kept him from perfect enjoyment. One was the thought that it would be difficult to replace Ivan” (Connell 15). Rainsford constructed an ingenuous trap that killed Ivan and a few of the hounds. As a consequence, General Zaroff lost his loyal accomplice. Accordingly, he would be on the search for a new “Ivan”, confirming that he still needed a partner to help him with his games. Thus, General Zaroff remained the same character that he always was, a ruthless hunter, despite his struggles.

In contrast, the dynamic character in the story was Rainsford, due to his change in his approach of sympathizing with his prey. For instance, “‘Who cares how a jaguar feels?’” (Connell 1). This was his remark to his associate, Whitney, who pitied the jaguar, along with the rest of the victims in every hunt. Rainsford shrugged off the idea of empathy, stating that he was a hunter, and not a huntee. Eventually, “At daybreak Rainsford, lying near the swamp, was awakened by a sound that made him know that he had new things to learn about fear” (Connell 14). Throughout the arduous days in the game, Rainsford finally understood the world of a huntee. The experience firsthand led him to a form of sympathy or at least respect for his prey. Although the author was not clear about Rainsford maintaining his hunting lifestyle after this encounter, it can be concluded that he portrayed a dynamic character through his conflicts in the jungle.

General Zaroff’s love for hunting truly had no limits, which brought forth the slaughter of countless men, in addition to his own death. In many ways, love knows no end, as portrayed in the title of the praise song by Hillsong. However, Rainsford’s aspiration for hunting was altered by the challenging experience of living as a prey, therefore illustrating a dynamic character, as opposed to General Zaroff, who remained the static character undeterred by his conflicts.

Character and Conflict in "The Most Dangerous Game". (2016, Apr 05). Retrieved from https://studymoose.com/character-and-conflict-in-the-most-dangerous-game-essay 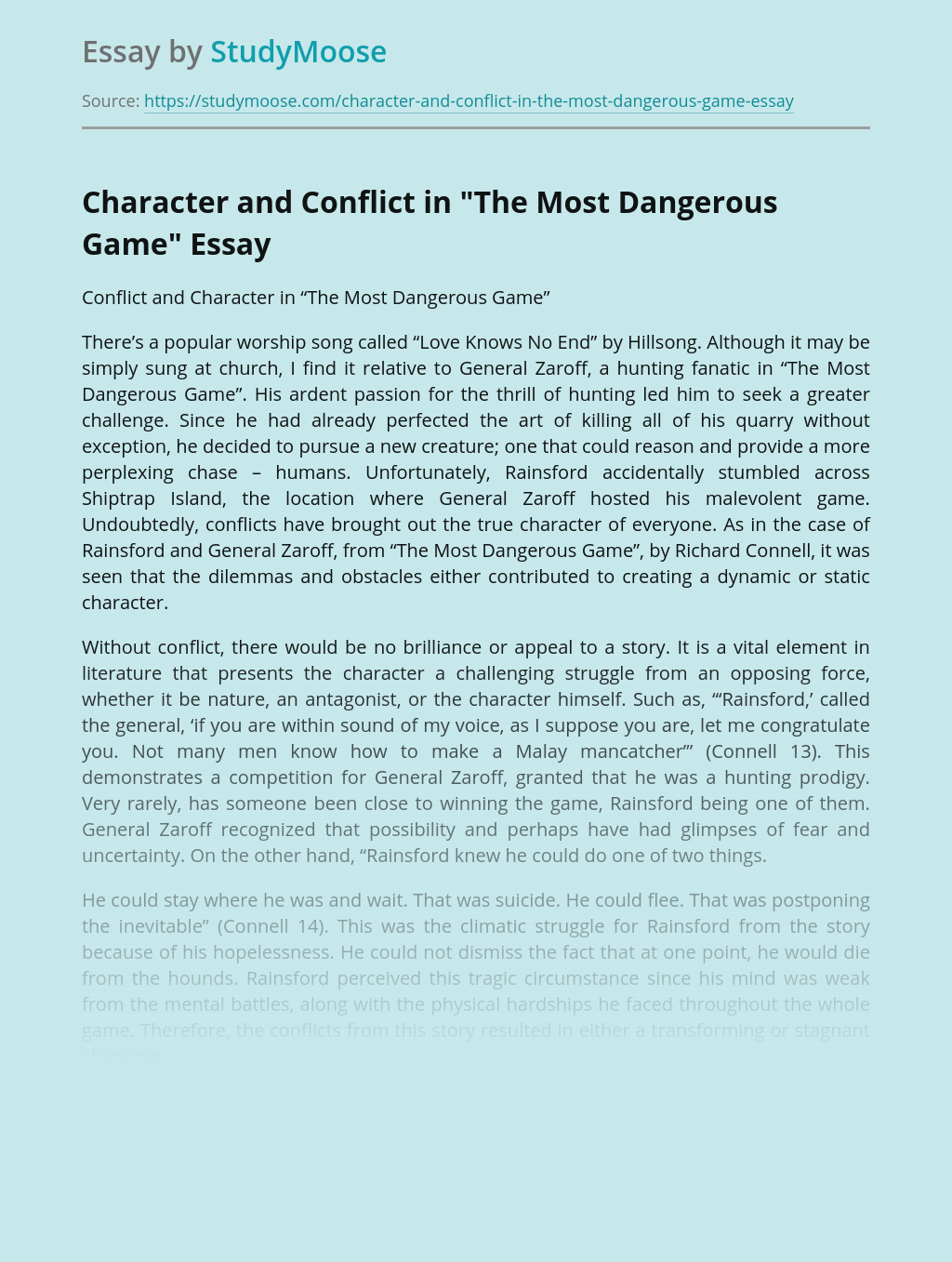 Turn in your highest-quality paper
Get a qualified writer to help you with
“ Character and Conflict in “The Most Dangerous Game” ”
Get high-quality paper
Helping students since 2015
Stay Safe, Stay Original