"The Most Dangerous Game" by Richard Connell

In ‘The Most Dangerous Game,’ Richard Connell describes the challenges that Rainsford went through while on ‘Ship-Trap Island.’ There were many moments in the story where Rainsford had crucial life or death decisions to make. Many character conflicts occur in this story such as character vs character, character vs nature, character vs supernatural, but the most difficult for Rainsford was self-conflict.

Rainsford worked very hard and was patient in an effort to wear General Zaroff down while he was being hunted by him.

Don't use plagiarized sources. Get your custom essay on
“ “The Most Dangerous Game” by Richard Connell ”
Get custom paper
NEW! smart matching with writer

Rainsford dug a hole above his shoulders in the mud ‘and from some hard saplings, cut stakes and sharpened them to a fine point. He planted these stakes in the bottom of the pit with the points sticking up. With flying fingers he wove a rough carpet of weeds and branches and with it he covered the mouth of the pit.’ This section of the story demonstrates how much Rainsford prepared to battle against General Zaroff. He is known as a very skilled and talented hunter and has written books about hunting.

Proficient in: The Most Dangerous Game

Rainsford knows how hunters act and what they look for, therefore he was able to counteract some of General Zaroff’s tactics and abilities. Rainsford was patient in his process to survive and he forced himself to keep going. As a result of doing these things, he was able to harm General Zaroff without getting himself injured. This required a lot of self-control. He was fighting against General Zaroff physically but he was fighting against himself mentally and physically.

There was another moment in the story when Rainsford had a life or death decision to make and it was actually the climax of the story. In the story it states, ‘A blue gap showed between the trees dead ahead. Ever nearer drew the hounds. Rainsford forced himself on toward that gap. He reached it. It was the shore of the sea. Across a cove he could see the gloomy gray stone of the chateau. Twenty feet below him the sea rumbled and hissed. Rainsford hesitated. He heard the hounds. Then he leaped far out into the sea. . . . ‘ This example could be considered different kinds of character conflicts but I see it best as character vs self. Rainsford had to make a quick decision in which could result in death either way. Earlier in the story when he is in the water he has a hard time swimming to shore which helps us infer that the decision to jump off the 20 foot cliff wasn’t easy but it was better than taking a bullet to the head. Rainsford goes with his instinct in this part of the story and he ends up living because of it.

At the end of the story, Rainsford loses all of his patience and self-control as he has the opportunity to take out General Zaroff. In the story it states, ‘The general made one of his deepest bows. “I see,” he said. “Splendid! One of us is to furnish a repast for the hounds. The other will sleep in this very excellent bed. On guard, Rainsford.” . . . He had never slept in a better bed, Rainsford decided.’ Rainsford has his opportunity and he kills General Zaroff and then sleeps in his bed. This is a great example of character vs character but also a great example of character vs self. He is against himself in this part of the story because he loses his self-control and decides to defeat General Zaroff.

In his story, Richard Connell conveys how one can survive in harsh situations by being calm and working through their difficulties even if the odds aren’t in their favor. All of the people that General Zaroff has hunted before Rainsford have lost their nerve and that was their downfall. Rainsford was calm and patient the whole time while fighting against General Zaroff and this helped him to win in the end.

"The Most Dangerous Game" by Richard Connell. (2016, Jun 27). Retrieved from https://studymoose.com/the-most-dangerous-game-by-richard-connell-essay 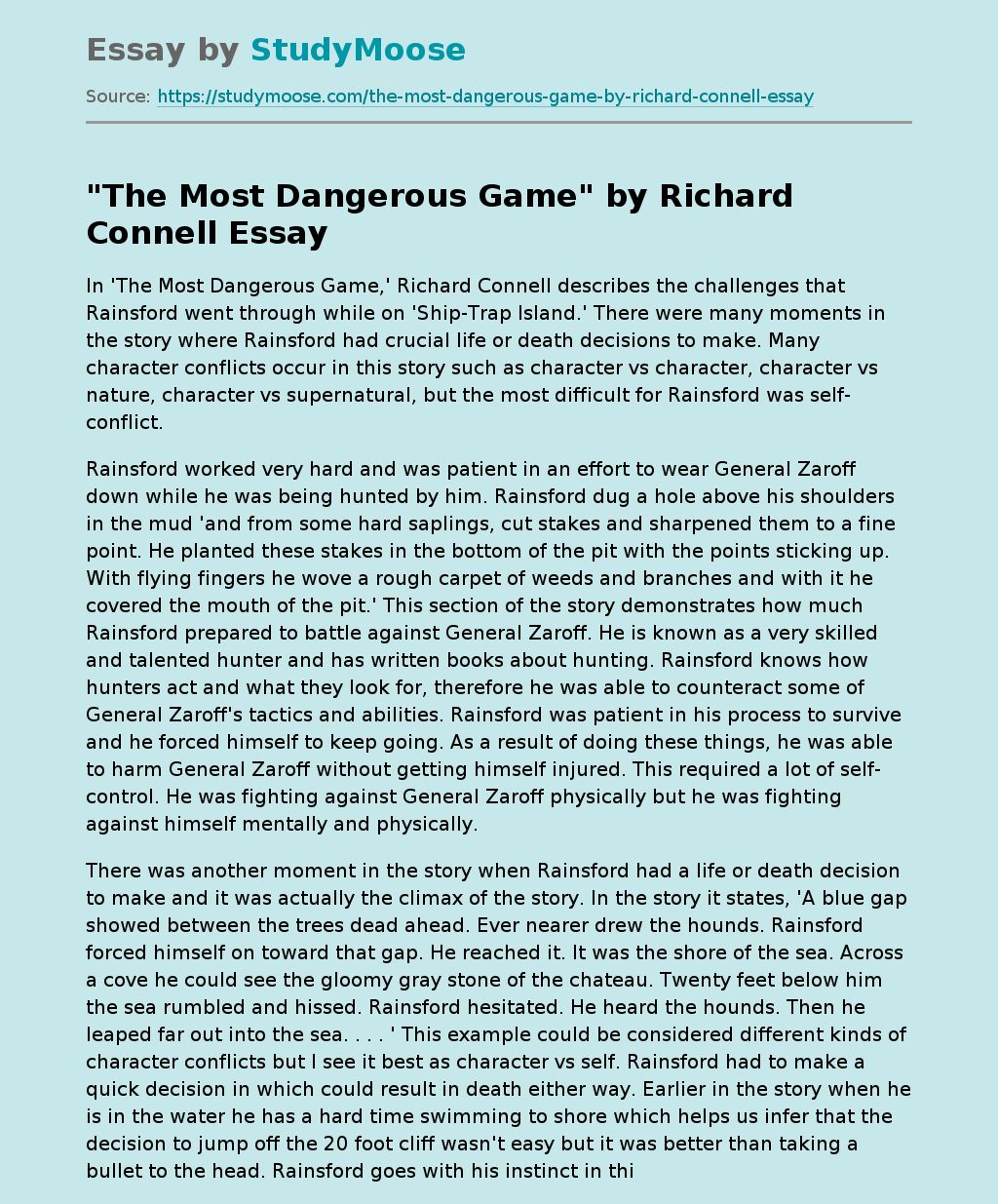