The Most Dangerous Game- Rainsford

As a dynamic character in Richard Connell’s “The Most Dangerous Game,” Sanger Rainsford does undergo changes in his personality. In the exposition of the story, for example, he laughs at Whitney, who sympathizes with the soon-to-be-hunted jaguars. ““Don’t talk rot, Whitney,” said Rainsford…. “Who cares how a jaguar feels?”” (Connell ). Later, however, as he is being tracked by Zaroff, Rainsford hears the baying of Zaroff’s hounds drawing nearer and nearer. “Then he ran for his life. The hounds raised their voices as they hit the fresh scent.

Don't use plagiarized sources.
Get Your Custom Essay on The Most Dangerous Game- Rainsford Just from $13,9/Page

Rainsford knew now how an animal at bay feels” (Connell ). In addition, when at dinner, the general announces his idea and Rainsford is at first appalled General Zaroff would do such a cruel thing as to hunt humans. As Zaroff puts it, ““I refuse to believe that so modern and civilized a young man as you seem to be harboring romantic ideas about the value of human life. Surely your experiences in the war-” “Did not make me condone cold-blooded murder,” finished Rainsford stiffly” (Connell ).

Having shown disgust for killing a man in cold-blood, Rainsford, nevertheless, returns to the Zaroff’s house and hides in the curtains of the bed, only to step out before the general realizes his presence. Rainsford only says, ““I am still a beast at bay…Get ready, General Zaroff…He had never slept in a better bed, Rainsford decided” (Connell ). This last sentence proves Rainsford became the victor and obviously disregarded the cold-blooded murder that he disapproved of. Indeed, Sanger Rainsford changes his opinions about hunting on two fronts: He alters his unconcern for the prey, and abandons his denial of Zaroff’s hunting of men and commits a cold-blooded act of murder himself.

The Most Dangerous Game- Rainsford. (2016, Apr 03). Retrieved from https://studymoose.com/the-most-dangerous-game-rainsford-essay 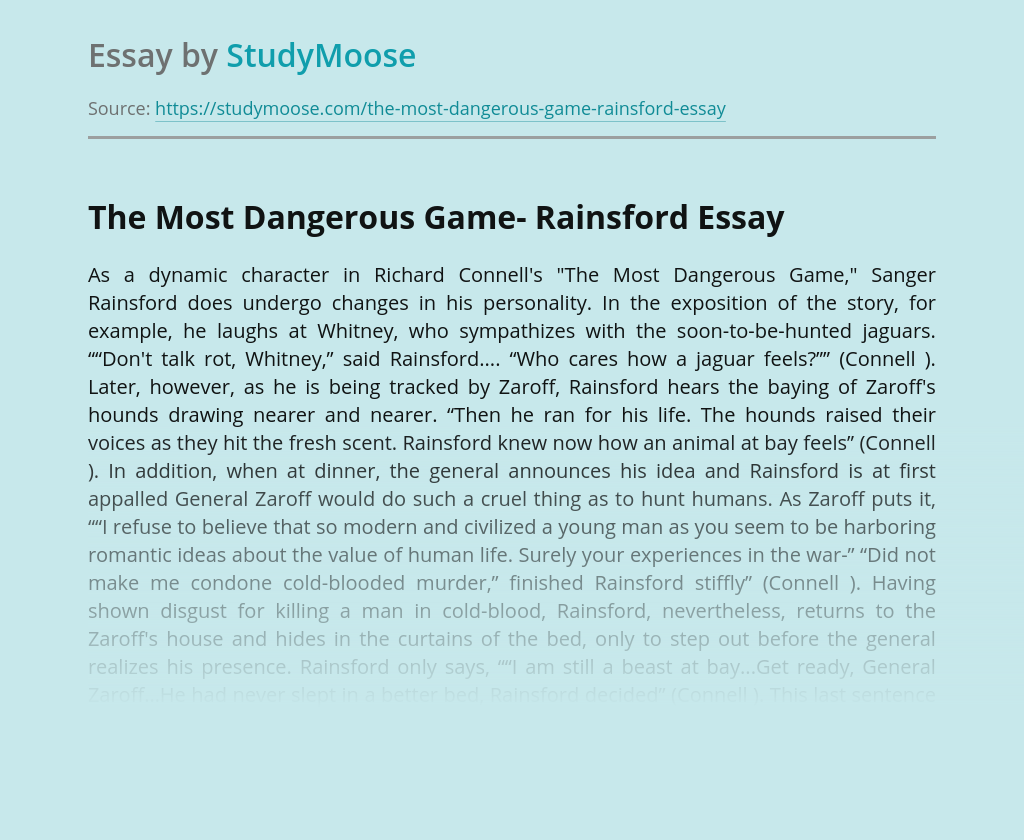 The Story of Keesh and the Life of Pi

In a short story named “The Story of Keesh” and a novel excerpt named “The Life of Pi” both authors, Jack London and Yann Martel, develop certain qualities in characters who find the strength in themselves to want to survive when in extreme situations. Both Keesh and Pi obtain three traits that help them survive...

The identity theorist’s Erik Erikson and James Marcia were important contributors to the mental analysis of an individual’s character and social advancement. Erik Erikson is most notoriously known for his theories on the teen search for identity and his concepts regarding a person’s self-discovery. James Marcia broadened further on Erikson’s principles through his proposal of...

Poaching is a very serious epidemic that affects all countries around the world. Animal poaching is the act of illegally capturing and killing animals and using them for trade. They are used for food, for clothes, wool, cosmetics, ornaments, fat, and decorations and even for sport. It is different in every country and affects many...

The explorer’s daughter is about a woman who is seeing a narwhal hunt take place, and is torn between the lives of the hunter and the lives of the narwhal. She employs lots of language techniques to convey her feelings. She has written this as a descriptive piece of writing but it ends up almost...

From Hunting and Gathering to Civilizations

Overview. The first human beings appeared in east Africa over two million years ago. Gradually humans developed a more erect stance and greater brain capacity. Early humans lived by hunting and gathering. The most advanced human species, Homo sapiens sapiens, migrated from Africa into the Middle East, then into Europe, Asia, Australia, and the Americas....