Garrity Warnings: To Give or Not to Give, That Is the Question

Don't use plagiarized sources. Get your custom essay on
“ Garrity Warnings: To Give or Not to Give, That Is the Question ”
Get custom paper
NEW! smart matching with writer

One of the cases where the Garrity principle was applied is the case of McKinley v. City of Mansfield, 404 F.3d 418 (2005). In this case, there are various facts, and decisions which were made as follows:

McKinley was a police officer when the police department conducted an internal investigation on its administration for all the officers (Eric, December 2012).

All officers were put through an interview whereby they were all under the Garrity principle that said that their statement would not be used for the purpose of prosecution (Eric, December 2012). McKinley lied during the first interview. This prompted the investigator to conduct a second interview with McKinley, but after informing him of the allegations against him and also about the Garrity warning principle. McKinley admitted to have lied in the first interview and this brought about the case against him of lying (Eric, December 2012).

McKinley was informed by the investigating officer that he was being interviewed for the second time following allegations that he had provided untruthful answers during the first interview that was conducted (Eric, December 2012). Upon the completion of the second interview, the investigating officer turned in the statements made by McKinley as well as the findings that had been made during the two interviews to the prosecution for the purpose of prosecuting McKinley. Based on the findings of the investigation, McKinley was terminated but later reinstated to his former position with a back pay as well as benefits based on the collective bargain that was reached under arbitration (Eric, December 2012). Finally, McKinley was charged in court with falsification of information as well as obstruction of the official operations and business of the police department.

When McKinley was charged in court, and made a motion to suppress the statements that he had made from being bused against him in the court of law. The judges declined the request and allowed the use of these statements. Based on the investigation findings and the statements which had been made by McKinley, he was convicted of the crimes brought against him (Eric, December 2012). The appellate court vacated the convictions against McKinley based on the view that the department knew that the statements by McKinley were based on the principle of Garrity hence inadmissible. The resulting action was that McKinley decided to instigate charges against the City of Mansfield as well as the investigating officers and certain police officials within the department (Eric, December 2012). The trial court granted a summary judgment to the defendants but the appellate court reversed part of the decision by the trial court. However, it was held that McKinley was still liable to charges against him based on the findings of the first interview.

From the case of McKinley, it is my belief that best practices were necessary in deciding this case so that there is fairness in the application of the law (Eric, December 2012). It was appropriate that the best practices were exercised in this case since there is need to uphold the law and ensure that the right of every officer is protected as well as that of the department of police.

From the above case of McKinley, it there is no alternative that would have been applicable in this case. The prosecution did not have the right to use the statements that the officer had made under the Garrity principle (Eric, December 2012). Furthermore, the investigating officer was wrong in using the second statement as part of the evidence against McKinley for the purpose of prosecuting him yet the statements were made under the Garrity warnings. The officer was right in taking action against the investigating officer as well as some of the officials in the department hence there are no alternative actions that he was supposed to take after what had transpired (Eric, December 2012). The department also did a right thing in taking him to court, but only based on the first statement from the first interview that he had to lies.

The solution to the case between McKinley and the police department can be reached through an arbitration process whereby the parties can reach a common agreement. Arbitration will help retain the reputation of the department while ensuring that all the parties involved in the matter are satisfied.

Garrity Warnings: To Give or Not to Give, That Is the Question. (2015, Nov 09). Retrieved from https://studymoose.com/garrity-warnings-essay 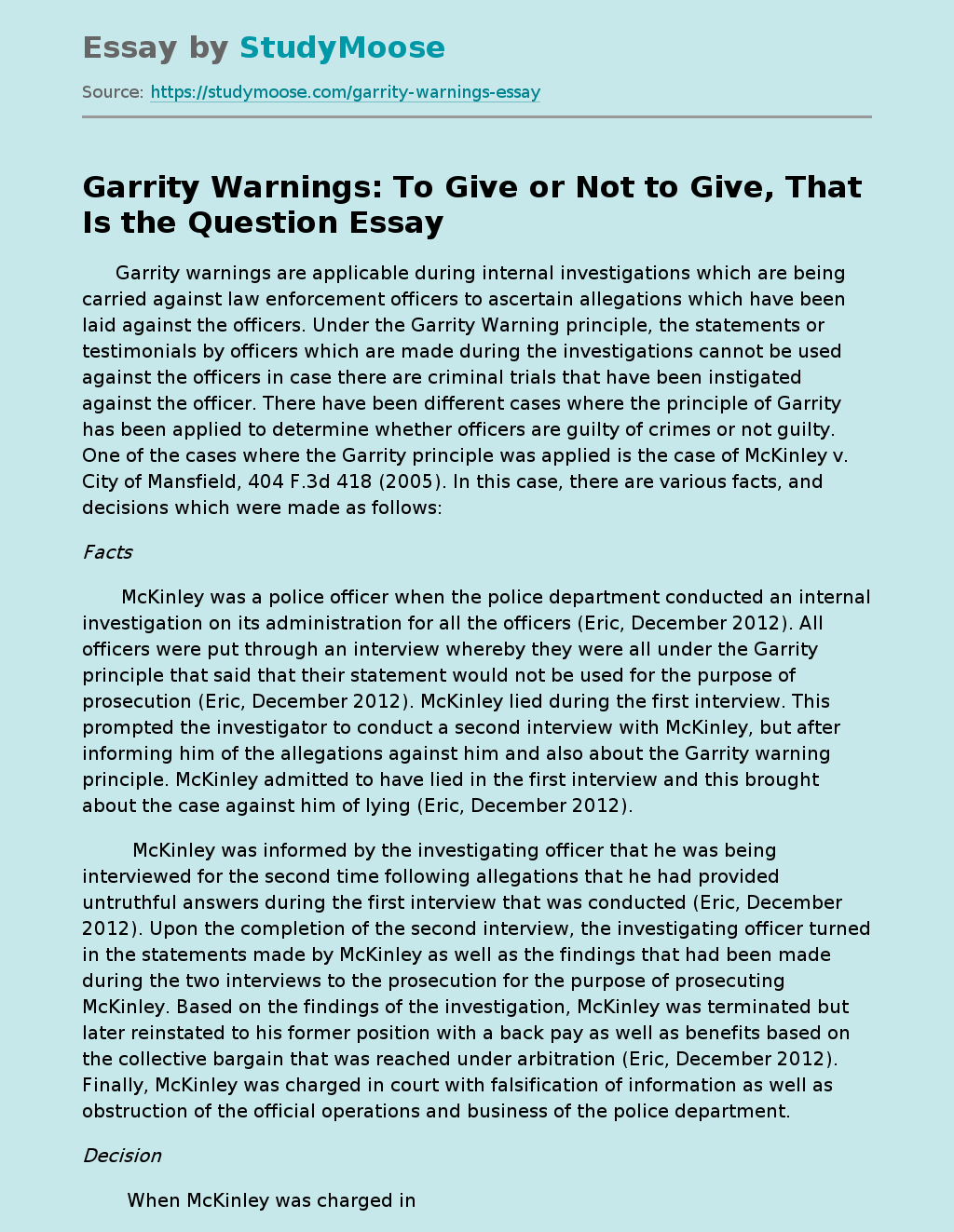