Strong or Not so Strong, that is the Question

William Shakespeare has a way with female characters unlike any other writer of his time or before him. He creates women of his time that have strength, intellect and passion. Although some critics may dispute the strength of certain female characters, such as Juliet of Romeo and Juliet or Lady Anne of Richard III, there are no passive or one dimensional female leads. Though they are human and do err it is in their humanity that they draw their strength and passion.

Don't use plagiarized sources. Get your custom essay on
“ Strong or Not so Strong, that is the Question ”
Get custom paper
NEW! smart matching with writer

Juliet, although seemingly naï¿½ve, is really mature for her age. She has insight beyond the age of a thirteen year old. When she says, “Tis but thy name that is my enemy; thou art thyself, though not a Montegue” she is expressing that she is not caught up in the feud between her family and Romeo’s. While her cousin Tybalt is so obsessed with hating the Montegues, she has the insight even at the age of an early teen, to realize that simply because Romeo is a Montegue does not mean that he is at all like his kinsman.

Juliet understands that Romeo is an individual and she will judge his character accordingly.

Juliet is practical, despite falling in love at first sight of Romeo. While he whispers sweet nothings to her late at night she wonders how he climbed the high walls of the orchard and points out the dangers of him being there, “the orchard walls are high and hard to climb, and the place death , considering who thou art, if any of my kinsman find thee here,” She knows she is falling in love with him, “I must confess, but that thou overheardst, ere I was ware, my true-love passion” but she is also intelligent and sensible “O, swear not by the moon, th’ inconstant moon, that monthly changes in her circled orb, lest that thy love prove likewise variable.

” While Romeo is older he is more infatuated and Juliet has to constantly refocus his attention to practical matters while at the same time expressing her love. She has a fine balance in her personality that he does not possess and a maturity beyond her age.

A woman of no merit and introspect would not consider her situation at any length. A woman of true intellect and emotion would play through the possibilities of her situation giving us a glimpse at the inner workings of her mind. Although Juliet may be mocked in her decision to pretend to be dead until situation permits her otherwise rather than just leave with her husband which would be the most modern conclusion. But Shakespeare had other things in mind for Juliet. Instead of her leaving, we are allowed into her mind by the powerful monologue she has before she takes the drug that will make her seem dead. She is strong enough to bear out her situation on her own, “Nurse, what should she do here, my dismal scene I needs must act alone.” She is completely unwilling to dishonor her husband and shame herself by marrying Paris, “Shall I be married then tomorrow morning? No, no [this dagger] shall forbid it…” Juliet would much rather die than break the commitment she has made to Romeo.

Juliet’s character has been criticized for killing herself when she find that Romeo has taken poison because he thought she was dead. Many people with their modern mindset cannot possibly comprehend why she would want to commit suicide when she was so young and had her entire life to live. It would seem that she was weak and childish to end her life over a man she barely knew. But Juliet was not immature and had reasons for killing herself. If she were to live still her parents would find out about Romeo and they would have been upset with her for that. She most likely would have been forced to marry Paris still and live a miserable life with him, knowing all the while that Romeo commited suicide because he didn’t want to spend the rest of his life without her. To the unromantic mind it would seem folly but in her eyes Juliet can only think of the horror of his suicide and how much she loves him.

Lady Anne is a character that could easily be misinterpreted as weak and fickle. She marries the man that murdered her husband thus placing her own curse upon herself, “if ever [Richard] have wife, let her be made more miserable by the death of him then I am made by my young lord and thee!” She seems easily deceived, seduced by the devil that she despises. But simply because she exhibits human emotion and character traits does not make her weak or unable to stand her ground. More vulnerable than anything, Anne does not lack courage or boldness. She is simple a hurting woman duped by a manipulative fiend.

When the fiend, Richard, comes upon the grieving Anne she passionately and fearlessly rebukes him for the murder of her husband and father-in-law, “Blush, blush thou lump of foul deformity; for ’tis thy presence that this blood from cold and empty veins…” She does not tremble when this devil stops the funeral procession, “What do you tremble? Are you all afraid?” but she plainly tells Richard without fear “Thou hadst but power over [Henry’s] mortal body, his soul thou canst not have; therefore be gone”

Anne is disgusted by this vile man and she expresses this with wit and intelligence replying quickly to every comment Richard makes. When he says “fairer than tongue can name thee, let me have some patient leisure to excuse myself” Anne replies fiercely with “fouler than heart can think thee, thou canst make no excuse current but to hang thy self” She plays on his very words by structuring her retort in the same manner as his line. “Fairer than tongue can name thee” is paired cleverly with “fouler than heart can think thee” and this is purposeful. Anne has no intentions of allowing Richard to control the conversation. When he says “I did not kill your husband” she comes back with “Why, then he is alive” because she has no intentions of allowing him the upper hand.

There is not a passive note to Anne’s actions. She says what she means; she does not hold back her anger saying “In thy foul throat thou liest”, “thou must be damned for that wicked deed”, ‘thou unfit for any place but hell” even spitting on him. Yet at the same time there is a balance to her which does her credit. She is angry and feels wronged, but Anne is merciful still. When Richard offers her his breast at sword point she refuses to kill him, “…though I wish thy death, I will not be thy executioner.”

Anne’s strength also lies in her power to admit her faults. She is insightful enough to realize that she is the cause of her own ruin by marrying Richard, the fiend she despises, “within to small a time, my woman’s heart grossly grew captive to his honeyed words, and prov’d the subject of mine own soul’s curse.” She knows that for a moment she was seduced and that she must now pay the consequences “besides he hates me for my father Warwick; and will, no doubt soon be rid of me”. There is no weeping widow unable to stand her ground, there is no shamed woman unable to comprehend the situation. Anne fully expresses herself in the presence of the very man that murdered her husband as she knows full well how Richard accomplished his task in seducing her. She is not in denial nor is she crying out “woe is me”. Anne’s fault lies only in her humanity which is where her strength lies also.

Both Juliet and Anne are strong characters because they make their own decisions. Though a modern audience may not agree with their decisions these characters think and have insight, wit and maturity. These women are consciese of their humanity and imperfection and are aware of their emotions decisions. Both these women show fearlessness ahead of their time.

Strong or Not so Strong, that is the Question. (2020, Jun 02). Retrieved from http://studymoose.com/strong-not-strong-question-new-essay 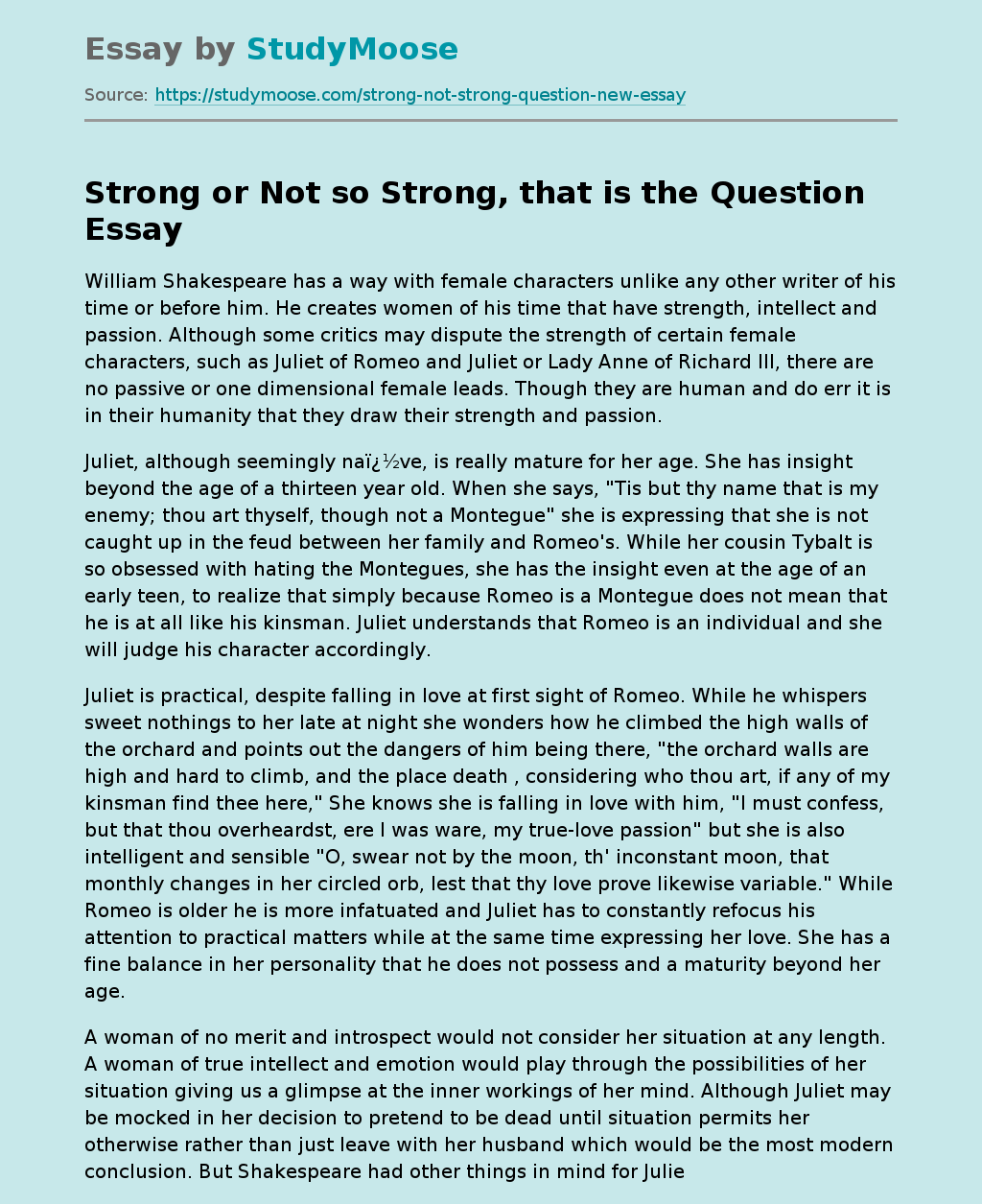