The functional areas of a business such as Toyota have to operate together in an efficient manner or there will be a variety of negative consequences.

Don't use plagiarized sources. Get your custom essay on
“ Functional Area 10 Mark Question – examples of Toyota and a small farm business ”
Get custom paper
NEW! smart matching with writer

Or the marketing function might include wrong information about the new car. Either of these things will result in a weak advertising campaign, attracting less customers to buy the car and therefore lead to a loss of profit for Toyota. Another consequence could also be damage to Toyota’s reputation due to incomplete information for customers.

If the finance function did not work effectively with the other functional areas at Toyota then these other departments might over or under spend.

If they over spend then the costs to Toyota will increase which will mean less profit. If they under spend then it might result in lower quality output such as a substandard advertising campaign or a lower quality car produced. This could lead to a loss of customers. Or the human resources might under pay employees leading to lower motivation and therefore less productivity.

The most important consequence to Toyota of the functional areas not operating together efficiently is the loss of customers. This is because it is the factor that will lead to the biggest loss of profit, which is the main reason why a business like Toyota exists.

Derek and John employ ten workers all year round on the farm. Between them the two partners, their wives and the ten workers ensure that the activities within each of the functional areas of the business are completed. Derek and John also employ seasonal workers as and when required. In addition, Freya, John’s wife, looks after the accounts. The farm ship has now been opened and is run by Natasha, Derek’s wife.

Evaluate the possible consequences to the efficient operation of Gorse Hill Farm if the functional areas do not operate together.

Although it is a small business, Gorse Hill Farm and shop still has all of the functional areas and all of the tasks need to be done otherwise the farm will not be successful.

Derek and John employ the workers for the farm therefore represent the human resource department. Freya, John’s wife looks after the account and so represents the Finance department. If these two functional areas did not operate together then the employees might not get paid the correct amount or on time. This might lead to worker de-motivation in which case the employees might eventually leave, meaning that the brothers would have more work to do. With there being a lot of different tasks on a farm this could have seriously negative effects on the business.

Natasha runs the Farm Shop and so represents the Marketing Function. If she did not operate with Freya, the Finance Function, then she would not know how much money she had to spend on promoting products in the farm shop. If she overspends then this would take money away from other areas of the farm. This could negatively affect the efficiency of the farm therefore negatively affecting profits. If she under spends then customers might not get persuaded to buy products in the shop, meaning a loss in profit.

Losing employees or having them de motivated is the main consequence of the functional areas at Gorse Hill Farm not operating together. This is because employees on a farm a crucial due to the amount of work that needs to be done. 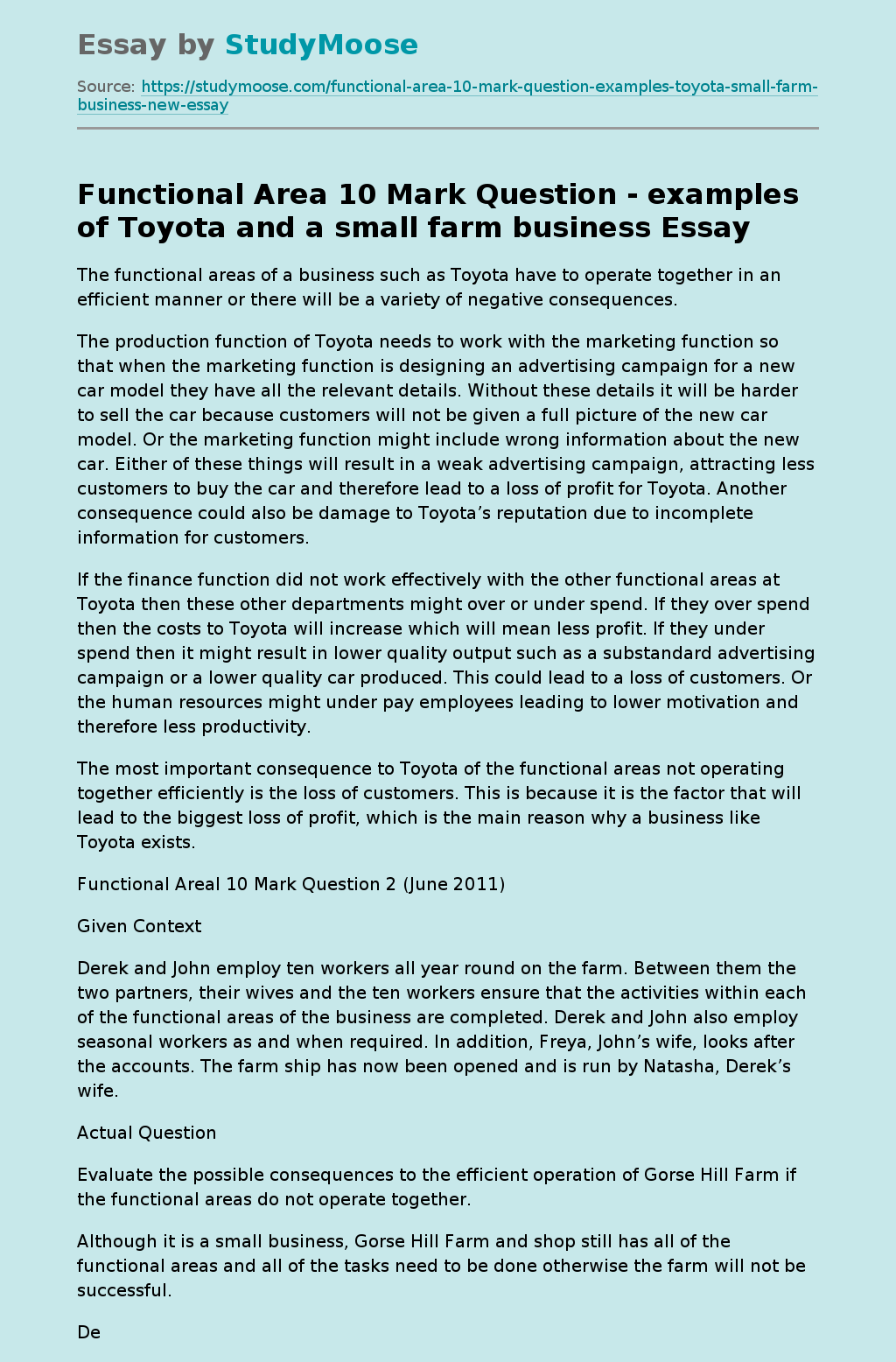