Factors Contributing to the Growth of Enterprise and Small Business

For example: – In USA small businesses represents 99. 7% of all employers, it represents 26% of America’s exports and they create 80% new jobs each year. Growth and success of a business can be measured on many different variables which also includes annual turnover, profit and employment growth. As in other businesses small businesses have been helped by factors which had contributed to its growth.

Growth in small businesses has been aided by policy measures by the government which has supported these small businesses, the macro-economic factors, industry factors and firm-specific factors.

Don't use plagiarized sources. Get your custom essay on
“ Factors Contributing to the Growth of Enterprise and Small Business ”
Get custom paper
NEW! smart matching with writer

Having the intention, the ability to setup and grow, getting the right opportunity, easy access to finance, favorable rules and regulations and market conditions which are aimed at small businesses have also led to the growth of these businesses.

People are motivated to start their own business where they have greater control of the business, can stay independent , can manage the business in their own way, the financial freedom, the potential income they can earn as their aims are to reach the top of the table, the amount of financial gains they achieve and the joy of winning which is driving factors for the entrepreneurs as it helps satisfy their achievement instincts.

Everybody wants to be their own boss and this is also one of the factors for starting up your own business.

Lucy Martin, author of “Make it your Business” said “Whatever your situation, there is likely to be a combination of ‘push’ factors (propelling you out of current jobs and situations) and ‘pull’ factors (which attract you to self employment)”.

Countries with low income or in developing countries more small businesses are being setup because of the push factor as there is a high number of unemployment and people are forced to start-up their own business. In high income countries or developed countries small businesses are increasing due to the pull factor as more and ore people are interested in setting up their own business go become independent. [pic] Sometimes businesses fail or people get frustrated and it is at this time that they need to remind themselves what motivated them to start their own business and this motivation and dedication has led to their growth and success. According to Schumpeter entrepreneur is an innovator as he/she brings about a change and introduces new technological processes or products and brings in new ideas which are necessary for a business to grow.

He also said that only certain people have the ability to become an entrepreneur and to perform extraordinary tasks. Small businesses are the ones that tend to grow faster than large businesses. They indicate higher number of employment growth. Small businesses accounts for more than 50% of the employers in European Economies. France, Italy, Spain, Greece, Germany and UK are the leading economies of the European Union where small Businesses have been thriving for the past two decades and where small businesses accounts for more than 50% of the total employment.

HSBC started a new loan program called “SMALL BUSINESS LOAN” which was quick and easy to arrange loan facility for long term use and had many key benefits. Customers can choose to make their first repayment either one month after taking the borrowing or defer the first repayment until three months after drawing down the loan, Customers had the flexibility to choose the repayment period which was between 12 months and 10 years, the interest rate and repayments will be fixed for the life of the loan.

HSBC recently launched a $5 billion working capital fund to ensure small businesses had access to credit during the current economic crisis. In 2008 alone more than 32,000 small businesses have switched to HSBC because of higher lending fees and banks reluctant to extend loans. Growth of small businesses depends on the type of business they are doing, location of the business (a retail shop should be better placed in the residential area) and most importantly the ownership of the business.

Governments in some countries (UAE, Saudi Arabia) have gone as far as allocating lands to small business owners; small businesses are encouraged to setup as the government provides 5 years of tax free operation to businesses with potential growth and they provide financial assistance with low interest rates as well as assign a team to monitor the growth of the businesses. Rental and electricity charges are lower for small firms and the government is also getting small construction businesses to get involved in the construction industry by giving them subcontracts for some of the projects.

In UK the government started a programme called “The Business Support Simplification Programme (BSSP)” which aims to make it easier for small companies and entrepreneurs to understand and access government funded grants, subsidies and advice with which to start and grow their businesses. Small Businesses were given incentives and taxes were lowered so as to help them setup. Setting up of this programme had a huge influence on the growth of small Businesses. In March 2008 the Government launched the Enterprise Strategy.

The Strategy’s vision is to make the UK the most enterprising economy in the world and the best place to start and grow a business. It was designed to unbolt the entrepreneurship talents in UK, provide a boost to enterprise knowledge and skills, support new and existing small business getting access to funding for start-up and growth and decrease the burden of regulations in place particularly for small firms. The government wants a culture of enterprise and business innovation which will have a great effect on the economic growth. This new strategy has strengthened the Government upport to small businesses and has allowed SME’s to set up more easily and with a proper regulatory body monitoring the growth. Small Businesses are flexible, more focused, specialized and creative and these are some of the reasons why there is an increase in the number of small businesses . Flexibility is what drives some people to start their own business. For example: – (if a person is expert in any subject, field or have some extraordinary skills he/she can work as a consultant where the work timings are set by him/her self and the amount of time spent also).

Growth in business demands creativity. It is what will separate you from the competition. A business had to be different as this is the best way to create awareness. Being different and greater creativity are also the factors which has influenced the growth of small businesses. Being innovative and inventing new things is also a factor which drives people to start their own business. People would have some different business idea of doing something in a different way and this leads to creativity and innovation.

Small businesses are easy to setup as the cost of starting up is not very high. Government supports the setup of small business because they want to break the monopoly in the market and there will be a decrease in the number of unemployed as more and more people will become self-employed. Lower opportunity cost also attracts people towards entrepreneurship. Economies with high unemployment can be pushed towards entrepreneurship. Examples are Brazil and India.

Some people would like to pursue a particular desire or hobby so they enter in to entrepreneurship, it can be leisure driven and it gives flexibility to the owner as there can be work-life balance. More and more specialized people are starting their own business in the field they specialize as they can deliver better services and products. Specializing in a particular product or service gives you the upper hand in the market you are in as you will have the skills and knowledge of the product you are manufacturing or selling.

Specialization has also led professional people or extra ordinary skilled people in to starting up their own business. Gaining inspiration from famous entrepreneurs have also led to the factor that people are ready to start up their own business thinking one day they might be like Donald Trump, Hugh Heffner or Richard Branson. Becoming famous and wanting to be recognized in the world is also a strong feeling which had pulled people towards entrepreneurship as there is a strong desire attached with it to pursue their perceived goals.

Gaining fame and recognition is one of the strong factors which have led people to start their own business. In general, I conclude by saying that small businesses have been growing because they thrive for independence and the owners usually have a feel good factor while running their own business. It gives them a chance to show the level of creativity in them as they won’t be able to do so while working in other companies. Small Businesses are the key to innovation and without their support the economy would fail drastically.

Small Businesses are not always successful but having proper business idea and creative mind plus knowledge of market will help the entrepreneurs in getting their business on the right track. As SCHUMPTER proposed that it was the exceptional creative drive of independent entrepreneurs that led to the introduction of radical new products and the creation of new industries. This radical drive to invent, innovate and create something which is new to everyone has been one of the major factors in the growth of Small and medium sized businesses (SME’s).

Factors Contributing to the Growth of Enterprise and Small Business. (2018, Sep 09). Retrieved from https://studymoose.com/factors-contributing-to-the-growth-of-enterprise-and-small-business-essay 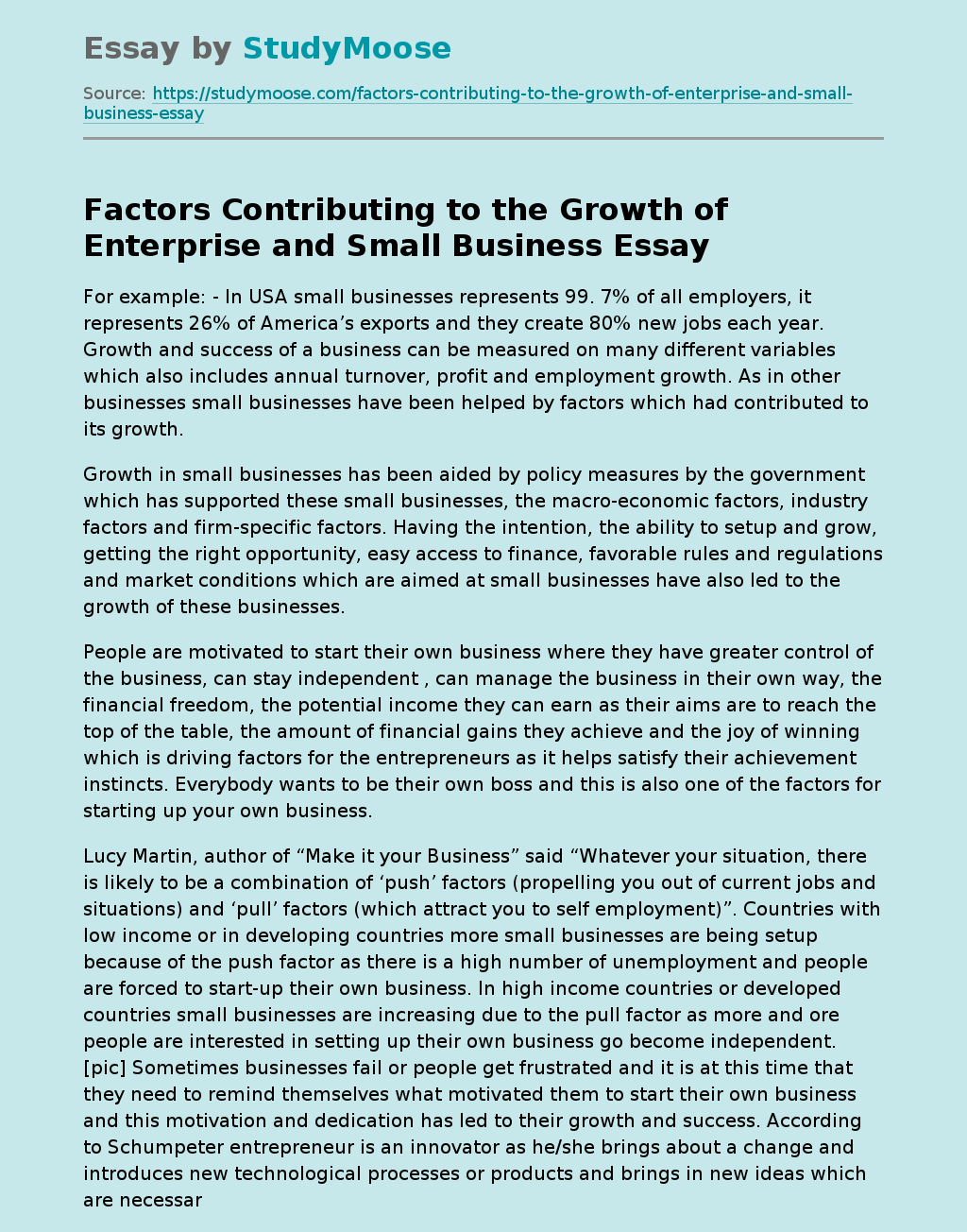