From the Explorer's Daughter Essay

How does Kari Herbert convince the readers for the necessity of hunting whales in the arctic region? You should comment on: 1=the geographical and living conditions of the native people. 2=the use of argumentative language. 3=the language If people in the arctic region won’t eat what they have, i. e. whales, then what will they eat? Should they think of saving the extinct animals or saving their own lives? This is the argument stated by Kari Herbert and she has indeed confused and convinced the readers by the use of argumentative language throughout the passage and especially in the last paragraph.

Don't use plagiarized sources.
Get Your Custom Essay on From the Explorer’s Daughter Just from $13,9/Page

But the inighuit people animals they kill’ Kari Herbert, from the beginning, is creating an atmosphere of sympathy towards the inighuit people using adjectives like, ‘harsh environment’, ‘remote settlement ‘and ‘snowy wastes’ for their habitat. She informs us that there is no other source of food (no plants) except hunting whales due to extremely low temperature. She succeeds in giving us evidences and proofs by giving us even the smallest details of the area and the whale in the strap lines and proving that hunting is not a sport but a need for the inighuit people.

She has even used local language or jargons to tell that nothing of the narwhale is wasted or thrown away and that every part of a narwhale helps them in this or that manner – even the things which would have been worthless in our eyes are made useful like the skin is used as a source of light and heat ‘For centuries the blubber of the whales was also the only source of light and heat. ’ They depend on a narwhale not only for food but for almost everything, ‘it was part of their staple diet’ Kari Herbert goes through a difficult time in this passage and sometimes she gets emotional, ‘my heart also urged’, sometimes excited and tensed.

The hunters were close enough to touch the narwhale with their bare hands and yet they never moved’ and sometimes taken over by conflicting thoughts ’It was a foolhardy exercise and one that could only inspire respect. And yet at the same time my heart also urged the narwhale to dive, to leave, to survive. ’ With all her moods her language changes – sometimes emotional and sometimes argumentative. This autobiography is fulfilling two roles-informing us about the narwhale and life in the arctic while also revealing the author’s response to the events she witnessed there.

And both the roles have fulfilled one purpose that is the necessity of hunting in the arctic region. She has made this clear by also stating the risks and dangers in hunting these whales, risking their lives, their wealth and the safety of their family just to hunt a whale, not because they like it, because they need it, because it is their staple diet and their want to keep breathing and not dying.

From the Explorer's Daughter. (2017, Jan 05). Retrieved from https://studymoose.com/from-the-explorers-daughter-essay 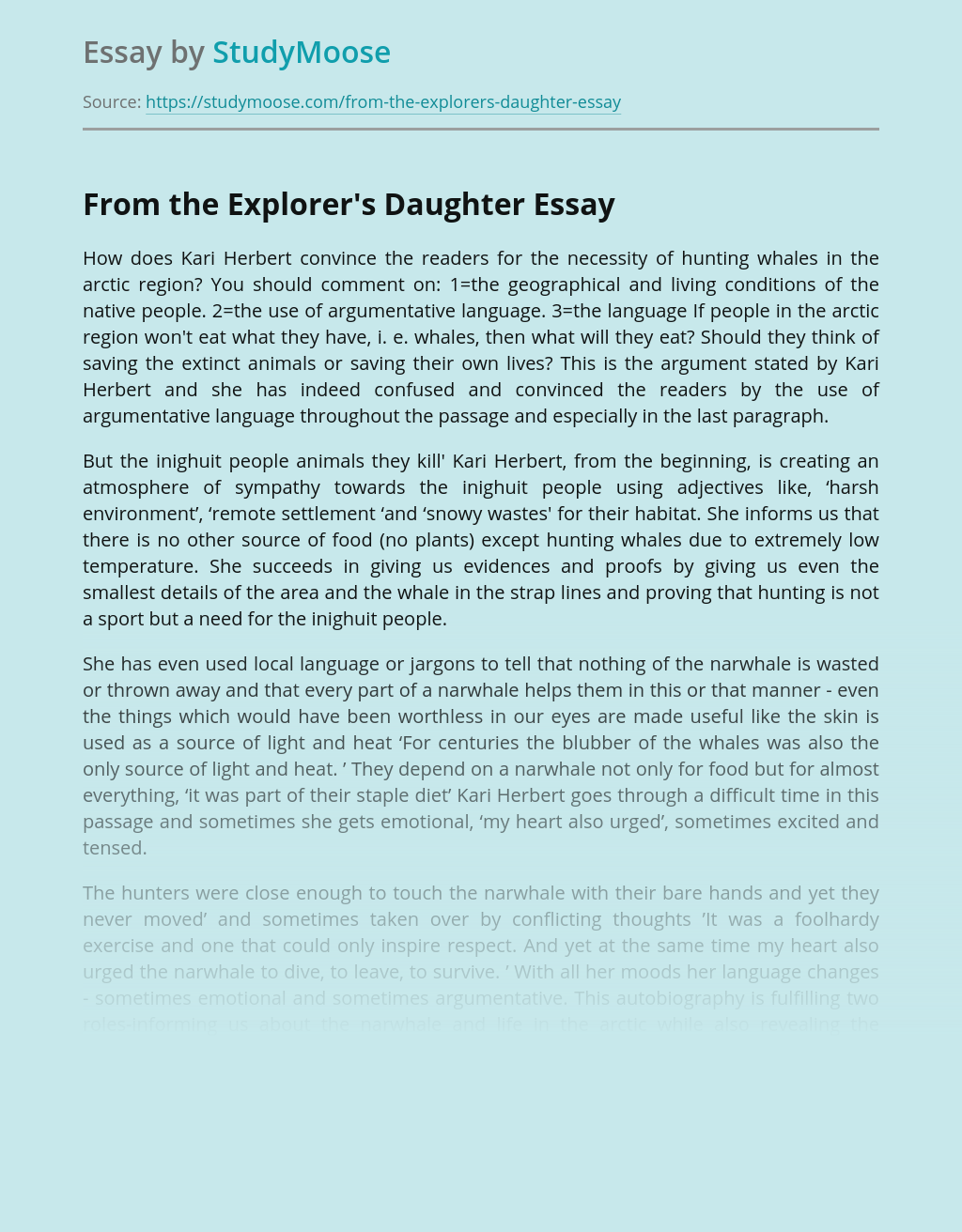 Energy drinks consumers are generally bellow 35 years of age. The industry targets teenagers, young adults and athletes. Workers are also included in the market segment for this product. As regards to customers description, recent studies has pointed out that 65% of energy markets are male (Energy Drinks Market, n. d). Consumers are usually single... VIEW ESSAY

Abstract While reading International Relations I got acquainted with many contemporary issues which are really important to deal with for the competitive survival of Bangladesh in this age of globalization. Bangladesh is a developing country. It has to perform very carefully in order to continue a healthy and sustainable economic system. Bangladesh suffers from both... VIEW ESSAY

View sample
Get Essay
The Comic Scenes in Doctor Faustus

In any tragic or serious play, the dramatist tries to give relief to the audience by introducing comic scenes or episodes. The literary term for such comic interludes is known as tragic relief. A tragedy is bound to create tension in the mind of the audience and if this tension is not relaxed from time... VIEW ESSAY

Introduction This assignment will demonstrate the knowledge and understanding of why it is important for all staff to be consistent and fair when applying boundaries and rules for children and young people. Also outlining the implications that inconsistent application of rules may have and applying the rules and boundaries in accordance with the policies and... VIEW ESSAY

In February 23, 1986, 2 million of Filipinos gathered 4 days along Epifanio delos Santos Avenue, more popularly known as EDSA, but in 1959 it is called as Highway 54. 25 years later, the multitude still converges on EDSA every day, comprising a vibrant complex entity of society. In 2006, Howie Severino and his I-Witness... VIEW ESSAY