Song of the Whale. About whaling in Japan

4th- ultrasonic-high pitched, comparing it to the sound of birds chirping.

Don't use plagiarized sources. Get your custom essay on
“ Song of the Whale. About whaling in Japan ”
Get custom paper
NEW! smart matching with writer

Birds soar in sky, they soar in water 5th -Just use them- think they are big dumb creatures- highly intelligent 6th – in the forest- sea –comparison / heard the whale cry and singing 7th – we will always kill you and not realise that you are important/ not protect you/not chose to let you live/ instead use for your body Poetic devices Sound Devices Song of the whale is composed by Kit Wright and offers insight on the issue of whaling.

The poem depicts the emotions of the whale as it is being slaughtered. The poem also depicts what the body of the whale is used for.

This poem informs the readers that humans do not realise the importance of whales to the food chain and that whales should not be executed. The message the author is portraying is that whaling is inhumane. Various sound and poetic devices are used to enhance the meaning of the poem. Poetic techniques used include metaphors. A metaphor can be seen in stanza 1, line 1 which states “Heaving the mountain in the sea. ” By comparing the mountain to the whale, the author provides the readers with a vivid image of the whale as a big creature.

Different sound devices are used, these are repetition and assonance. Repetition is used in the 1st, 4th and 6th stanza, which states “Whale I heard you. ”Repetition is used to convey sympathy for the whale. Assonance is used in the poem to enhance the structure. Through the use of visual devices the poems meanings is effectively conveyed and are also used to convey emotion throughout the poem. Wole Soyinka uses two main literary devices to drive home the message of the poem.

The first of the two is imagery. Right at the beginning, the imagery used to describe the mental image the man has of the woman: “lipstick coated, gold rolled cigarette holder piped”, just from listening to her voice shows one that he thinks that she is, socially speaking above him, from a higher social class. Then when he hears her question regarding how dark he is, he is so humiliated and angry that he sees red everywhere. The imagery of the huge bus squelching the black tar is symbolic of how the dominant white community treats those belonging to the minor black one. The next most evident use is that of irony.

In the beginning of the poem, the African says that he has to “self-confess” when he reveals his skin color to the lady. The color of his skin is something that he has no control over, and even if he did, it is not a sin to be dark skinned, so the fact that the man feels ashamed and sorry for this is ironical and casts light on how ridiculous racism is that one should apologize or be differentiated against solely because of the color of one’s skin. Also, it seems almost comical that anyone should be so submissive when he has actually committed no mistakes.

On the other hand, the lady is continuously described in positive terms, suggesting that she is of a good breeding and upper class. Even when the reader finds out that she is a shallow and racist person who exhibits extreme insensitivity by asking crude questions, the man seems to think that she is ‘considerate; and her clinical response to his question shows only ‘light impersonality. ’ The repeated and exaggerated assertions of the woman’s good manners and sophistication drip with irony as her speech contradict this strongly.

Also the basis of the woman rejecting to lease her house to the man is because of the prejudiced notion that African Americans are a savage and wild people. This idea is completely discredited by the ironical fact that throughout the poem the man retains better manners and vocabulary than the woman, using words such as “spectroscopic” and “rancid”, whereas she does not know what West African Sepia is and is inconsiderate in her inquiries. Using irony in this manner, Soyinka proves how absurd it is to judge the intellect or character of a man depending on the color of his skin only.

The poem deals with a foul subject, that of racism and prejudice, in a lighthearted, almost comical manner. A most important device which Soyinka has used to highlight this sense of racism, which was previously widespread in western society, is that of the telephone. Had the person been speaking face to face with the lady, this whole conversation would never have taken place. She would have either refused outright, or would have found a more subtle way of doing so. The whole back and forth about ‘how dark’ the man is wouldn’t have occurred.

Thus the telephone is used to make the issue of racism clear and prove how nonsensical it really is. Written in an independent style and delivered in a passively sarcastic tone, this poem is a potent comment on society. Soyinka might be speaking through personal experience, judging by the raw emotions that this poem subtly convey: those of anger, rage, shame, humility and an acute sense of disgust at the apathy and inhumanity of humans who won’t judge a book by its cover but would turn down a man for the color of his skin.

In today’s world, racism might be a dying concern; but that does not mean that discrimination against other minorities has been completely eradicated. Despite the progressing times, people continue to harbor prejudices and illogical suspicions about things they do not understand: may it be others ideals, religions or traditions and customs. Thus this poem remains a universal message for all of us, as Soyinka manages to convey just how absurd all prejudices are by highlighting the woman’s poor choice of rejecting the man just because he does not share the same skin color.

‘Telephone Conversation’ is a favorite, both for its excellent use of rich language and the timeless message it conveys. Unquiet Grave is ballad composed by an unknown poet who describes the life of a person who has lost his loved one. Each stanza describes grieve and anguish that he feels for the person he has lost. The poet seeks to portrays the poem with deep understanding of emotion. The poet has used many.

Subject- Reminiscing and grieving about a loved one, moral move on in life as everyone has to die one day, Ideas- Moving on, happiness, time to grieve and a time to move on, reminiscing Flower analogy Love, happiness, sadness, pain, anguish, conflict and conclusion comes for his love saying that he needs to find somewhere else to, needs to move on in life Convey emotion , portray Emphasis points Imagery Symbol conveys meaning through represents, idea or meaning symbols are used for identification The Sea Telephone Conversation Bora Ring.

Song of the Whale. About whaling in Japan. (2016, Sep 14). Retrieved from https://studymoose.com/song-of-the-whale-about-whaling-in-japan-essay 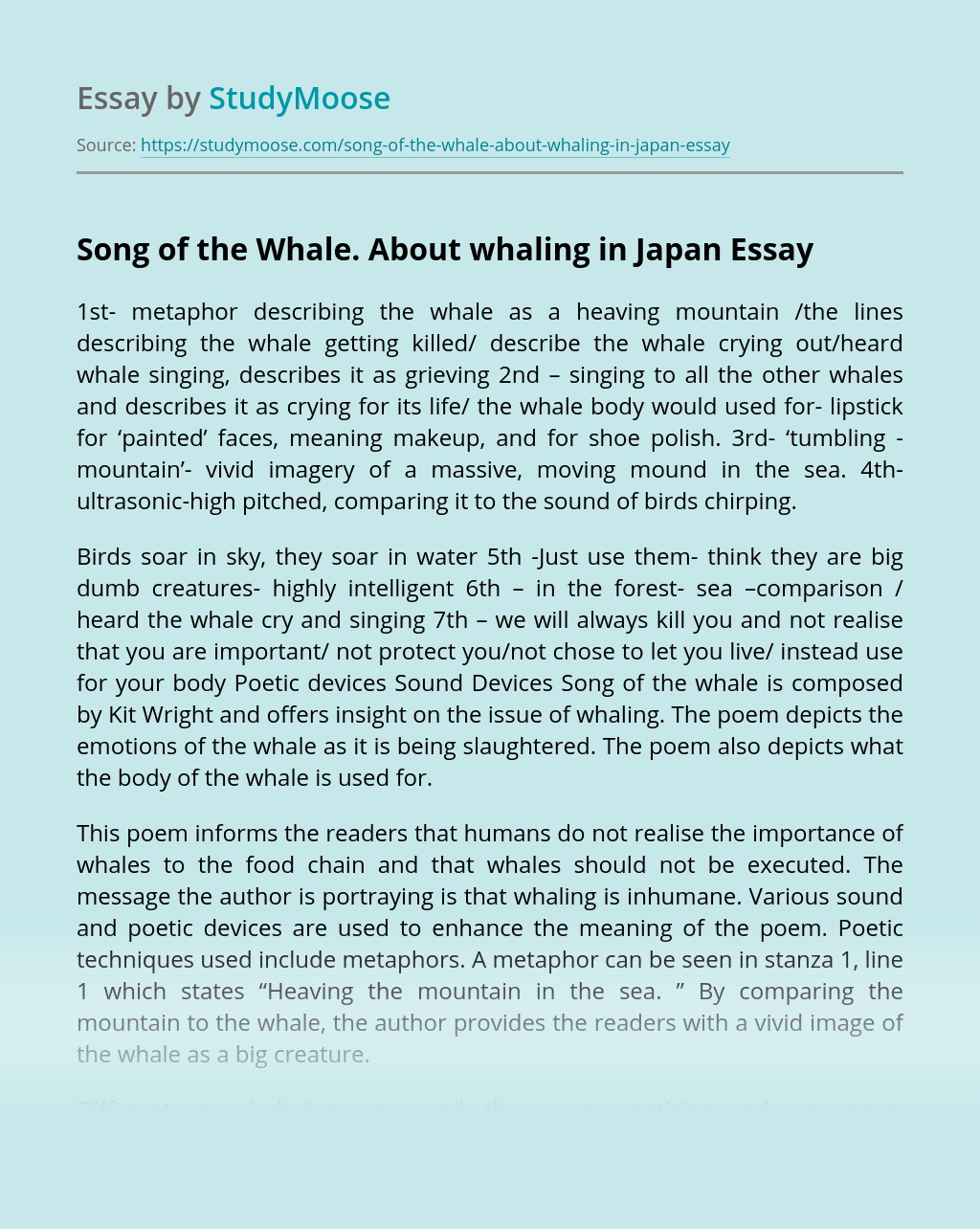