From Classical Hollywood to New Hollywood

The movies Rebel Without a Cause and Bonnie and Clyde offer two prime examples of the difference between “Old Hollywood” and “New Hollywood. ” Rebel Without a Cause was released in 1958 and, although it pushed the envelope for movies at that time, it still was very much a depiction of “Old Hollywood. ” Bonnie and Clyde released in 1967 was one of the first films of “New Hollywood” in that its style, acting and storyline moved it into a new generation of filmmaking.

In this paper I will analyze these two films and contrast their different styles and also show how Bonnie and Clyde set a new standard in the filmmaking industry.

Don't use plagiarized sources. Get your custom essay on
“ From Classical Hollywood to New Hollywood ”
Get custom paper
NEW! smart matching with writer

I will also look at readings from class and draw from them in order to back up my discussion. Rebel Without a Cause (Old Hollywood) “If I had one day when I didn’t have to be all confused and I didn’t have to feel that I was ashamed of everything.

If I felt that I belonged someplace. You know? ” (Rebel Without a Cause, 1958). This quote was from the protagonist Jim Stark who is a 17 year old whose parents just moved to Los Angeles.

His parent’s fight often in front of him and his mother is very domineering toward his father and Jim doesn’t like this. He feels his dad is not man enough to stand up for himself and he sees him as being week. Even though his father loves him a lot and shows him affection, Jim wishes he was more of a man.

Throughout the movie he tries to tell him that he needs to just stand up for himself and set a good example for his son, but his father doesn’t get it. He’s just too used to being bullied around by his mother. Jim even goes so far as to say that he never wants to end up like his father.

This was just one of the many films during the fifties that depicted the youth of America as being insubordinate and not having the same moral makeup as past generations. This film also looks at parenting styles and how they affect the youth at that time. The main character Jim continuously gets into trouble as a result of his confusion and detachment from his parents. The style in which the film was made goes right along with what was being done in that era. The acting, at times, was very over dramatic and the dialog was sparse and very “clean”.

The high school kids were rebellious and got into fights, but there is very little blood and the discourse was very civil. Up until the fifties, the movie business had grown exponentially and was dominated by about eight different studios located in Los Angeles. Small budget films were being made at the time but wouldn’t make money simply because the “Giants” had all the talent and money to produce large-scale productions. At that time it was also accepted that the larger the amount of money put into a film, the more it would make.

It was published to the public amounts that were invested into the films (Maltby, 113 – 125). In the postwar period, the foreign market became an even more important source of income to Hollywood. By the early 1960’s foreign sales generated about half of the majors’ revenues…but instead of bringing European stars to Hollywood, American production migrated abroad (Maltby, 127). So part of “New Hollywood” was it’s presence abroad and actually filming and producing films in foreign nations. However, not many were ready for the movie that, in essence, changed how filmmaking was done.

Bonnie and Clyde (New Hollywood) “This here’s Miss Bonnie Parker. I’m Clyde Barrow. We rob banks. ” (Bonnie and Clyde, 1967). Directly influenced by the “French New Wave” style of cinematography, Bonnie and Clyde broke all of the rules associated with “Old Hollywood”. The film portrayed sex and violence on a graphic level not really ever seen before. And, although, the movie started out as sort of a comedy, it quickly turned dark as the violence began. Many different societal taboos were broken regarding sex and violence.

This new style also included a more “real” form of filming in that it was more graphic and the filming itself was more choppy. The comedic way that it depicted violence along with its quickly shifting tone toward the dark side of violence was something new at the time. Since the production of Bonnie and Clyde many others followed suit in its overt display of sex and violence in the movies. “The impression created is one of restlessness, edginess and a palpable sense of sexual hunger and longing” (King, 12). Clyde is a thief that meets up with Bonnie while he’s trying to steal her mother’s car.

She falls in love with him and they go on a bank-robbing spree together. As they get better at what they do, the level of violence is escalated and the amount of gore depicted in the film rises. Sexual overtones are constant and this entire concept of glorifying sex and violence on film was brand new at the time. During the late fifties and sixties, times were tumultuous in America and Hollywood cinema reflected that. Making connections between Hollywood movies and the times in which they appear is not as straightforward a business as it might often appear.

Sometimes, however, the case seems more clear-cut; the times are such that they appear to impose themselves forcefully on our consciousness, unmistakably invading the terrain of popular entertainment such as Hollywood cinema (King, 14). Because of social events and tragedies that were taking place in that era such as the Kennedy assassinations, the assassinations of Martin Luther King Jr. and Malcolm X, people were longing for films that helped express how they were feeling. Conclusion

Both movies were epic pictures that were preserved in the United States Library of Congress’s National Film Registry and even though their release dates were only twelve years apart, watching them makes you feel as if they were made in completely different eras – which, in fact, they were. Rebel Without a Cause, arguably James Dean’s best film, sort of represents the innocence of America at that time. You feel as if you are watching something that would be rated G today, or would be on the Disney Channel. Bonnie and Clyde represented the direction that America was moving in.

People might not have been ready for it at the time, however, they went to the theaters in drones to see it. It was the start of a brand new era in filmmaking and stands to be one of the founders, if not the founder, of New Hollywood today.

From Classical Hollywood to New Hollywood. (2016, Sep 13). Retrieved from http://studymoose.com/from-classical-hollywood-to-new-hollywood-essay 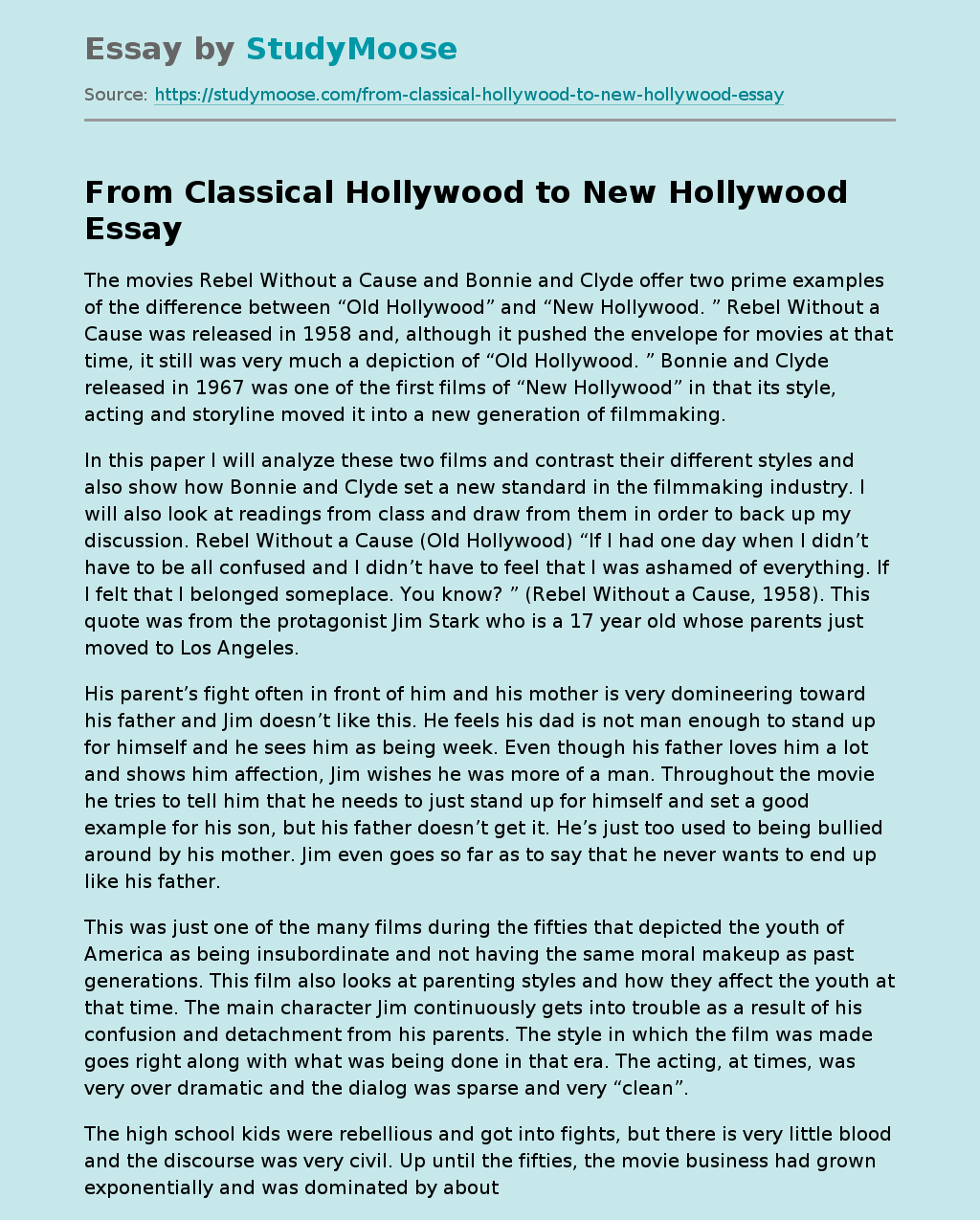